The ups and downs of Homo georgicus

It's not every day you get to see an important fossil but Friday, 1st June, was one of those days for me. Ever since I read a paper in 2002 from a team headed by David Lordkipanidze about a new skull they had found in a place called Dmanisi, I've been fascinated by the hominin called Homo erectus georgicus and what it might mean about human evolution. So, as I'm here in Georgia, ten minutes walk away from the Georgian National Museum, I had the perfect opportunity to go and look at the finds first hand.

As my dad might have said... "Got to see hominins, blady hells".


But before that privilege, I had a few chores to do.

My "hotel" doesn't do breakfasts so I had to go find some. It was a bit frustrating. I found a nice looking cafe on a nearby old Tblisi street sat down and ordered "English Breakfast" (there was no "Georgian" option.) I waited for a few minutes before a guy came up to me and said...

They did have electricity and could still make me a coffee but I had to make do with that before trundling off and buying a cheesy thing from a street seller. 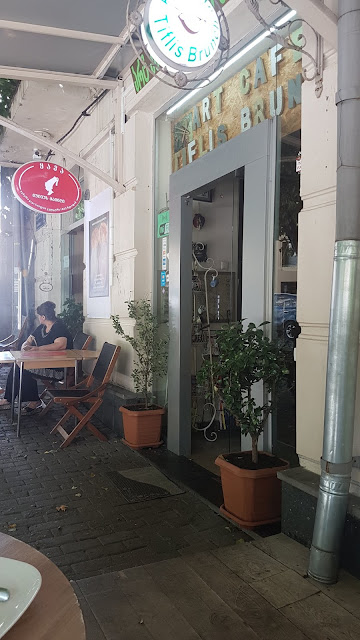 Anyway, chores... I have this routine I do when I go away to help me to travel lighter. Lesley, my dear wife, thinks it's crazy but I maintain that it helps. Basically, before I go away I search through all my clothes and find the crappiest, tattyest ones I have, ones I would happily throw away. And these then become the clothes I wear, in many layers, and squeeze into my tiny travel bag which is basically a small back pack. Then, I wear them a couple of times without bothering to wash them before chucking them and buying replacements.

The point is you're going to get rid of these clothes soon anyway, so why not do so abroad and reduce the number of clothes you have to take or at least the number of times you have to have them washed.
Anyway, my "comverse" training shoes, which I'd bought in Melbourne for quite a bit of money had finally had it. They were literally falling apart at the seams and the night before as I'd trudged home from the wine bar in the rain, they'd got thoroughly soaked through. So I wanted to get myself some new ones. The Galleria shopping center in Tblisi was the perfect place to do so.

I bought new shoes, some new socks, a nice pair of chinos and a new pair of jeans to replace the pair I'd wore most days.

One of the several bizarre fashion statements young people make these days which is beyond my understanding is the way it's become cool to wear jeans with one or more rips in them.

Anyway, I had a pair of jeans which had become ripped at the knee - but only one one leg, not the other. So this didn't make me look cool at all. I suppose I could have faked a rip in the other knee and hoped that people would think I was cool rather than just some pathetic old mad man trying to look cool, but instead, I thought "no, chuck 'em" and bought some new.

The whole shopping expedition was very cheap. My four purchases cost me the equivalent $76 aussie dollars. Bargain! and I've done a bit to help the Georgian economy too. Not that the staff seemed happy about my business in the slightest. I have never known such a grumpy, miserable sales assistant as in this Waikiki store. Maybe she was just having a bad day.

So, after dropping off my new clothes and getting changed into my nice new jeans and shoes, it was off to the museum. But on the way, I couldn't resist popping in for a hair cut at a hairdressers I noticed on my way.

It's another weird little chore I do on these travels. So far I've had one in Lithuania, Thailand, USA, France and ... Brisbane!


The barber was not a happy chappy doing my hair either...

"Do you speak English?"

... was our entire conversation.

But he did a good job and even managed a smile when I asked if I could take a selfy with him in it. (Maybe he was just thinking "dick head".)


So, properly neatened up, I headed off to the museum.


In my dreams I was hoping to meet the main man responsible for the find, David Lordkipanidze but I think he lives in the states now. I had been in communication about my visit with Nino Kokalia who works at the museum and was hoping to meet him/her but he/she hadn't been in touch for months so I had to just go and hope.


So, what is this fossil, anyway?

The Dmanisi finds made the news in 2002 when a number of hominins were found - five individuals at least - and a paper was published in the journal Science about them. 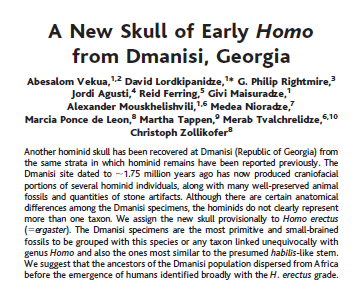 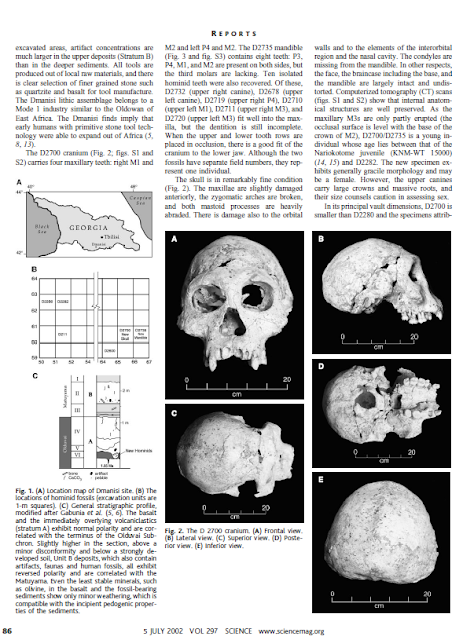 Basically, they represent the earliest hominid to have left Africa at around 1.7 million years ago. It had been thought before this that hominids had first left Africa much later, after their brains had got much bigger, closer to our size, and only after sophisticated stone tool culture had been developed.

The Dmanisi find changed all that. They were short and relatively small brained but could clearly make primitive stone tools, rather like the Olduwan culture associated with Homo habilis in Africa.

The key questions for me were about the Dmanisi site which appears to be a long way from the Black Sea and permanent water courses. A rare blow to waterside hypotheses of human evolution, it would seem.

Anyway, the exhibition was pretty good, even if it was not promoted at all. One could easily have missed it.


As usual, the museum narrative about these hominids stressed a purely terrestrial hunter gatherer life style but there were some clues indicating an association with water. Another frustration I have is with the naming of these species. It's officially been labelled Homo erectus georgicus, so a sub species of Homo erectus but it really doesn't look anything like some of the Homo erectus finds from China or even the Homo ergaster finds from Africa. The brain is much smaller and they're much shorter, for a start. It always seems bizarre to me that many hominins are given their own genus on the basis of just a slight variation in the shape of a tooth and others that are obviously very different are pigeon-holed into the same species.

Come on, taxonomists. Get your act together!

The way the fossils were displayed, on the outline of a figure indicating it's size was pretty good. All the descriptions were in Georgian and English. მადლობა! 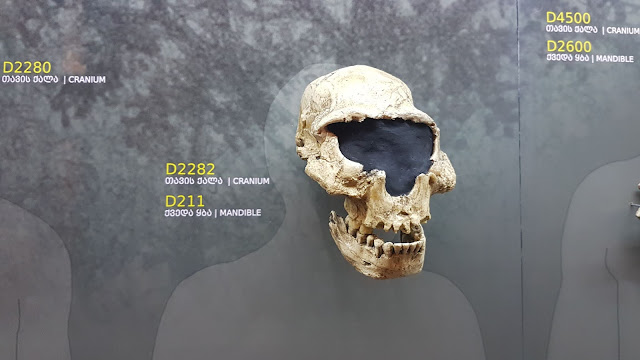 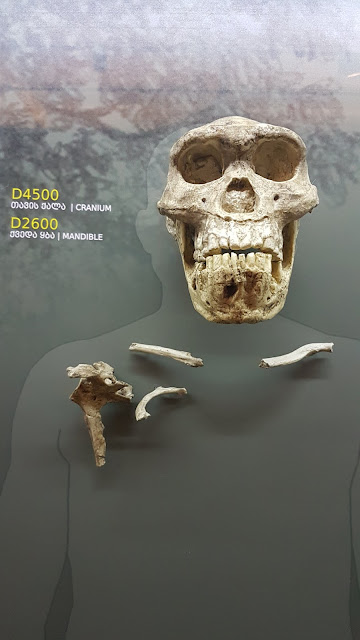 These hominins were unquestionably bipedal but I would love to see an example of their pelvis to see if it was more australopithecine like or more like our's.There's a big difference.

Unfortuanately, as the pelvis is relatively fragile it rarely gets fossilised. Still plenty of bones did get turned to stone to preserve a record of what these guys were like. 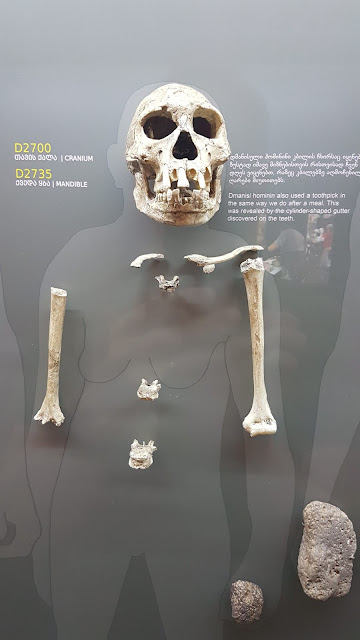 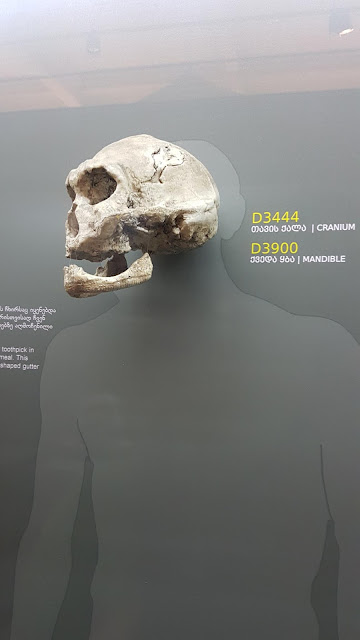 In the main area they had a fine selection of hominin skulls on display including a few I hadn't seen before such as this one...

In a typical "Bongo" Mr Bean moment, I nearly knocked one of the stands down as I was filming a poster as I was walking along. Oops!

Anyway, what does all this say about our evolution?

Basically, to me, it shows that hominins came out of Africa earlier than we thought and that relatively primitive forms did so. When I look at these skulls and see their brain capacity I have to say they look very much like australopithecines to me. Never trust the name given to a fossil hominid by the researcher, I think. Hubris rules in palaeoanthropology.

Although the Dmanisi habitat cannot be called "waterside" in the way I associate with African australopithecines, there was definitely a river close by which, according the text in the museum, would have been far more accessible at the time than it is today.

In order for these hominids to get to Dmanisi from Africa they would undoubtedly have had to have crossed a number of permanent water courses around the current Mediterranean and Red seas.

And a number of turtle fossils were found close by too. 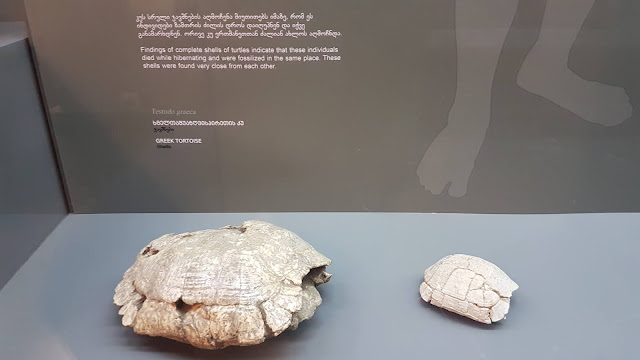 In other (much later) findings from Georgia, near to the Black Sea coast, they found good evidence for coastal life... 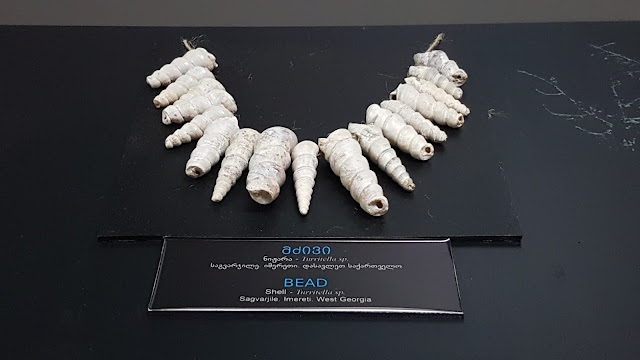 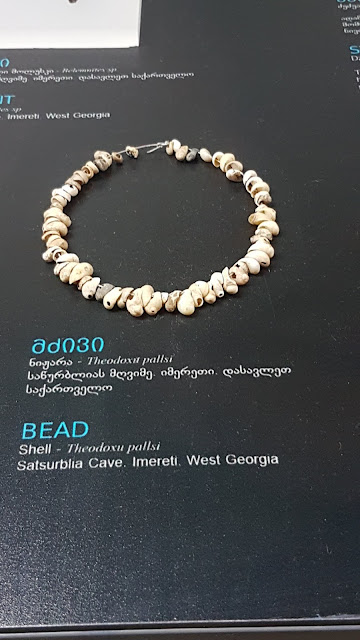 Just like Lithuania (and of course Azerbaijan), Georgia was celebrating 100 years since it first declared national independence from Czarist Russia. The museum also had an interesting exhibit about that too.

Unlike Lithuania, which managed to retain its independence from 1918 until 1940, Georgia was quickly reabsorbed into the Soviet Union and so had further years of repression, ironically, much of it under the leadership of "one of their own".


Anyway, that was a good visit. Afterwards I had a stroll around and took in some more Tblisi sights.


I was getting hungry so after skyping me darlin I headed off to a recommended restuarant called Samikitno, on Meidan Square. They didn't have the wine I wanted so I ended up with a pint of lager and a pleasant enough dish of spicy stew.


Nearby was another recommended place which was also a brewery - so they said. So, I had to go there too, right?

It was two minutes away by the river but the beer was a huge disappointment. I mean what "brewery" makes just one beer? And it was horrible. Still, got to drink it. I never leave beer. Never! It would be rude.

After that, I was desperate to revisit the delicious Georgian wine experience I'd had the night before so I headed back to the place I went, g-Vino.

Perhaps the Alani beer destroyed my taste buds because the wine was not nice at all this time. I tried three types and none of them hit the notes of yesterday. I guess the lesson here is that small, craft, practically home-made wineries can produce good and bad batches.


After this I headed back to Samikitno where the three English chaps I'd met in Baku were eating and drinking. They were on their last night on their trip. Early the next morning they were catching a train taking them back to Kutaisi to catch their WizzAir flight back to blighty. What an intelligent and lovely bunch of chaps they are. At least four or five times Adam made a political point that I agreed with 100% and I couldn't have expressed better. It's music to your ears to hear one of your own cherished opinions eloquently expressed to you by someone else. Oliver and Jon, too, are so knowledgeable.

Cheers chaps, I hope you made it to your train OK!
Posted by Algis Kuliukas at 12:26 AM