Back to the Motherland

I remember once going on a wine tour in the Swan Valley, near Perth, and at one of the wineries sharing a moment with a chap on the tour from England. He was over seeing relatives.

I smiled and nodded.

“England’s gone to pot, mate. Too many blady Pakis, Lithuanians and Romanians.”

I didn’t let on that my dad was a Lithuanian and my mum, Romanian. Perhaps I should have challenged his apparent racism but it’s easier to let these things go, especially when there’s another six wines to taste.

Anyway, yes, my mum was born in Romania. In a little village called Stamora-Germana. The name kind of gives it away. Although this village was well inside the territory of Romania, most of the people living in her village, indeed the whole area, were ethnic Germans or “folk-Deutsch” as they are often called. The region also encompasses part of Serbia and Hungary. It has a pretty awful history.

During the long running wars up to the 19th century between the Turkish and the Austro-Hungarian empires, many atrocities were committed, on both sides, I’m sure. But after one, particularly devastating victory by the “Christians”, a whole area of territory was ethnically cleansed and villages destroyed. In their place, a series of nice, neat, German-style villages were built with a Catholic church in the center and ethnic Germans from all over central Europe were encouraged to go and settle there, presumably with rent and tax breaks and the promise of a better life. I understand my mum’s ancestors migrated from near Strasbourg, near the French border. This was the origin of the Banat.

Now I am sure the Turks did similar terrible things earlier, to claim those villages in the first place but that’s the problem with tit for tat. The vengeance never ends.

I visited mum’s old village in 1983. It was a risky thing to do in those days as Romania was then still under the iron fist Communist rule of Nicolae Ceaucescu. I was only there one night, having got a train from Budapest, through the border town of Szeged and then a bus over the border to the town of Arad, where I waited for a train to the large town of Timoșoara and then to Stamora. This was in the western corner of the country. Timoșoara was made famous for the start of the revolution in 1989 that finally toppled the brutal dictator.

Looking back, I'm impressed I did that trip. This was in the days before the internet, remember. How I wish, now, that the technology had existed then to do a blog like this. All I have is a handful of photos, unfortunately, none of them digitized or accessible from here.

Stamora was a bit run down, even then, and many of the villagers already had left to go to Germany, including my own Oma, mum’s mum, and mum’s brother and sister, Joseph, the oldest and Leni. One of Leni's grand daughters (Lena) went to the same village a few years ago and said there were few Germans there then. In 1983, though, there were still some relatives living there, and I distinctly remember that unfathomable feeling of familiarity you get when you see the face of a cousin for the first time.

I crashed at the house of one of these relations. Anna Klein, I think. A key observation in the village was that in the center was a communal “People’s” garden, which everyone was supposed to contribute to and take from, fairly. It was completely neglected and barren. In contrast, each house was allowed a small patch of land on which people could grow their own stuff. The house I crashed out at was a prime example. Every available square centimetre was put to productive use. There were grape vines, fruit bushes, carrot patches, all tended to with 100% dedication. You know the lesson to draw from that, right?


Romania was my 13th country visited but I only spent a day and a half there overall. Apart from Stamora, I spent a few hours in the town of Arad to the north, waiting for a train. That was an experience in itself. I remember buying a drink of what looked like Coca Cola. It wasn’t. It was some dark, fizzy liquid in a Coke-shaped bottle, but that’s where the similarity ended. I also tried a “coffee”. Think of Baldrick in Black Adder offering a “Cappuccino” and you get the idea there. I think they used sludge. Also, I remember a queue of at least 50 people lined up on the side of the street waiting to buy washing up powder as it was delivered from a truck. It never even made it into the shop, which only had stacks of jars of pickles and nothing else. To keep order, there were two soldiers with machine guns.

Things have moved on a lot since then, of course (at least I hope so!) And I have long had the desire to re-visit Romania and in particular its capital, Bucharest. So this was the next stop on my agenda: 35 years on, a return to my mother’s homeland. 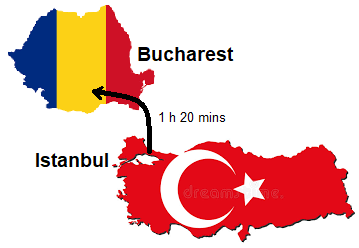 I was relieved to leave Istanbul in the end. The very unsavoury (metaphorically but not literally) episode at the fish restaurant left a bad taste in my mouth (also metaphorically, not literally). It’s horrible feeling you've being scammed. I really resent it. Sure, I was the dumb arse. What was I thinking buying lobster, in any shape or form, in a big touristy area of a big city like Istanbul? Am I an adolescent or something?

The waiters were very clever. They sure made a fool out of me. Congratulations to them. In football terms, I got thumped 8-0. But, really? Is this what it’s all about? Can you not go to even a decent restaurant in a big city and trust the staff not to rip you off? What do they think this will do to their reputation? I certainly will post something about it on TripAdvisor and Google.

But remember. You can’t tar everyone with the same brush. The Alpek hotel was great. The staff were 100% honest and the taxi transfer service they used was impeccable. Almost everyone I met was the same. The fans at Beșitkaș were sweet. Istanbul is, as David, the Celtic fan I met in Paris two years ago said, a must-see city. It has, in particular, the most spectacular geographic location. I’m really glad I went.


Looking ahead to Bucharest as I waited to check in, I h a few hopes and plans.

3) Visit the stadium of Steuau Bucharest (or whatever it’s called these days) and/or the national stadium.

4) Try some local wine and food (but be very frugal!)

5) Maybe, do a day trip to a Transylvanian castle.

Fingers crossed I get some good luck. I think, on average, I’m owed some. I’ll also start drawing my attention to the World Cup which is now just five days away!

The flight over went very smoothly. It was with TAROM (Transport Airlines of ROMania, I think it stands for) - the Romanian national airlines. I couldn't help but feel sorry for them. They didn't have the latest jet planes with all the features one might expect but they did a good job and got me here safely. 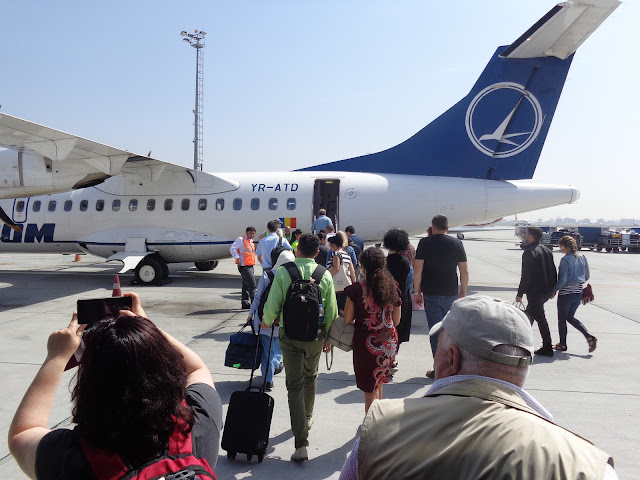 The plane headed east to the Black Sea after take off, giving me a great view of the full length of the Bosphorus...


This is the 4th country I've spent for than a few hours in and it's the 4th currency. Wouldn't it be good if someone thought of a way of having one currency for several countries...

Once arriving, I made sure I bought a public transport card and used it to catch the 783 bus to the city center. Amazingly, the bus has free WiFi on board. As we passed Ceaucescu's famous white elephant, the Parliamentary Palace, I bizarrely had a text conversation with my brother-in-law, Jeffrey. Maybe he's going to pop over and meet me in one of these cities!

The hotel is great. Right near the bus stop in the Old City. After a shower and getting changed I Skyped Leb and then booked a tour to Transylvania tomorrow morning.

I've already had a few opportunities to practice a few words of Romanian, like "Thank you" (Multumeșc) and "please (Va Rog). It's much easier to understand than the others so far, as it's a Latin language and so had echoes of French and Italian. I have a database of languages and words/phrases to learn. No 1 on the list is thank you but in Armenian I never got past that No 1 - despite 10 or so attempts. It's five syllables for heaven's sake. Here, in Romaniania, I've already used most of the top eight...

Here's Paul again. Another great talk on the Romanian language...

I also found a wine shop and bought a nice bottle of red to keep in the room. I had to cross the Unirii Boulevard, the massive thoroughfare that leads directly to Ceaucescu's Palace to get there and back. Then I found a place to eat. Not quite bread and water, but it was very well priced considering how delicious the food was. 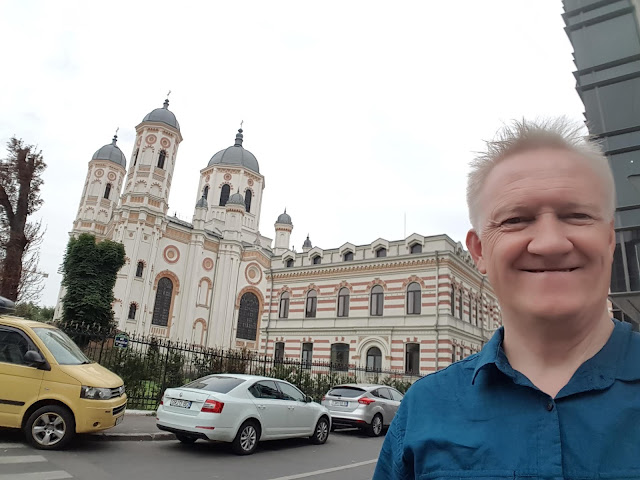 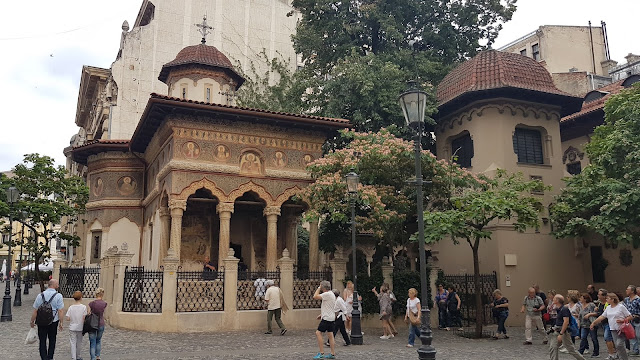 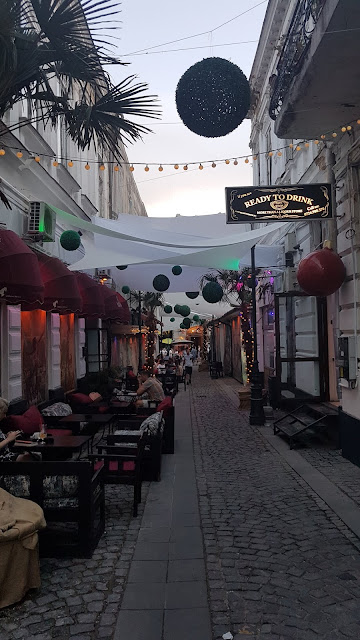 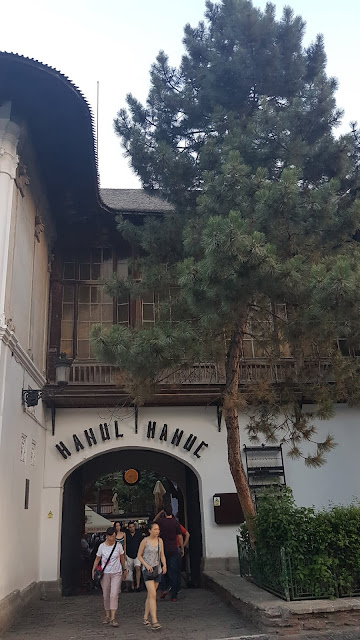 There was a good bit of sport on today. Many bars here, with thousands of people in them, were glued to the screens watching Simona Halep win her first grand slam tournament, beating the American, Sloan Stephens, in the French Open.

I was hoping to watch Australia's 2-1 win in a friendly against Hungary but I couldn't find a bar that was showing it. Instead I watched that odd sport with a squashed ball where the referee's penalty decisions seems as important as anything else - rugby union. England narrowly losing in South Africa in their first test there.

I was almost tempted to go out into the suburbs of Bucharest to watch a League 1 (Romanian First Division) play off match between FC Voluntari (a suburb in the north of Bucharest) and Chindia Targovista - but thought it would be a bit too much. I'd never even heard of the two teams. It was actually shown on the TV in one of the bars I went to but it wasn't a great match. Voluntari won 1-0. The second leg still to come.


So after having a walk around he old town, visiting a couple of bars, I came back here to my room and did my blog and had a few glasses of delicious Romanian wine.

I'm getting a bit more into the World Cup at the moment and put in my "predictions" (i.e. potential results based on wishful thinking) on the tournament on my mobile phone App "FotMob". They have a cool way of displaying the knock-out predictions that I haven't seen before. I think it's really cool.


Talking of cool charts, the BBC posted a great page the other day with a whole series of info-graphics about the World Cup. 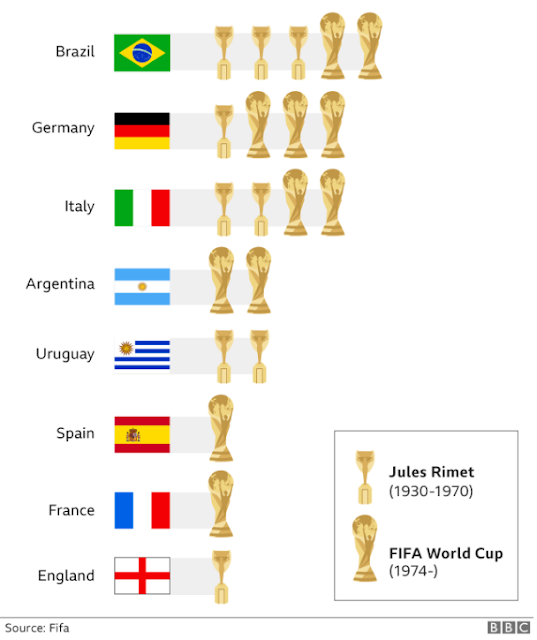 See how the big three (Brazil, Germany and Italy) have won it 13 times between them and the rest of the world only 7 times in total. I hate that. More equality, please!

Here's another interesting one...

and this one. which shows how much advantage a team gets playing at home...


Ah well, enough of  football stats. I'm having a day off football tomorrow and going on a bus trip to Transylvania.

But overall, a good day then. No goof ups and no unlucky twists of fate for a change.

Posted by Algis Kuliukas at 1:18 PM