Ok. Quick one today as I am literally on the road.

My guts settled down very quickly during the walk and in the morning I felt fine. After a nice breakie at Novo Hotel (when I did yesterday's blog) I figured I only had an hour before I had to check out and about two hours before I had to leave. So much to pack into so little time.

One of the things I'd read about Armenia was that they are very good at chess and have taken it on as a kind of national sport. I read there were chess clubs and bars where people went to play and chess schools, specifically to train master-classes. I thought it would be cool to go to one of these clubs and play a game - and obviously get thrashed - before I leave.

Petrosian was Armenian but born in Tblisi.

Another Armenian, Levon Aronian, is also in the current top 20 World Chess rankings...


So started another drama. I Googled "chess bar" and "chess club" and it came up with one that was just 15 minutes walk away. Perfect. I found the same place on MAPS.ME and set off.

When I went to take a photo of the swan it swam straight at me and attacked me. Near miss there. It would have been a typical Mr Bean moment if the swan had pecked my mobile from my hand.


I got to the street and stood outside the spot where the little finishing flag was pinned but it was not a chess club and it was closed. After making a few inquiries at neighboring bars, I was told it was under new ownership. He didn't know where they had moved to. So much for that idea. Frustration 101
It wouldn't have been open in the morning anyway, apparently

Back to the hotel, I packed and checked out and asked them if they could look after my bags while I went off again for one last (proper) look at the Cascades.

On the way, I did a little bit more shopping and then did a walk through the circular park, a kind of mini-green belt around the circle that is Yerevan.

When we went with Viko the last three escalators had closed but this time I could go right to the top and then walk down the 556? steps to the bottom. 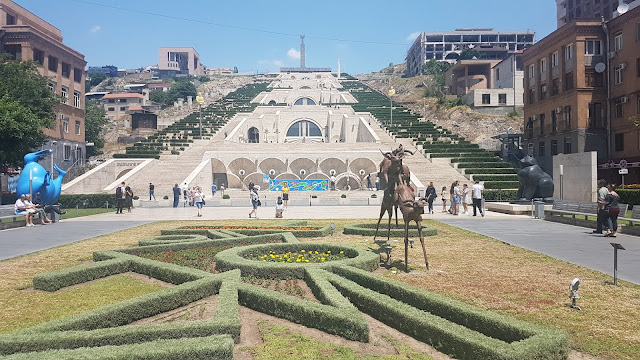 Unfortunately the haze over Yerevan blocked the view of Mount Ararat, but at least I saw it perfectly the first moment I'd opened my eyes in Armenia.

Next, I picked up my bag and set off for the airport. Professor Google told me that there was a regular bus service from a metro station to the north of the city, near the Cascades where I had just been. I should have gone to look for the bus when I was there but the hotel staff told me, quite confidently, the the only buses to the airport went from Republic Square, so I took their advice.

I set off early, with the plan of finding the bus stop and then having a bite to eat while I waited. I was told that the buses would be clearly marked but I couldn't see any. I asked around and some taxi types told me that the buses would come along the street next to the square, two or three pointed me at where abouts that would be. So I sat at a cafe and had a beer while I waited. I asked the waitress there and she said "no" no buses come here, they all go over there (pointing back to the square where the taxi wolvws were). They had no WiFi so I couldn't do any Googling, so I paid my bill and went over the road to a popular cafe chain that promised "Super Fast" WiFi.

Whilst there I ordered lamb chops, salad and ... an Ararat Cognac (6 years) - Got to!


Anyway the food was delicious and, surprisingly to me as I don't really like spirits, so was the brandy.

I chatted to a few friendly locals for a few minutes while I checked the internet again. It seems that multiple sources confirmed that the only place to catch a bus to the airport was, indeed, from Yeritasardakan metro station. Time was a ticking so I hatched a plan to get a taxi to take me to the metro station and then catch the bus from there. I walked back to republic square, hailed down a taxi and told him where I wanted to go.

"No problem" he grunted.

"Why you go there?" he asked

I told him I wanted to catch a bus to the airport and his face lit up.

This did seem pretty reasonable to me so I smiled and nodded.

Alexander spoke pretty good English and so we were able to have a decent chat on the way to the airport. He has two grown up sons that work in car maintenance. He was from Tblisi and had a house there and often went back. As he lit up a fag, he offered to drive me there! If not now, "next time". I thanked him and took his details down. I don't think so, really.

Anyway, after pretty bad traffic in the city center it was a smooth ride to the airport where I arrived before check-in had even opened.

All good. After a bit of a comical time getting through security - every time I went though there'd be a beep and I was told to take some item of clothing off and go back. Watch. Belt. Shoes. I had just started to think what was coming off next when I passed through without a beep.

Time to relax and spend my last Dram on a bottle of water. (I'd given Alexander three thousand as he did save me a lot of hassle.)

It was also good to see that Yerevan airport was getting into the World Cup... 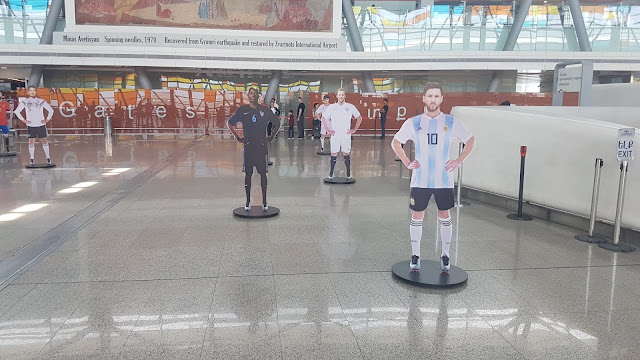 Finally, I boarded the plane and found that I was sat next to a beautiful young (young enough to be my daughter, I should add) Armenian girl called Svetlana Avetisyan who was on her way to a Wine makers marketing workshop in Tblisi. We had a great chat about wine. She certainly is an impressive young lady. Very smart. She also loved travel and had recently been to China. Then, after getting off the plane, I got to chat with some of her colleagues too. What a lovely bunch. I got some good tips on finding a winery near Gori, my next destination.

Again, one is always so impressed (and envious) at how these young people are so fluent in English and at least two other languages.

So, if anyone is interested in Armenian wine (and you should be) here are their business cards... 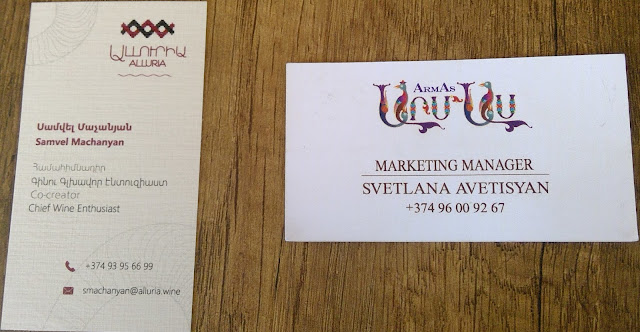 Ok. I'll leave the next adventure - picking up the car and driving it away (many more dramas, I can assure you) until the next one I'll do tomorrow.

Off to Gori now to see Uncle Joe.