60th Country up in Moldova

When the break-up of the Soviet Union occurred in 1991, one country became 15. One of the 15 was Moldova, formerly the Moldovan Soviet Socialist Republic. As I'd never been, it was an obvious choice to include on this trip. It's the 60th country I've been to. Just a one night stop here to sample the famous Moldovan wines and then I'll be off to Odessa to meet an old pal, my football guru, from Nottingham University to watch the first few games of the World Cup.

I had originally intended to get the train (or bus) here from Braşov but the timing was awkward so I opted to fly again - my eighth flight so far - almost half of the flights I'll do.


This was day 15 out of 55, so I'm into the second quarter, in AFL/basketball terms.

It was another early start for me in Bucharest. I set my alarm for 5 am and I was at the bus stop at 5:30. The good old 738 with its free Wifi. A very good idea. Thanks Romania, I really appreciated that. It means you can do all sorts of checking on the way to the airport. 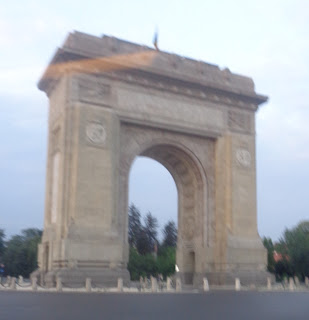 The queue for the check-in was a bit long but I got through with time to spare. I suppose the memorable point here was a really fastidious person on the security scanner. I was wondering why the queue was taking so long but when it was my turn I got to see exactly why. She helped herself to my bag going through all the pockets (things like mini camera stands, power cables, spare pairs of reading glasses etc) and put them out onto a tray and then re-scanned them. It's a good job I'd done my wash the other day or she might have had to handle a couple of pairs of my shit-stained pants!

Anyway, eventually I settled on the back row of the sweet old propeller driven plane next to a man who was obviously so besotted with his new son or daughter he spent the entire flight gazing at photos of the baby on his mobile. At least it wasn't a live, screaming, one. 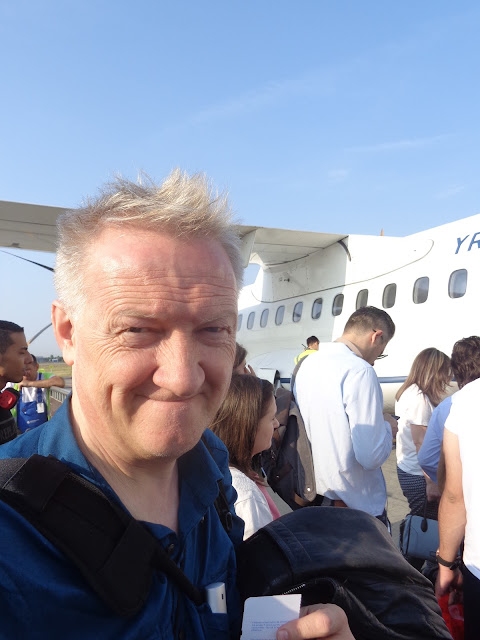 I had a great window view but, frankly, was disappointed that I never saw the Carpathian mountains as I was expecting. It was pretty flat all the way, actually.

Arriving at Chişinau (Pronounced "Kishinow") was exciting as always and I followed my now practiced routine: Get Cash. Get Wifi. Download Maps. Find out about bus. In this case that it wasn't a bus, it was a trolleybus - a bus run by electricity through overhead cables.

Moldova have their own currency called the Moldovan Leu. 100 Leu is worth about 5 Euros. The notes are paper and small, reminding me of the old Soviet rouble notes.

The trolleybus fare to the city, some 11 km away, was 3 Leu - or about 24 Australian cents. You pay on the 'bus to a conductor (remember those). I was a tiny bit slow getting off at my stop and my exit was then swamped by five or six people getting on. After they did so, I tried to get off and stepped toward the door but they slammed shut. In my experience if you stick you hand out the door usually stops closing (presumably as a safety feature.) Not here. The door slammed shut with my hand and part of my leather jacket stuck in it.

Luckily the edges of the door have big rubber panels otherwise it could have been nasty. The conductor called the driver to stop and let me off. 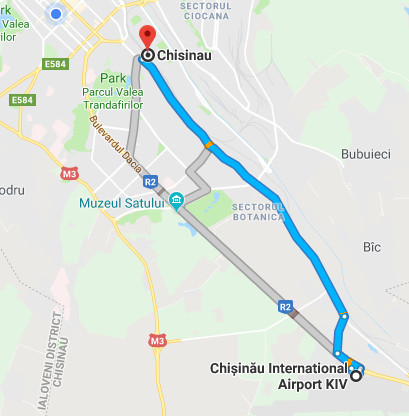 I found a bar to have a drink and connect to the Wifi to see where my hotel was. Perfect. Just 400m down the road. I finished my beer and strolled along. I was early but again they kindly let me sit in the restaurant area and have a fruit juice until the room was ready. I worked on yesterdays blog as I waited. 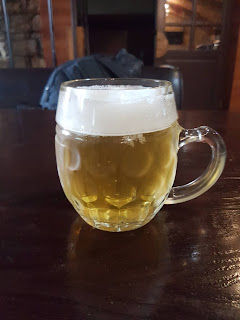 It was great to have a shower and get changed.

The key thing I had to do was to make sure I had a bus ticket to Odessa for the next day so I set off for the North Bus station on foot as a mini adventure. It was about a 50 minute walk across the city, which bigger than I thought. Chişinau has a population of around 686,000, so about the size of Sheffield. It was very hot, it felt like it was in the high 30s, so I was relieved when I got there.

After a bit of struggle with my Russian numbers, I managed to buy a ticket for 11 am the next day.

The key sticking point was whether to go through Tiraspol and the self-proclaimed independent state of Transnistria, or not. It's a very complicated and quite confusing part of the world.

Historically the local region was called Moldavia, the word derived from the local river, which is called the Moldova. It was part of various empires but, ethnically, as far as I can learn, they originally spoke a dialect of Romanian. The principality was defined as the land between the Carpathian mountains in the west and the Dniester river in the east. As always, regional powers mess things up. The territory has been carved up and bits of it absorbed by one power or another of the years. Each ruling power has had its influence over the time they were in control.

Lithuania even controlled the area at one time (them wo t'days!) and so did the Ottoman Emprire up until 1812. You might think this is where the term "Bessarabia" comes from - something to do with "arabia". But not, apparently, it's to do with a word "Besarab" which meant Wallachian prince.

I said it was complicated.

The Czarist Russian empire then occupied the territory until 1920 when it became part of "Greater Romania". About time, I'd say!

But in 1940, after that man Joseph Stalin, contriving with that other fellow, Adolf Hitler had signed the Molotov-Ribbentrop pact the year before, the Soviet Union gave Romania an ultimatum to cede the territory to them.

During the war, Moldova flipped sides several times but afterwards Stalin managed to re-establish Soviet control with the formation of the Moldovan Soviet Socialist Republic. That's the way it stayed until the collapse of the USSR in 1991.

Following the pattern elsewhere, Moldova then became an independent state. But, of course, that wasn't a solution that satisfied everyone, especially many ethnic Russians who had settled there and were quite happy being part of the Soviet Union. Bizarrely, for a reason I can't quite fathom, there seems to have been a particular concentration of these ethnic Russians close to the river Dniester and the border of Ukraine, who were so determined not to go along with the Moldovan majority, they decided to split away and claim independence for themselves.

This territory across the Dniestr, became called "Transnistria". It has it's own police and government. It is not recognised by any member of the UN, not even Russia. The only recognition it gets is from similarly self-proclaimed areas controlled by Russian majority people in newly independent states. As I saw earlier, Georgia has two such regions, Abkhazia and South Ossetia.

So, it's a bit awkward for me to think about going through Transnistria. In one sense I should have gone that way as it means I'd get to go to a 61st country (if they're ever internationally recognised) but there stories on the interweb of corruption and difficulties crossing their border twice. I decided best to avoid.

Anyway my ticket avoids Transnistria and it's capital, Tiraspol. I will cross the border directly from Moldova into Ukraine.

I was getting really thirsty so I stopped for some Kvass (a slightly alcoholic - 0.5% - drink made from Rye Bread)

For the walk back I went a different route and ended up strolling through a big market place. I bought some cherries and ended up in a cafe to connect to the internet again.

My next adventure was to go to Zimbru stadium - Moldova's national football ground. I'd passed it on the way from the airport so I already knew where it was generally. All I needed was the guy in the cafe to tell me which bus (not bus, "troll AY bus") to catch. It was No 22.

So I had to spend another 2 Leu (16 cents) to get there. It's a nice, neat looking ground with a capacity of 10,400. As I arrived they gate was locked but a small group of youngsters were arriving to do some voluntary work and so I managed to get in with them. Amazingly though, despite my pleas and the pleas of these youngsters, I was not allowed to walk 100m to the edge of the pitch and take a photo.

What a contrast with Bucharest where I was led onto the center of the pitch just before a big event.

I ended up pushing my camera through the gate and taking some zoomed in photos anyway. I walked to the other end of the ground where the gate had actually been left open but I didn't want to get arrested so I chickened out of going pitch side from there. 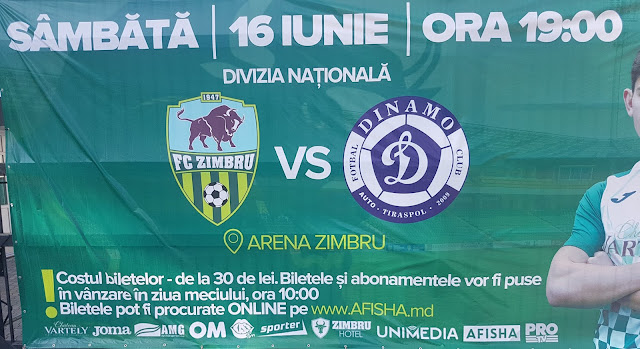 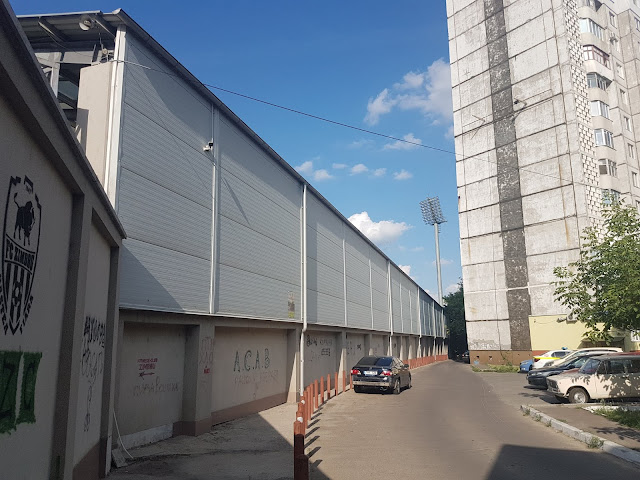 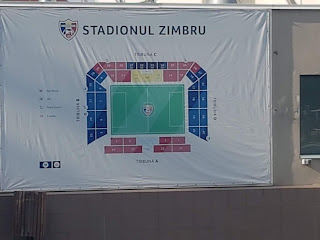 Anyway, England fans may remember a great performance from the team there in September 2012 in a qualifier for the last World Cup in Brazil, 2014.


Moldova, with a population of just three million, are not a strong football nation and are currently ranked 173rd in the list, the worst of all the countries I'm visiting on this trip.

Needless to say, they didn't qualify for the World Cup and finished bottom of their group, collecting only two points.

After that, it was back to the city to rest my feet for a bit before going out to sample some of the famous Moldovan wines.

Again, we're so lucky to be living in the days of the internet and social media. I'd never been within 500km of here before and yet, thanks to Google etc I could quickly suss out the best places to go.

I chose Envino Enoteca, a ten minute walk away and I was not disappointed. They have one of the best (in terms of comfort and bar height) I've ever been to and the guy that runs it was very helpful in selecting three very nice reds for me to try. 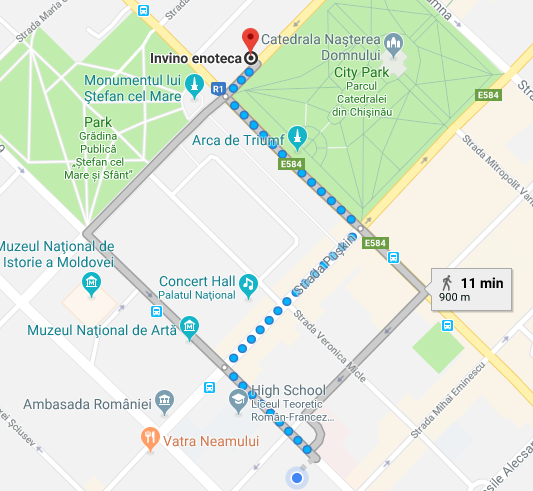 Like in Romania, a lot of the local wine producers use the grape fetească neagră, which I am really getting to love. Across from me was a local Moldovan (I think he was a guide) and an Austrian guy. As they were talking in English I couldn't help but earwig onto their conversation, and occasionally join in. 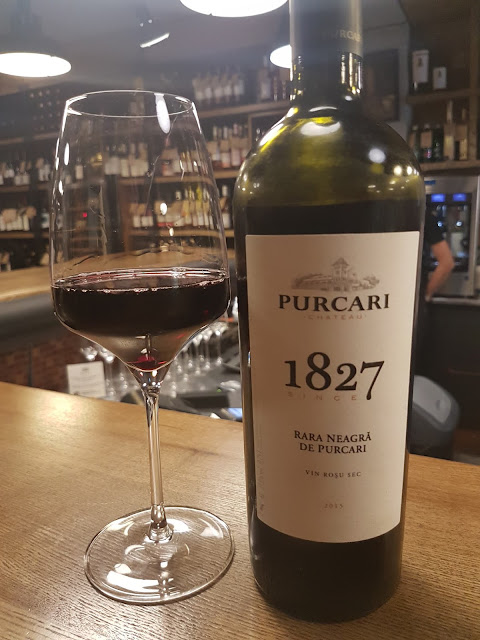 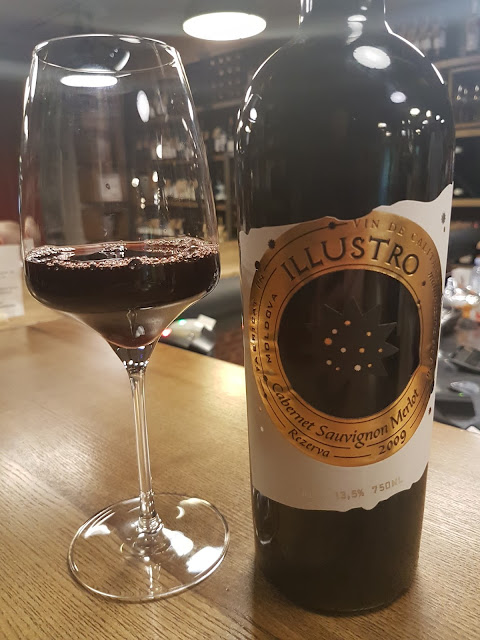 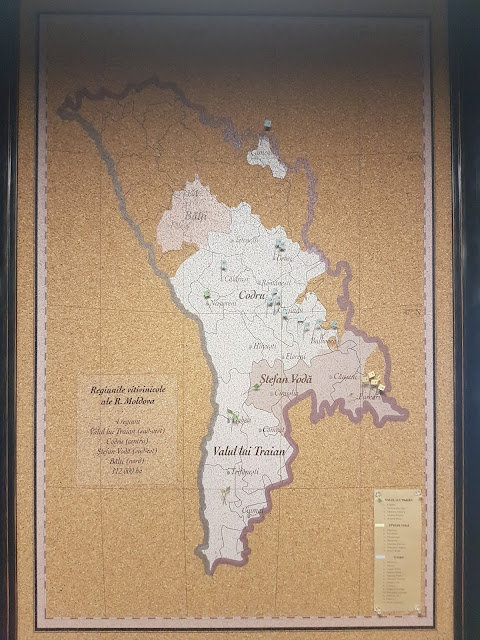 We spoke about the ethnic mix of Moldovans and why they hadn't reunified with Romania. I told him that since I'd arrved this morning I hadn't heard a single person talking in Romanian. Maybe they had been, and I just hadn't realised, but I had definitely identified many people speaking Russian. He told me around 60% of the population of Chişinau were ethnically Russian and that some Moldovans would like for them to join Romania but in a referendum they'd held, only about 15% had voted 'Yes'. 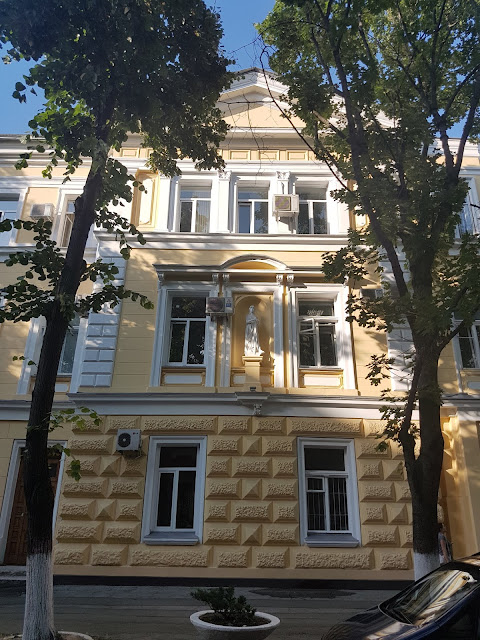 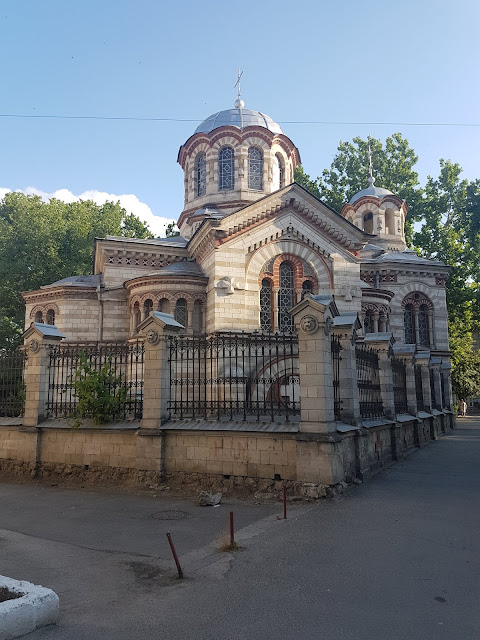 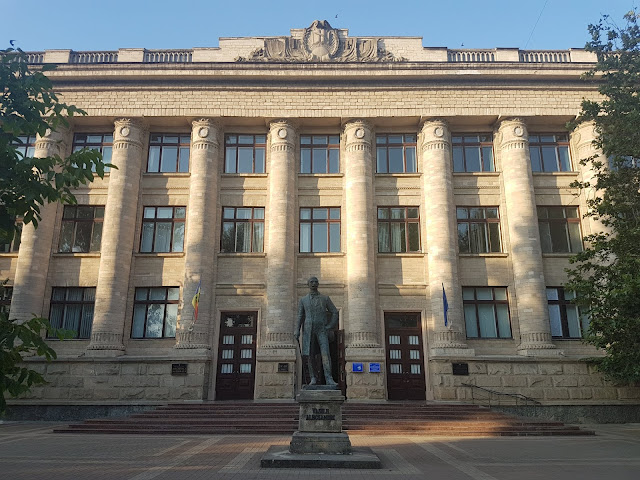 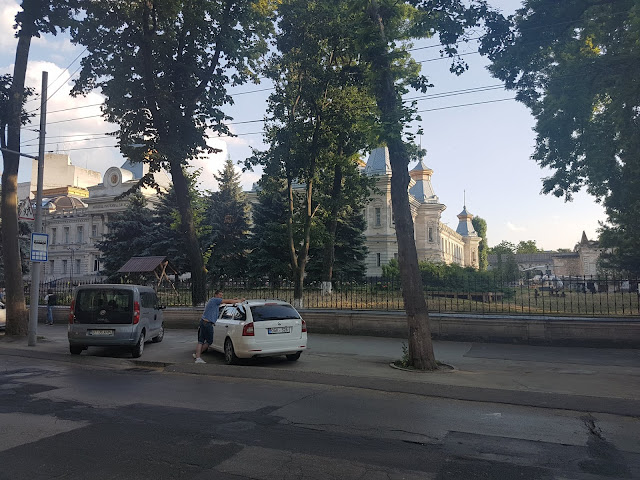 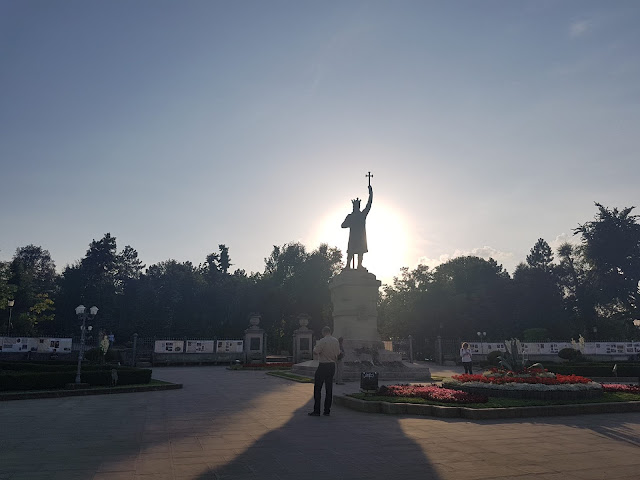 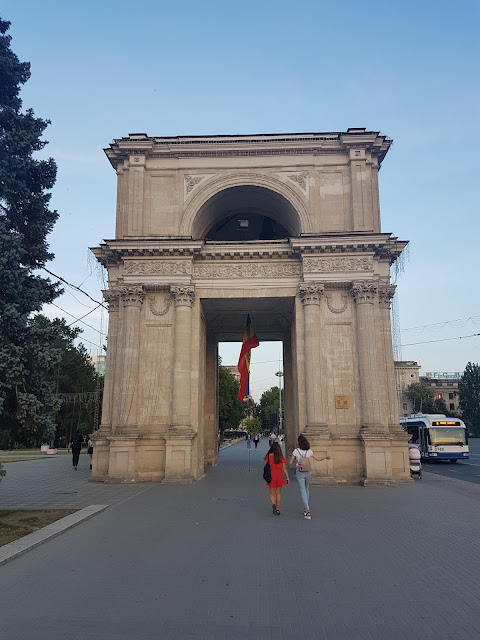 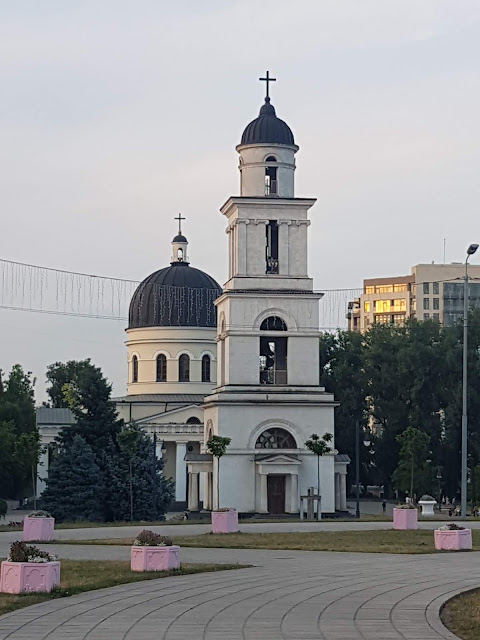 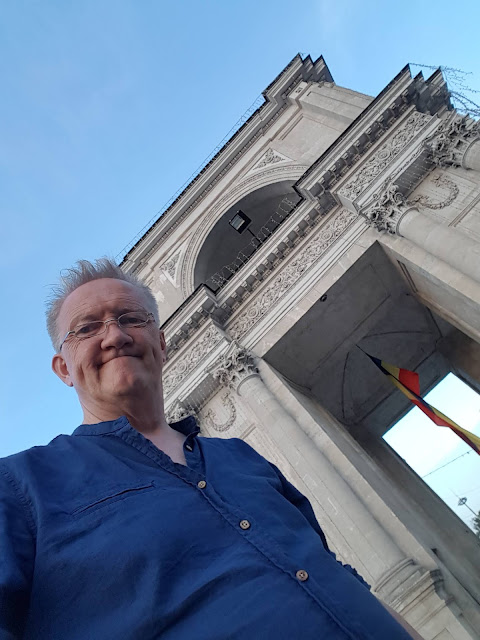 After that I went for a Moldovan dinner at another restaurant selected with the help of Google. Two delicious courses, a lovely half bottle of red all for about $35. 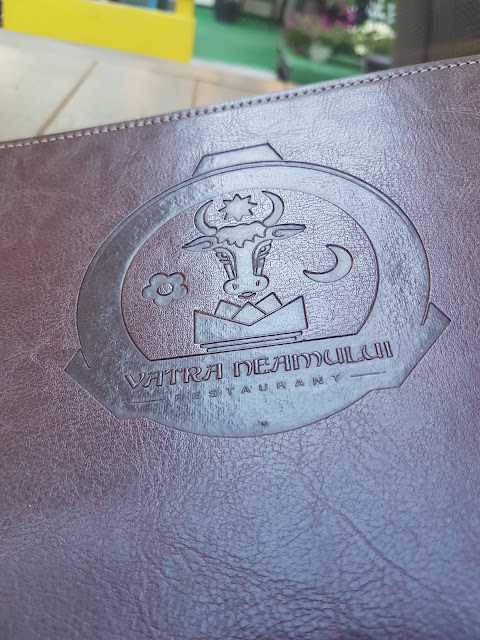 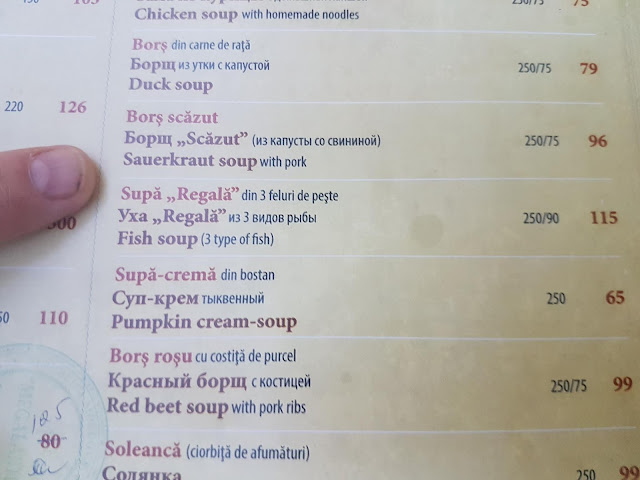 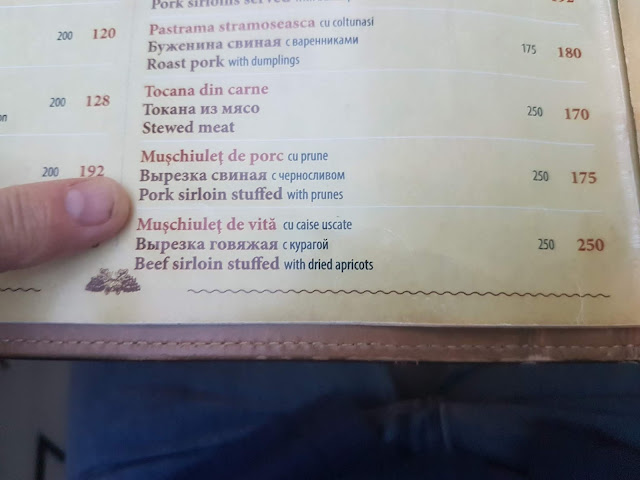 Cheers!! Enjoy life, while you can!

Then it was literally a 5 minute walk round the block to finally get some proper sleep. No early start tomorrow, so no need to set any alarm.

Ok, Boro, if you're reading this, see you later on today in Odessa!
Posted by Algis Kuliukas at 10:32 PM