Hello, Tblisi! (which is what the Georgian text above means.)


Blimey, is it June already? Three days gone and I'm already in my third country, Georgia. The flight from Baku was just an hour and it was pleasant enough as I had two seats to myself and my favoured window view. The only frustration was that as I was sat on the left hand side I didn't get a view of the Caucasus mountains.

On arrival, the first thing to do was get some cash having spent my loose Manat change on the plane for a cup of tea. The local currency in Georgia is the Lari.

The first thing you notice at Tblisi airport is the amazing Georgian script which is completely different from anything else. At least it's a phonetic alphabet, so once you've learnt a few letters it can start to be read.

I think it's really beautiful.

How do you say that?

My taxi pick up was a bit late but it was a nice smooth 25 minute ride.

I must admit, my heart sank a bit when we arrived.

This was my first impression of where I'm staying right now. 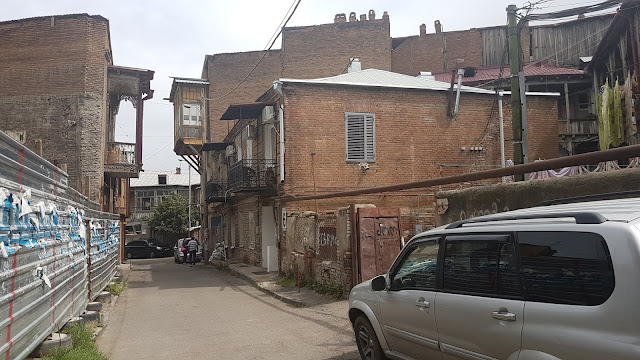 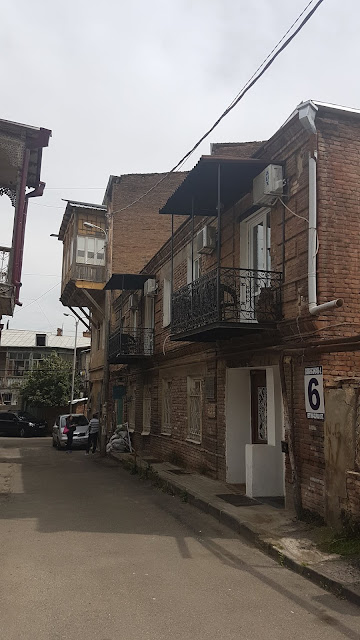 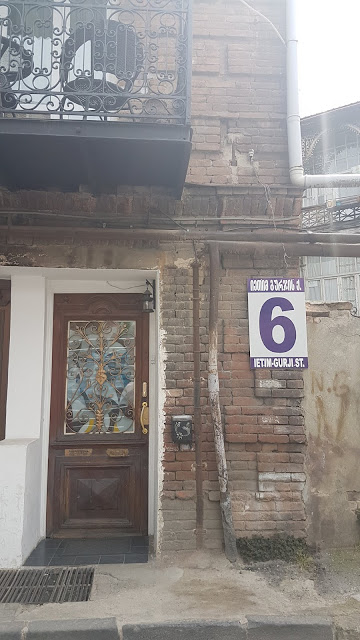 But once inside I could see that the owners had done a great job and the location couldn't be more central.

Anyway, having arrived and changed I set off to explore. My poor first impressions soon evaporated and I had a great afternoon and evening here.

Of all the places I wanted to visit, Georgia was top of my list. Obviously part of it is because of the fascination I've had with Dad's country, Lithuania, and the peculiar similarities of the recent history of the three Baltic States and the three transcaucasian states. There's also the bizarre fact that Joseph Stalin comes from here. I plan to visit his birthplace in Gori. There's a link, too, to my interests in human evolution. Homo georgicus was found in Dmanisi to the south and I was hoping to go to visit the site but I think I'll skip that. It's a long drive to just look at some hills. I definitely plan to see the fossil in the museum here though, just ten minutes walk away. Then there's Dinamo Tblisi the famous side of the Soviet era who knocked Liverpool out of the European Cup 1979, helping clear the path for Forest to win it a second time.

And then, there's the wine!

That would follow after a good old stroll around the city. 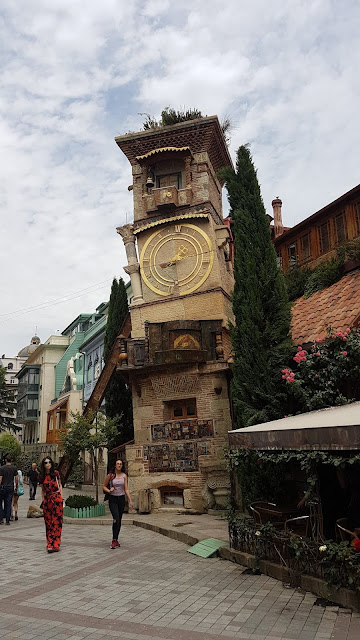 I had hoped to see some Georgian traditional dancing but the place that promised it didn't have any going on when I went there. Never mind, maybe tomorrow.

After several on-line recommendations I went to g-Vino on the same street I'd had lunch. The staff were really helpful and Leeka(?) the waitress who served me soon focused in on the type of Georgian wine I was most likely to like. Not the reds, they seem too sweet to me from what I've seen so far.

I really love the amber wines, especially those made with Rkhatsiteli grape.


I also had a brief encounter of the religious kind. Drawn to the haunting chants of an Orthodox priest at the ancient (5th century, apparently) Zion Church, I was curious so stepped inside.

The church was packed with solemn worshipers, many holding candles. They'd often sing back to the priest as he led. It was a very beautiful scene but I soon had a tap on my shoulder.

I shook my head.

He gestured that I should leave.

Oh well. I suppose I had no right to be there anyway. 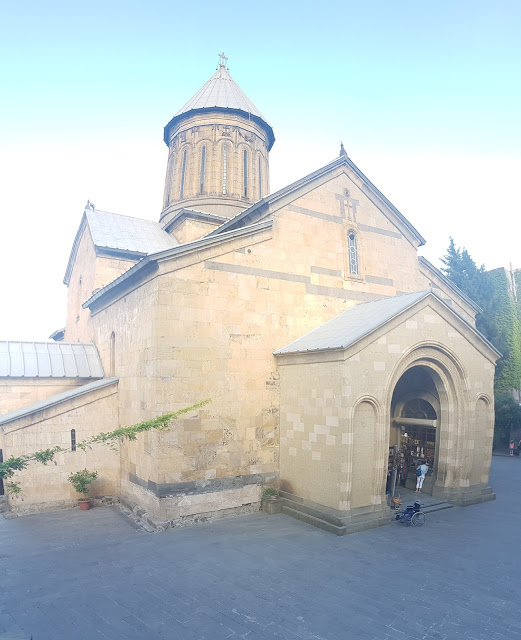 Then it was time for a spectacular cable car ride over the city up to the Nikarala fortress that overlooks the valley. 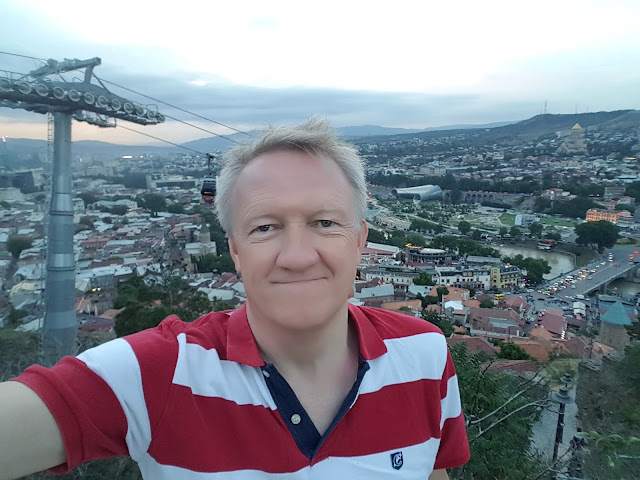 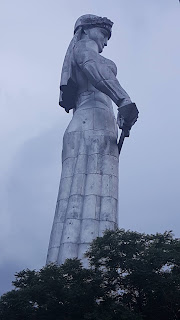 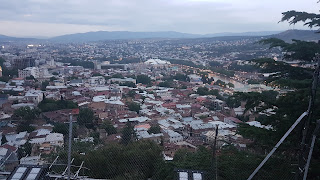 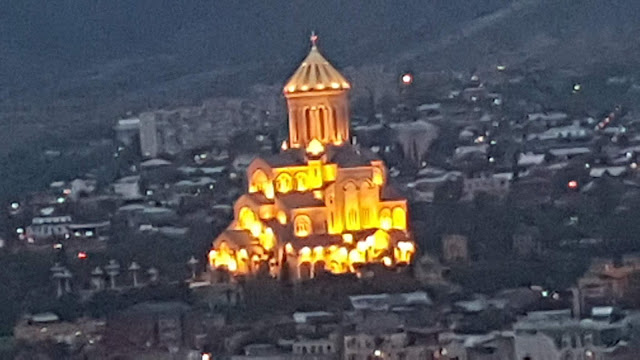 After coming back down, I strolled to another wine bar before having a very good night's sleep. 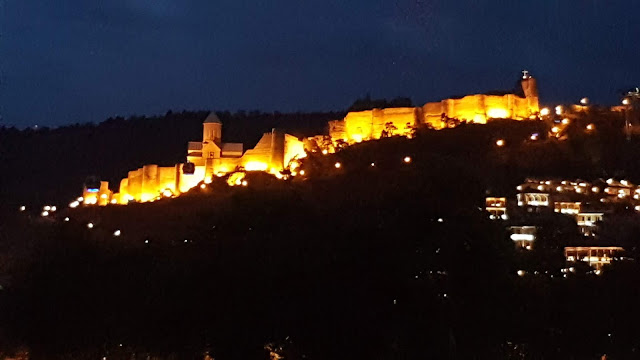 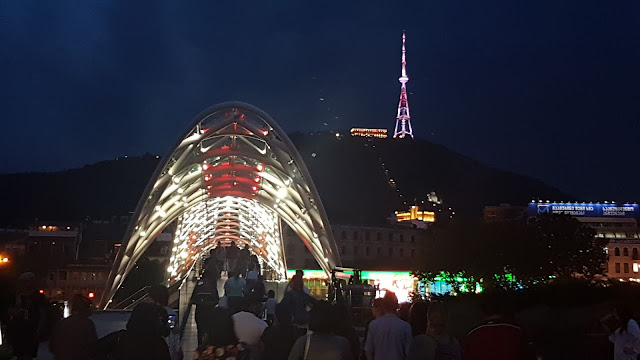 Posted by Algis Kuliukas at 9:38 PM