Like many cities on the tourist path, Istanbul is a bit mercenary. Walking through the streets you don't see many beggars (nowhere near as many as, say, in Perth, Australia), and the ones you do see seem to be mainly really old women. But you do get people coming up to you being over-the-top friendly. You soon realise that it's almost always the first gambit in a sales pitch though. So, you get a bit hardened to it and learn to be really quite rude to such people by simply ignoring their friendly overtones. You'd think after a while you would learn to deal with the guilt that comes with this and become a thick-skinned traveler.

I try to be hard-nosed like that but I can't help myself, every now and then, from being a big, stupid, mug. Today was one of those days, I'm afraid. I still feel sick inside about it. But there you go. Nowt I can do about it now, other than try to be more careful in future.

The day started Ok with a good breakfast on the rooftop. I got there nice and early this time and had as much as I could eat. While having breakfast, I was browsing on-line through my mobile phone. I have an app on my phone that can edit blog posts and I sometimes use it to tweak the odd word here and there. I noticed that the "Goodbye Georgia" blog was marked "Draft". That was odd. I hadn't edited it since I arrived here the day before. I opened the page to have a look and noticed it was a (very) early draft when I first started writing it whilst I was actually at Tblisi airport. Clearly I didn't want to "Update" the blog with that version, so I cancelled and quit the app.

Back in my room I checked the post and, to my horror, it had disappeared. To cut a long story short, it seems that the mobile app has a bug which overwrites or deletes a blog post if it is opened marked as "draft". I researched the web to see if it could be recovered and tried various lines of thought but it seems, alas, all that work has gone and I'm going have to do it all again. I know it's a first world problem but I can't help feeling really sick about it. I was quite proud of that one. It's like writing a really good assignment and then deleting it by mistake when you haven't got a backup.

Anyway, not a great start to the day, then.

Put it behind you and carry on.

I decided to take a look at the spice bazaar which is pretty interesting. I tasted a few of the spices on sale but obviously didn't buy any. However, I was gullible enough to be persuaded to buy some Turkish Delight. I don't even like the stuff (Fry's Turkish Delight - that is, and a few others available in England) but I read that here in Istanbul it's the best in the world. 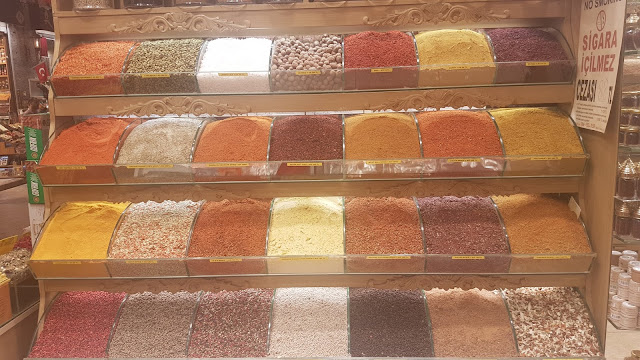 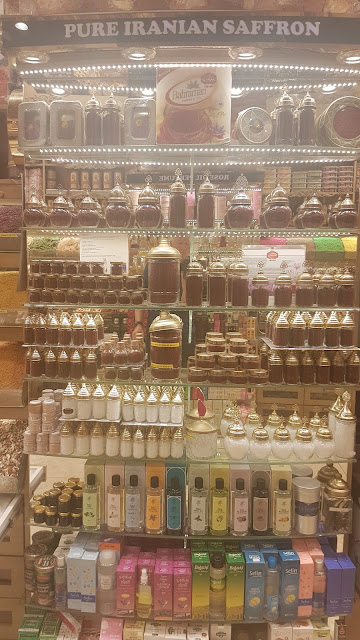 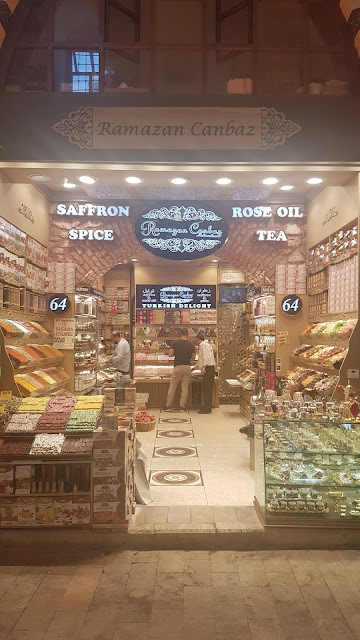 Mmm.. not all that impressed really. I'm not really into sweets. They just mean I have to brush my teeth again.

Anyway, after skyping Leb, it was time to go down for my Bosphorus trip.

I must admit it's something I've always wanted to do. I've always had a fascination for key geographical landmarks, like mountains, confluences of rivers and where rivers meet the sea. So it was always going to be on my list of things to do.

For millions of others too.

If you're a tourist mug and haven't done any research, you might get lured by one of these persuasive fellows into an expensive boat cruise that might cost you around 100 euros. There's no real limit to what you could pay as many of these cruises throw in Turkish Cuisine, entertainment like belly dancers and "free" drinks. The sky's the limit really.

Now on this score, I did do my research and decided to go for the "good guys" of the Istanbul ferry service, Şehir Hatları. They do a short cruise, which still does half of the Bosphorus, for 12 Turkish Lira - that's just about $3.50.

Having bought my ticket with an hour to kill, and feeling rather pleased with myself with getting such a good price on the boat trip and a bit cocky generally, I decided to go and eat in one of the restaurants along the Galata bridge. I'd seen a nice-looking fish restaurant there yesterday and I hadn't had any seafood yet, so that would be the way to go. The waiters were, of course, smooth, super-friendly and full of good advice as to what I should have and, "no problem, it will all be fresh" and "you only pay for what you eat, we weigh it for you". It all sounded wonderful and I was in a very good mood, but also in a hurry - not a good combination in these situations.

I must admit I let my guard drop and somehow, I was persuaded to have a lobster as a starter (which I thought would mean a smaller, cheaper, portion) well as some fish and a couple of glasses of wine. I have to say it was all delicious. As I told them I had to go to catch a ferry at 2:30. It was all served in time. No complaints so far. With ten minutes to go before the boat left I asked for the bill and, again, they delivered it in seconds.

I am too embarrassed to report what I was charged but suffice it to say, when I told Leb about it, she said "bread and water for a week then." I think that's just about right.

It seems it's a fairly standard scam that I fell for. Several single, smooth talking, men have come up to me around tourist sites and started getting friendly. It would seem that these may have been scammers too. "I am from Cyrpus. I do not know Istanbul. Maybe we could have a drink." etc

Anyway, feeling sick at my stupidity and full to the brim on (admittedly delicious) food, I headed for the ferry.

I was worried if I might get sea sick but the trip was very calm and very pleasant indeed.

Here are some pics... 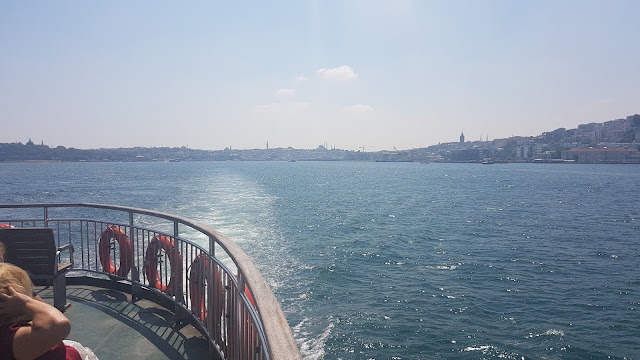 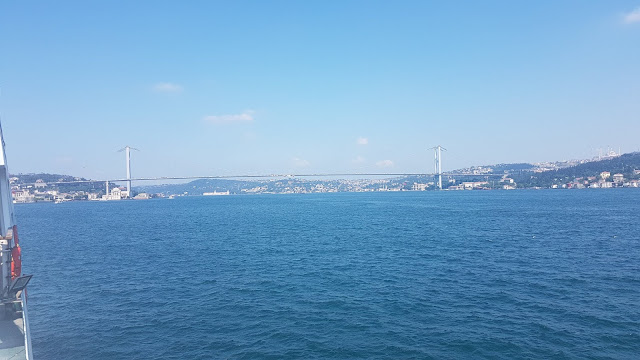 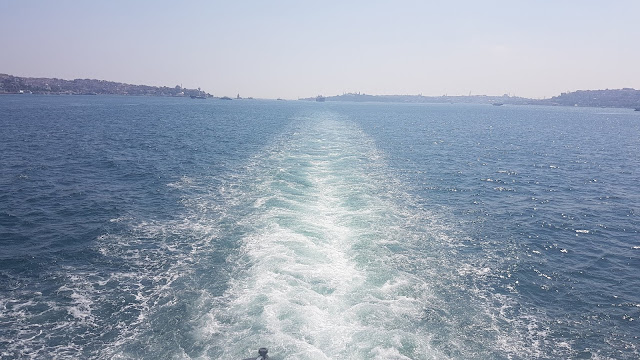 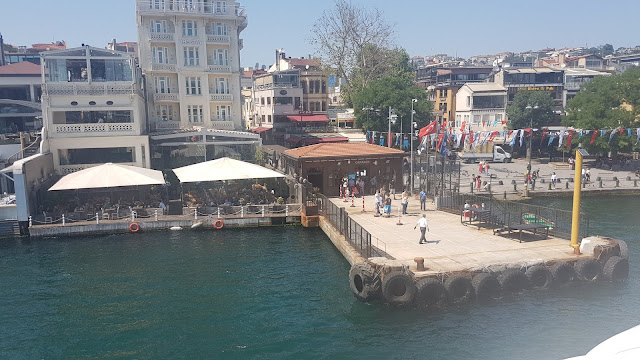 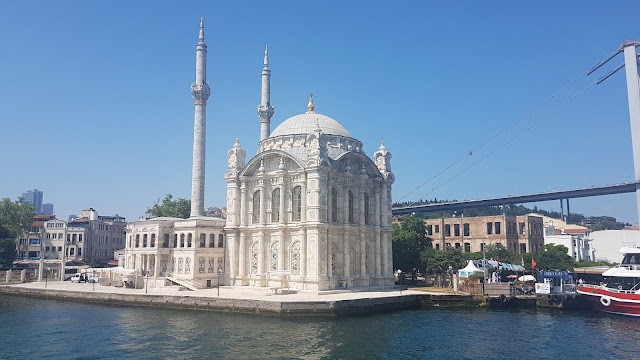 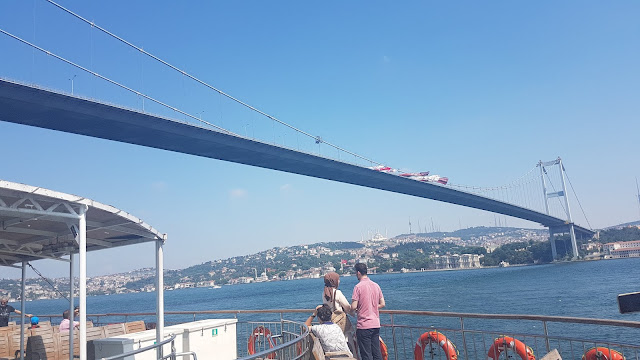 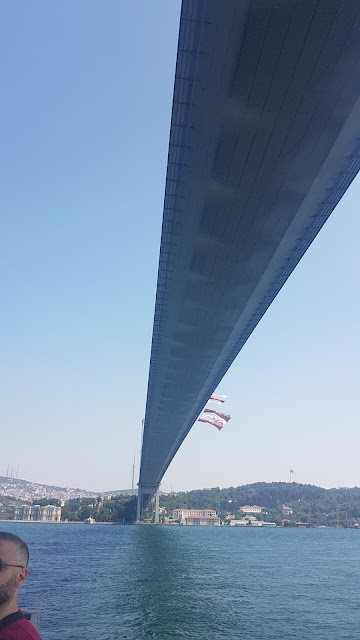 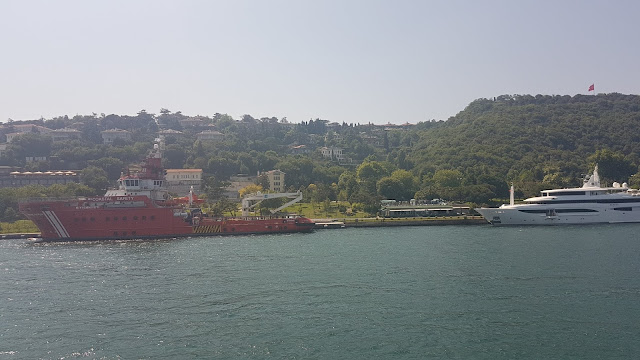 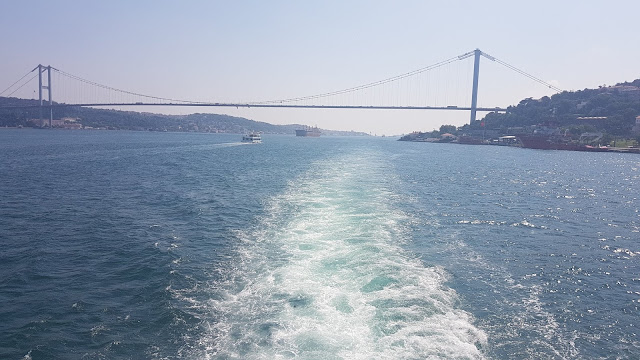 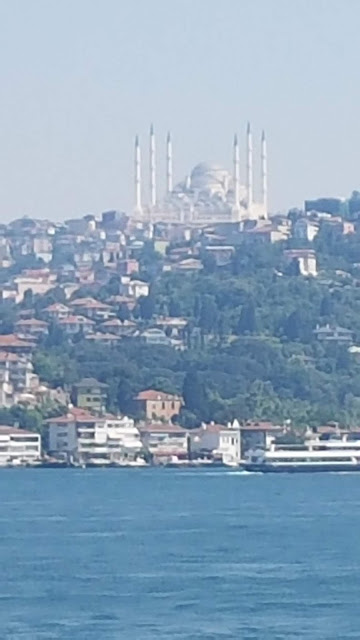 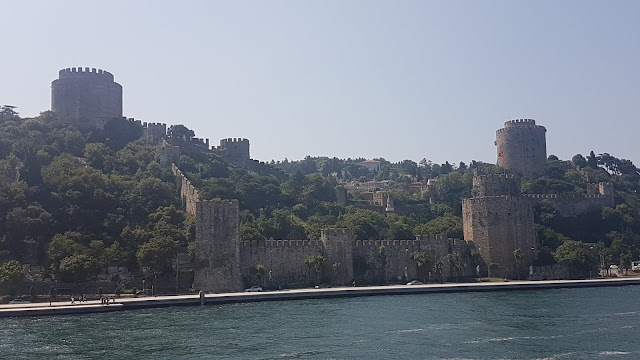 
The ferry stopped at two ports on the way there, and on the way back. It's quite amazing how such a huge boat is docked so quickly and safely.

After getting back on dry land I went back to the restaurant to tell them that as I'd had time to think about on the boat trip, I thought the bill was excessive and ask them how they could justify it. Basically they said lobster is expensive and they told me the price per gram, and that I'd agreed. They offered me a free beer (woo!) but I refused. I had the monk on because despite feeling I was tricked, I knew I really didn't have a leg to stand on. I had lobster in South Africa and it was really quite cheap - maybe I had that idea in my head somewhere. I do feel very foolish.

But I don't plan go to back to Yildizlar Restaurant again any time soon. 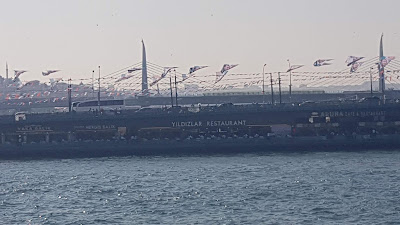 Anyway. That's about me done in Istanbul. Tomorrow morning I'm off to Bucharest.