Flying over the Persian Gulf and then Iran was quite magical for me. When you see Iran on a map you notice how hilly it is but when you fly over it, that relief becomes reality. 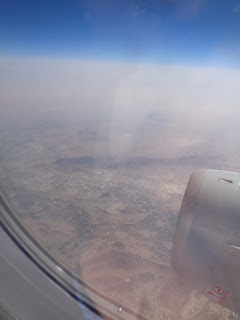 So, flight 2 was much more pleasant without any screaming infants and I arrived here in Baku in perfect time at around 10:30 am. The transit through passport control was very smooth and I exchanged some Aussie dollars for Manats.


After a slight moment of excitement when I was confronted by three eager taxi drivers on my way to the bus, I bought the ticket (quite expensive as it turned out at 20 Manat) and boarded the bus to the city center.

My glitch of the day was not to use the airport's Wifi to download a map of Baku on Maps.Me BEFORE leaving but I turned it into a bit of an adventure. Could I find my hotel using only bits of paper I'd printed off showing where it was, generally, in the city?

Anyway, it was easy enough and enjoyable. My first impressions of Baku were that it was much more European-looking than I had anticipated. Far fewer hijabs than I'd expected and, even though we were in Ramadan, there were plenty bars and cafes open, not that I sampled any.

Baku seems to have a curious mix of the ultra modern with some spectacular looking buildings, the Soviet era, and the ancient past.


After walking for an hour I figured I deserved a nice lunch so I stopped for a cup of local tea and some very tasty meat balls, "Baku style", which was a bit like a spicy shepherd's pie.


I got to the hotel and was greeted by very friendly staff who wanted to know if there was anything they could do for me.

"Well, yes, actually... I don't suppose you could get me a ticket for a football match that's going on tonight?"

What better way to start  my tour than to attend an international football match in a new city. A new ground and two new teams. How good is that? By the time I'd showered and got changed, I was offered two choices of ticket - standard for 1 manat (78 cents!) or "VIP" for 10 manat. I opted for the VIP treatment. Lucky I did, as you'll see.

Anyway before the match I went for a stroll around the old town and the Corniche (sea front). 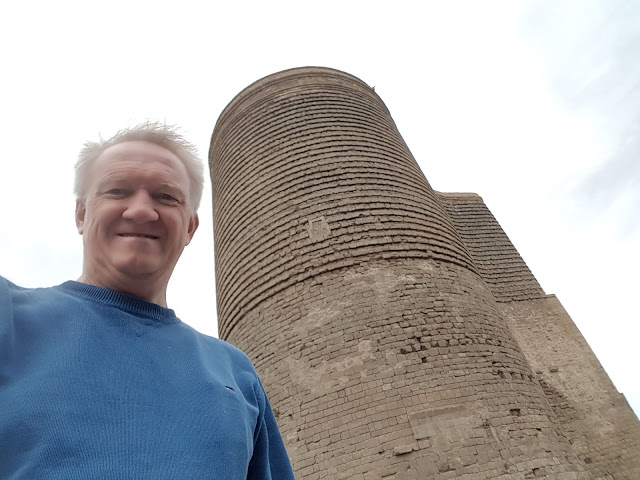 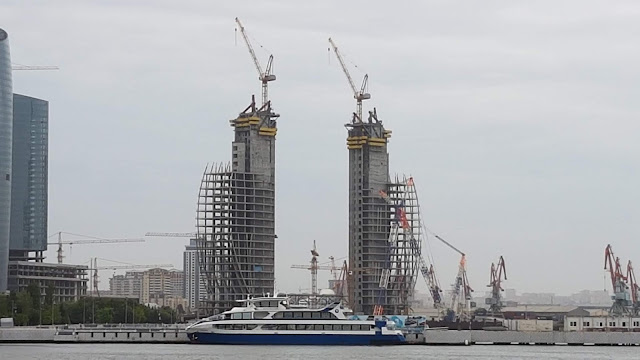 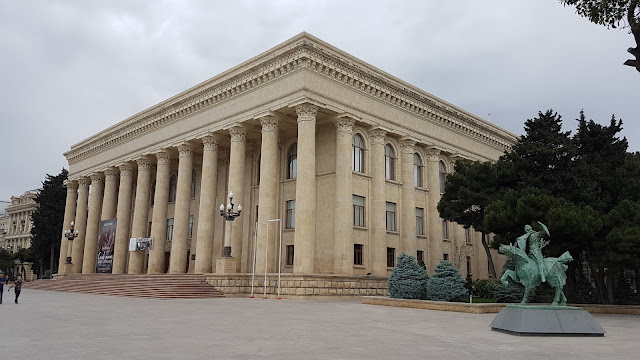 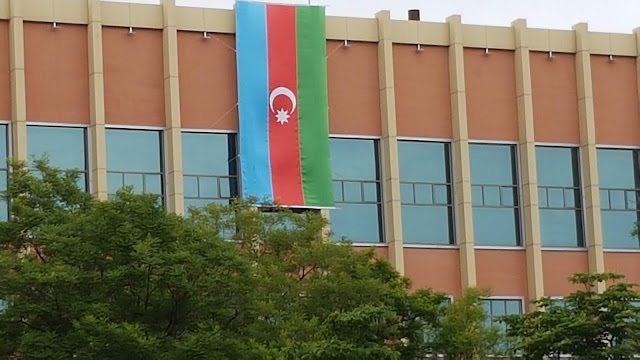 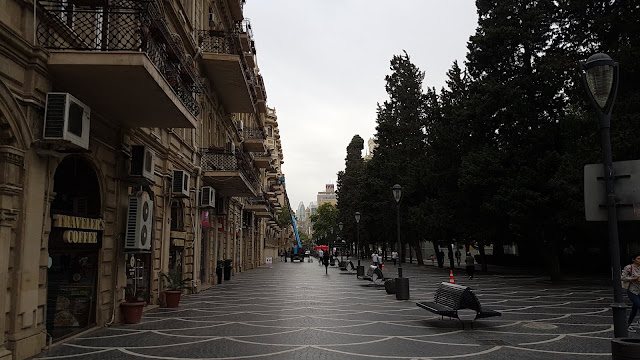 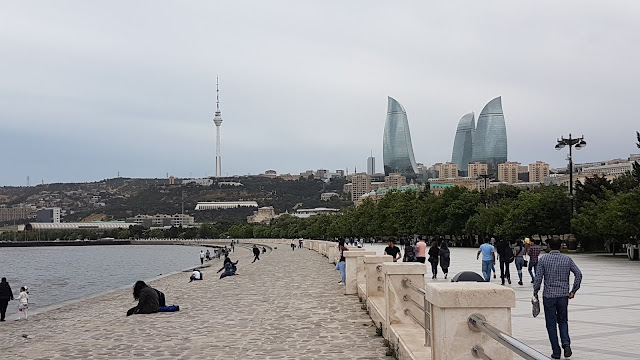 It was turning cold with the threat of rain so I popped back for my coat, Skyped me darlin, and then headed off to the big match!

The metro of Baku is not very complex - just two lines, I think, and there aren't many stops but it's very fast and very cheap. I caught the Red line at  Icharishahar and got off at Koroghliu. 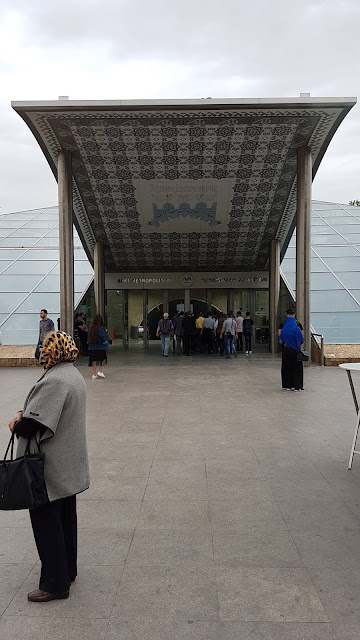 The walk at the far end looked a bit complicated, but when I came out of the station, the stadium was clearly visible and close by so I headed straight for it, only to discover that there was a bloody great motorway preventing me crossing. So, realising my mistake I went back and followed the now growing crowd of fans under the bridge to the stadium. 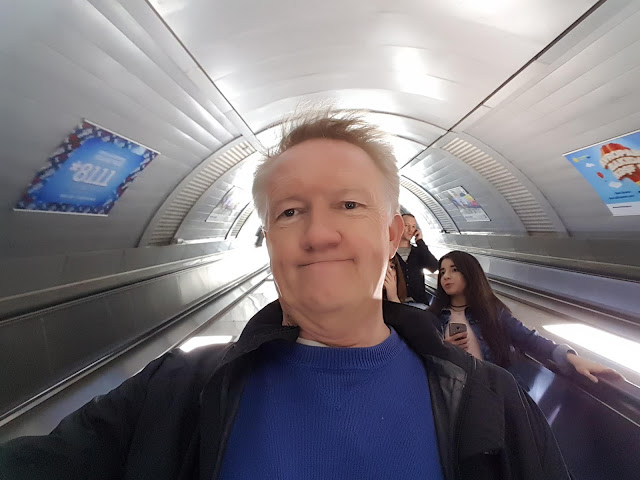 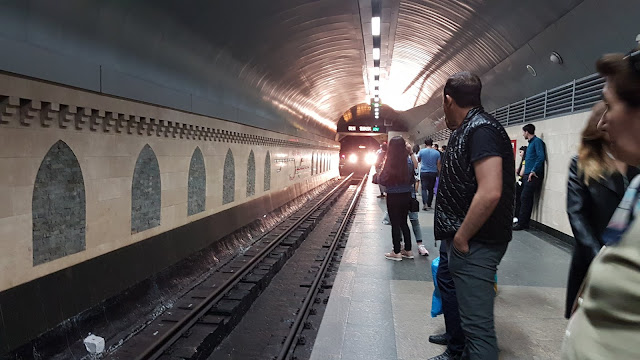 I got there a bit early but that was fine as it allowed time to sort out my ticket. The on-line purchase made at the hotel was just a voucher which I should have exchanged for a ticket but the detail got lost in the translation.

Soon I was sat in my "VIP" seat, where I like it, near the half way line. 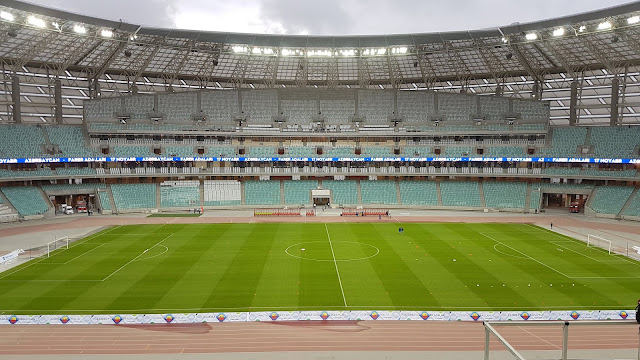 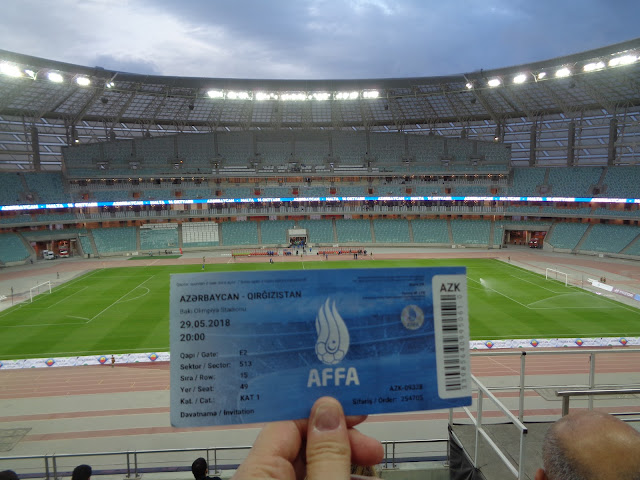 I was shown my seat individually by an attractive young Azeri girl and sat and soaked in "the atmosphere" in the, then, practically empty stadium. Just a couple of seats to my left, I couldn't help noticing that three young chaps were talking in English and after a few moments my curiosity got the better of me and I asked them why they were here.

Turns out, great minds think alike, and these were football mad friends from East Anglia doing a tour of Transcaucasia. They'd already been to Tblisi and Yerevan so were nearing the end of their trip, whilst mine was just beginning. It's always impressive and somehow confirming a higher morality when you discover that like-minded people like these were not the usual Man U/Man C/Liverpool fans. Two supported Cambridge United and one was a Norwich City fan. I know you do get fans of the big clubs doing thing like this - the Chelsea supporter I met in Donetsk was proof of that - but it's never a surprise to keep finding that football fans who do not support one of the oligarchs are always over represented in situations such as this.


So, there I was, sat in a near empty stadium, about to watch a friendly international (something I usually hate) between Azerbaijan and Kyrgystan, talking to two Cambridge United fans about the bizarre tactical methods of John Beck and the boycotting of the EFL trophy due to greediership teams wanting to play their B teams. (Poor things, they recruit squads of 50 plus players and then don't know what to do with them all so they try to get the rules of football changed so that all the other clubs have to act as practice teams for them.)

We also discussed the new UEFA Nations league as there were many ads being displayed about it on the flash electronic billboards around the stadium. We unanimously agreed it's a great idea. Azerbaijan had struggled in their World Cup qualifying group and never had much hope of qualifying so this sort of tournament gives teams such as them something tangible ti aim for. 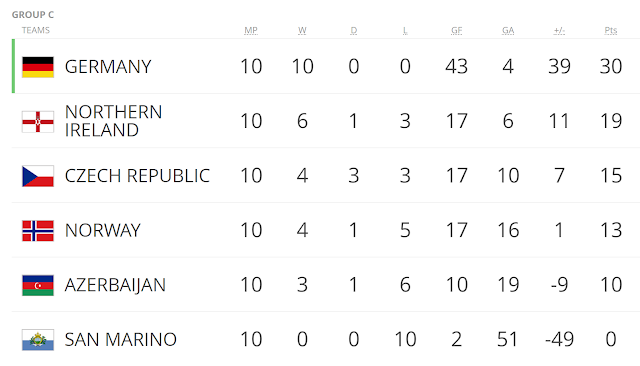 The idea is to organise a series of groups with countries that match their ambitions in a league like structure (labelled A to D) with promotion and relegation between them and one or two places for lower league winners in the finals of the European Championships.

Azerbaijan will be playing the likes of Kosovo and Malta on League D. Lithuania made it into League C. 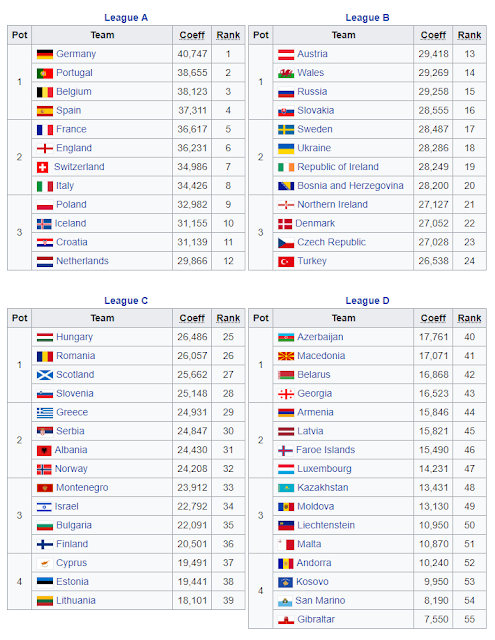 It has to be better than just going by FIFA rankings although, for Kyrgystan, being in the Asian zone, they will not have that privilege.

Kyrgystan, in fact, played in Australia's World Cup Qualifying group in Round 2, a fact I'd forgotten until I just looked it up. 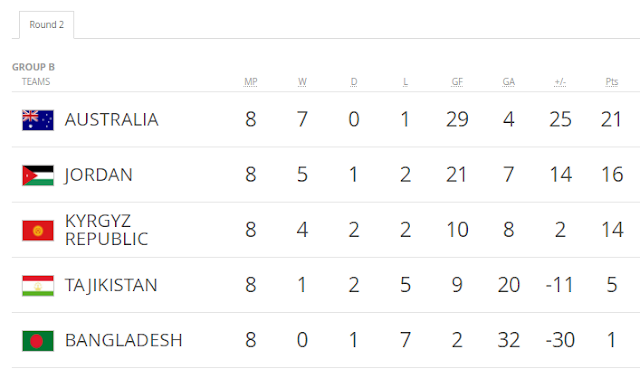 The "Caltex Socceroos" did the double over them, winning 2-1 in Bishlek and 3-0 in Canberra. 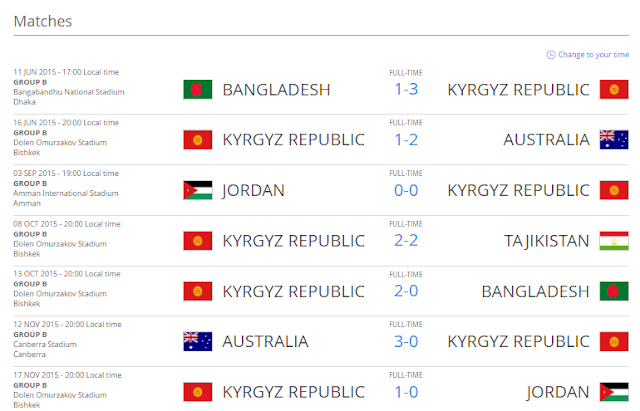 It surprised me to learn from my fellow travelers that Kyrgys Republic were ranked over 50 places higher than Azerbaijan in the latest rankings (and also that the capital of Kyrgystan was Bishlek - damn! I'm supposed to know all this stuff about ex-Soviet republics!).

Anyway, as the match would prove, the ranking is clearly distorted by Kyrgys getting points for beating predominantly Asian teams, that must be weaker overall.

The atmosphere built up quite nicely and the game was pretty good really. 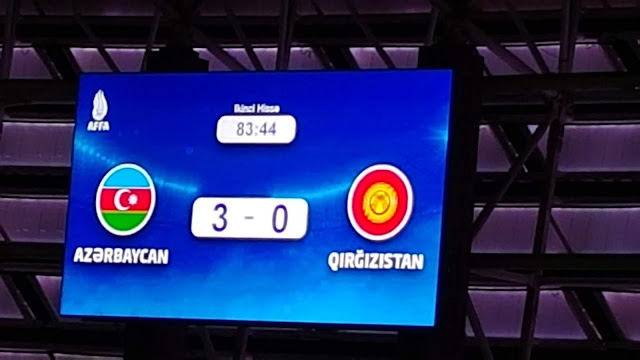 On the play tonight, the Azeris looked really pretty good and won comfortably by 3-0.


The stadium looked even more spectacular in the dark...