My first (and second) flights were with Qatar airlines who, I must say, I always find to be excellent. And as a bonus it meant a stop off at another country: Qatar, of course.

The flight over was pretty good apart from one thing... screeching babies crying blue murder almost non stop. From the moment the doors closed at Perth to the moment they opened in Doha there couldn't have been more than an hour when the cabin didn't seem like a maternity unit.

As a father of four I know how tough it is and I do feel very sorry for the parents. But surely there must be a way of having a sound-proof cabin for the screeching little souls to be placed in. It can't be right that hundreds of people have their flight ruined because of four or five babies.


The food was great and although I didn't fancy any of the films I did manage to get some good studying and reading done as well as keep an eye on our progress across the globe. I love these modern flight map systems.


So, it was a two hour stop in Doha before I was on my way again, catching the next flight to Baku. Just long enough to get off the plane, go through security again, find the gate and wait for the boarding call.

So Qatar was country No 1 on this tour, it was my third visit to the country - each one transitory like this one.

In fact, it puts Qatar into the top 20 of countries visited, at No 17 no less - but notice that of all the top twenty I've spent by far the least time there. 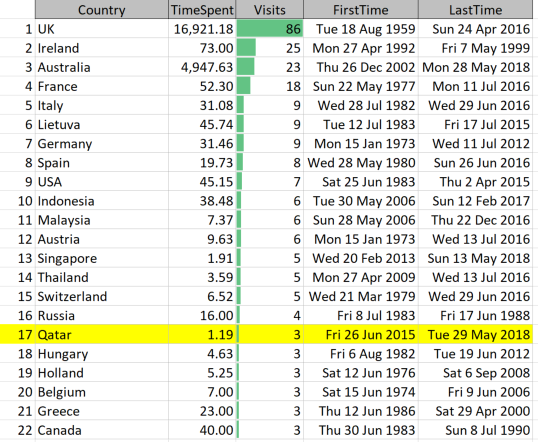 So, as it's a World Cup blog, I have to finish with a few facts about Qatar's World Cup bid.

They didn't qualify and in fact came last in the opposite group to Australia, in Round 3.

Still they did well in the earlier round, topping their group.

Ironically, the next world cup is due to be held in Qatar in 2022. Don't ask. Apparently seven purpose built stadia are being constructed for the tournament. This, remember, in a country of just over 2.5 million people. Even Lithuania is more populous - but of course, nowhere near as rich.

The main (Lusail) stadium is well under way, apparently. A fellow Irish dancer told us that it was ahead of schedule. She said it would not have a covering roof but it would be air conditioned and had under soil COOLING.

Oh well, I'm off now to explore Baku (and go to a match here!) I'll do that write up tomorrow.