Cristiano Ronaldo lined up to take the free kick. The cameras of the World zoomed in on his face. There was no question about the intensity of his concentration. Portugal were 2-3 down with time ticking off the clock. This could be crucial. It was well within range but in between the ball and the goal was a wall of defenders and the acrobatic and highly agile David de Gea. Would he score?

“He’ll balloon it over the bar!” grumbled Boro, not a Ronaldo fan. Too many vital goals against Middlesbrough when he played for Manchester United. All fans of rival climbs have suffered from that and most would express a dislike of the man. Just a bit too vain and a bit too weird for most people’s liking. 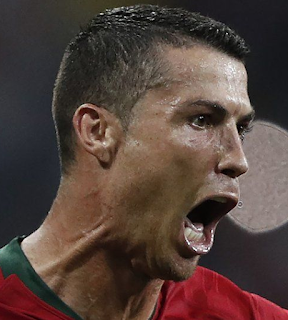 As with every destination so far, my time in Odessa ended too quickly - this time after an exciting climax after watching a fantastic match between the two heavyweights Portugal and Spain in a bar with my football guru mate from decades ago..

The last day here started in a very relaxed manner with another great brekkie and a couple of hours writing up my blog post. As the internet speed was pretty good I also logged into a couple of my customers' systems in Perth to investigate two problems they'd been having. I still can't quite believe how that's possible. Here in Ukraine, I press a key on my Surface Pro, and a PC on the either side of the world responds within a second.

Anyway apart from a bit of software support duty I had a lazy morning and had a bit of a snooze.

My main objective for the day was to find a bar that was showing a World Cup match (practically all of them are) buy a beer or two and sit and watch the game and then repeat the process twice more. It wasn’t exactly going to be difficult.

Just to throw a spanner in the works, though - otherwise it would literally be "too easy", right? - I got a text from Boro saying he'd lost his phone the night before and would be going back to the restaurant to check if anyone had found it.

After breakfasting and blogging I was ready to meet Boro at the pub we’d agreed on. I couldn’t quite remember what it was called though, was it called Corvin? I texted him but, perhaps not surprisingly, got no reply.

After a bit of searching the maps I decided I’d go to that pub anyway as it was getting close to 3pm.
I texted Boro...

“Going to  Corvin. Hope to see you there."

I trotted across the ten minutes of so walk it was from my room. 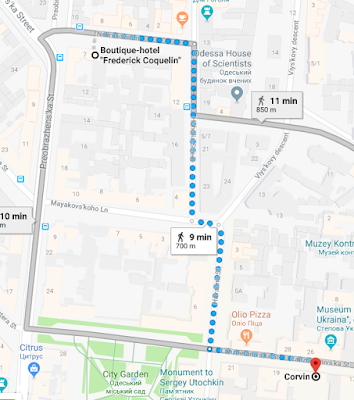 The pub had a bit of a Scottish theme going on and the two (rather brutal-looking) barmen both wore silly leather kilts which made me wonder what kind of place it was for a minute.

I ordered a pint of t'local lager and waited for Boro to show up. Clearly things were not going well regarding the lost phone and so it must have put a bit a downer on the day for him.


The match hardly livened things up and Egypt, without their superstar Mo Salah, were probably thinking that a draw with Uruguay would be a good result and so were not very adventurous. Uruguay never are so it made for a really dull game.

Uruguay nicked the game in the last minute with a 90th minute header to steal the points and confirm the consensus in Group A that it will be Russia and Uruguay that will go through. We missed the goal as Boro was regaling me with one of his heroic tales!

After that, Boro went off to do further investigations on the phone front, while I headed back to the hotel to grab a bottle of wine I'd brought from Moldova.

The next place we met was the Morgan Club, for Iran v Morocco, the first game of Group B.

I had a nice glass of Georgian amber wine - a lucky discovery I'd had a few weeks before - and some nice pancakes.


Unfortunately the football fare was not to the same standard and Iran and Morocco seemed to be playing out a dull 0-0 draw.

I say "seemed" because with five minutes of the game to go, the bar staff decided enough was enough and they switched the match off and the disco music back on. We were in no mood to complain, as it was a really poor match, and went off to Kristina & Boro's place to open a bottle of red.

They have a compact little flat in an ideal location right in the center of Odessa, easy walking distance to the beach and all the main places you'd want to go. After a nice glass of Moldovan red, we set off back to Mick O'Neill's for the big match of the day... Spain v Portugal. Boro and I set off to get a good table and the ladies would follow soon. Hopefully, it would not be another dour stalemate.... please!

When we got there we met some other guys from England (Hull) working as teachers in Odessa and they kindly let us sit at their table with a great view of the big screen. They also informed us that Iran had got a last minute winner against Morocco to seal the match.

Unfortunately, when Kristina and Victoria arrived there were no spaces left on the table so we moved upstairs to find a table for all of us. Not such a good view but as Boro said, better to have a crap view of a good match than a good view of a crap one.


And what a match it turned out to be. Portugal took the lead early on with a penalty from Cristiano Ronaldo, after he'd been brought down. Spain equalised with a brilliant goal from Diego Costa, showing that he's more than just a dirty con artist. It all looked as if Spain were getting on top until just before half time when that man, Ronaldo, scored again - this time only because of a terrible mistake by David de Gea, letting a soft shot go through his hands.

In the second half, Spain came back quickly with two goals in three minutes. They equalised with another, more characteristic goal from Costa, before Nacho scored a stunning goal that hit both posts before settling in the back of the net. It looked all over for Portugal until Ronaldo stepped up to take the free kick with just two minutes left on the clock.

Boro, as I mentioned earlier, was not very confident that he'd score but, as this player has so often done, consistently at the very highest level, he delivered a screamer into the top of the goal. How he managed to get the ball to rise up and dip over the wall defies the laws of physics.

After concluding his hat trick and saving Portugal from defeat, Boro had to concede of course that Ronaldo was a brilliant player. Boro, to be fair, has always known that and is certainly not a typical xenophobic England fan who does not appreciate his skills. But like many fans, he remains on the Messi side of the "who's the best player in the world" divide.

The result leaves Group B in a bit of a flux, with Iran in pole position.

It was time for me to say goodbye. I had to get up ridiculously early to catch a 7:20 am flight to Minsk, with a change of flight in Kiyv. 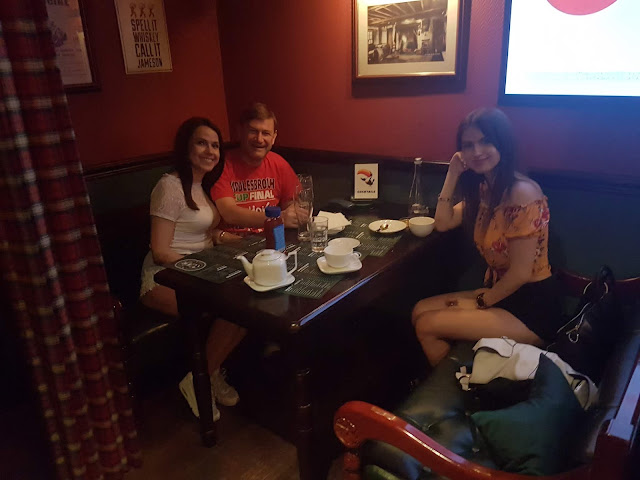 Большое спасибо!
Posted by Algis Kuliukas at 2:46 AM