Journey to the Center of Europe

My first full day of four in Lithuania, and 21st of the tour (40% complete) began with me frantically trying to catch up with my blog posts. I only had a couple of hours before I'd arranged spend some time with one of my Lithuanian relatives, Rasa. The other big thing on the agenda today was England's opening match against Tunisia, in which England overcame stubborn resistance, some very dodgy referring decisions and a lot of bad luck to win 2-1.

I met Rasa and we had a coffee and a nice chat before she drove me back to her lovely house in a village on the outskirts of Vilnius.

Rasa is the daughter of my cousin, Vida. Vida's mother, Apemija, was my dad's sister. So, Rasa and me share the same grand parents, only for her, they're her great grandparents.


Rasa is a real star. After independence she went to Sweden to work and save up as much as she could to invest in her dream to buy a restaurant. It's people like her that have pulled Lithuania up back onto its feet after fifty years of Soviet rule.

As we arrived at her house she said.

I started to panic. I don't really like dogs at the best of times. Ever since one bit me under my eye when I bent down to pat one in half moon wood, in Kirkby when I was 10 years old. The thought of a big dog heading straight for my goolies really does not appeal.

As she opened the door and walked across to the dog, I got the joke.

Even I couldn't help but find the little puppy (four months old) irresistible.

One of the things I wanted to do on this trip was to visit the Geographic center of Europe which, it is claimed by many, is in Lithuania, close to Vilnius.

People always think of countries like Poland and the Czech Republic as being in "Eastern Europe" but technically, they are in the West. It is often forgotten just how big Russia is and how much of it is in Europe - up to the Urals, remember.

It's very complicated and controversial, of course. Do you count Iceland, if so, how? And where do you draw the line in Turkey? Is Azerbaijan in Europe? Is Kazhakstan? etc. Not surprisingly there are many claims, some in Poland, some in Belarus, some in Ukraine. Of course, Lithuanians claim it's here, so I wanted to go there myself.

The Europe Park is big open area of woodland which is used as an outdoor exhibition center for large works of art.

Not quite my cup of tea but it was nice to go for a walk in the woods anyway. 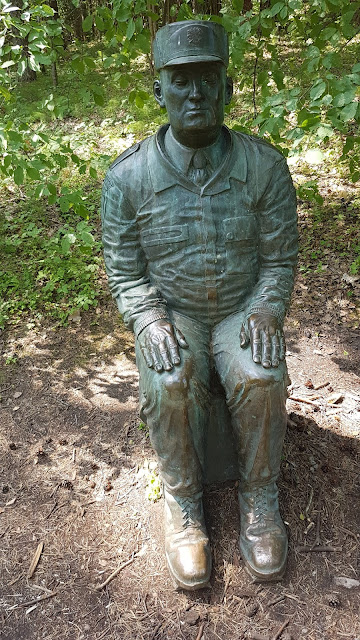 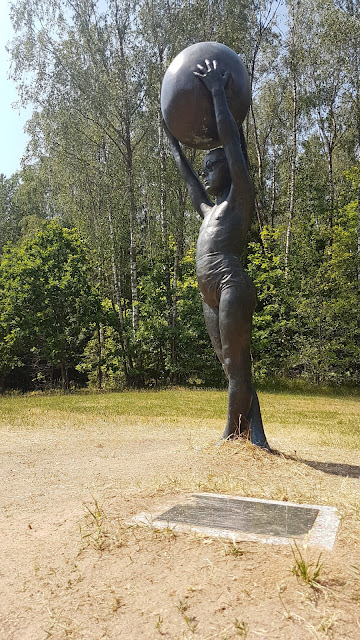 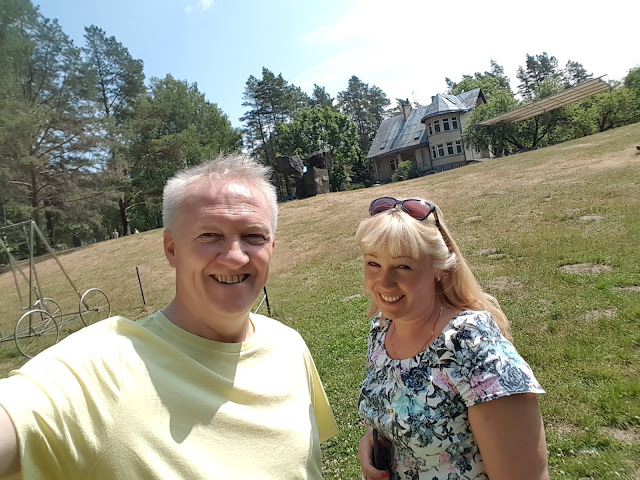 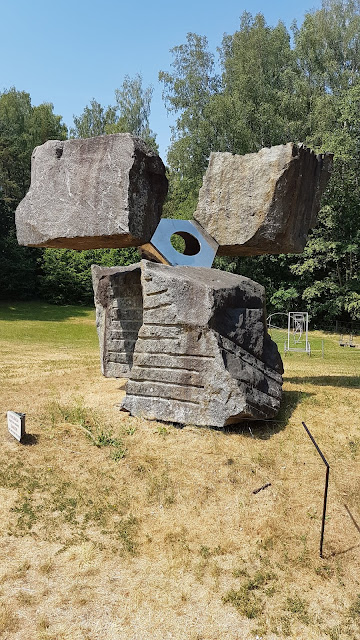 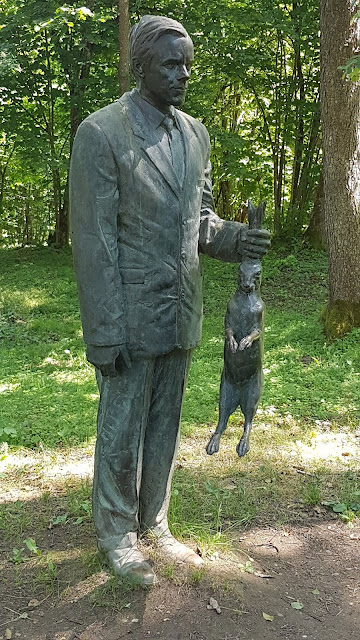 After that, Rasa drove me to her restaurant just 200 meters from my hotel on Gedimino Prospectas.


I had a lovely bowl of cold beetroot soup (šaltibarščiai) and a very nice salad. After days of eating rich, delicious stodge, my liver was calling out for something healthy.


Rasa had two of her friends over from New York. They had met years ago in Kaunas and had emigrated to the US about the same time we went to Australia. Such a lovely intelligent couple.


Rasa has two Radharane vegetarian restaurants in Vilnius. In a city renowned for it's hearty and highly calorific cuisine, she very wisely got into the healthy vegetarian food market before it became trendy. 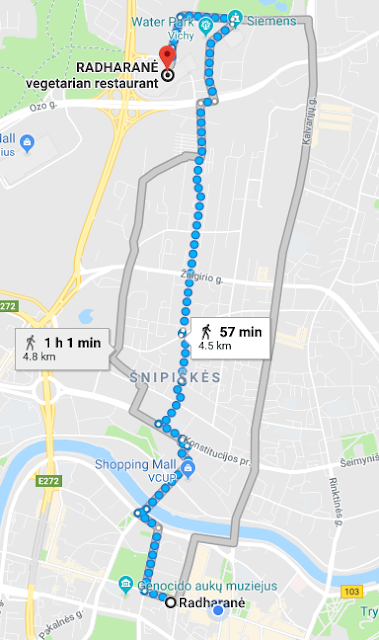 After a great but all to short conversation with Rasa and her friends, I looked at my watch and noticed I had only 15 minutes before the next match.

So, a little sheepishly, I said my goodbyes and headed for the nearest bar that would be showing the football. I ended up in one on my own watching Sweden v South Korea. I wrote yesterdays blog as I watched it. It was a very dull match and this was pretty much the only moment of note...

I finished the blog post off back here at the hotel and so for the next match I again struggled to get to  a bar in time. I always try to go to traditional, local pubs but on this occasion time was running out so I went in the closest, but hardly the most traditional - Hooters!


The bar maids were, of course, very attractive and the beer wasn't bad either.

I quickly found myself chatting with a bunch of Polish guys who were on their way to Moscow to watch Poland v Senegal tomorrow. They were clearly having a great time knocking back the beers and having a good laugh. They'd occasionally break into one of their Polish chants.

All five of them lived in England, in Lytham St Anne's near Blackpool. 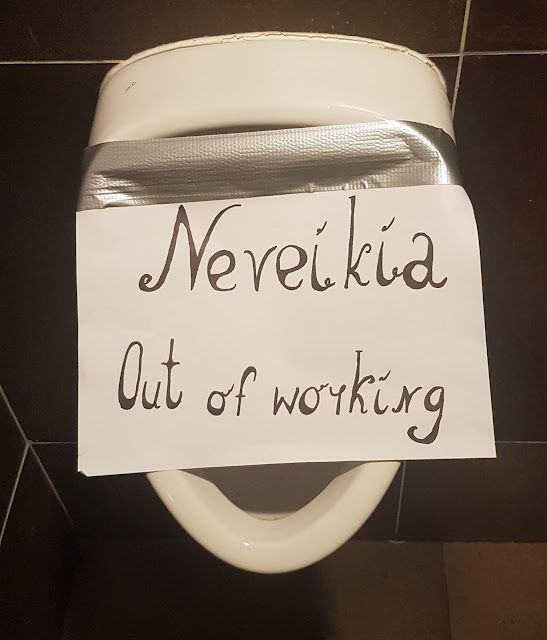 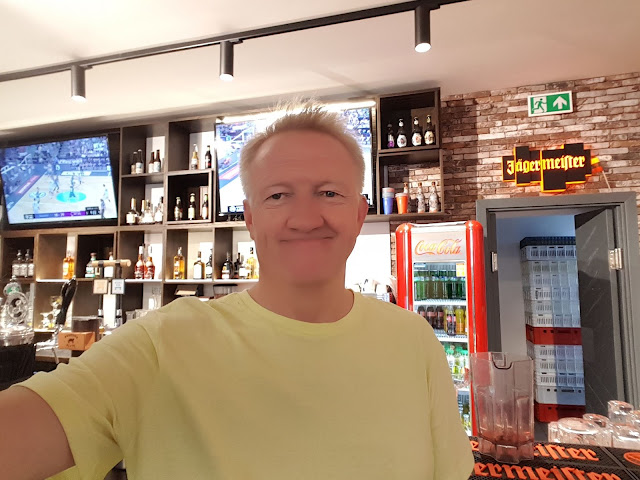 After a quick visit back to the hotel I set off for the big one - England v Tunisia.


England started really well and could easily have been 2-0 up in the first few minutes. But it all seemed to be going their way when in the 11th minute Harry Kane grabbed England's first goal in this World Cup. Typical goal poacher's goal, being in the right place at the right time and cooling slotting it in.

They continued to look sharp and really, the only aspect they seemed to be lacking is in the clinical finishing department as chance after chance went begging.

Then, with pretty much their first threatening attack, Tunisia lobbed in an innocuous looking cross and Kyle Walker was adjudged to have clattered their striker with his left arm and the referee pointed to the penalty spot. So Tunisia equalised. I was furious at the time but fury turned to frustration as England continued to dominate, Lingaard hitting the post and a decent appeal for a penalty for a foul on Kane turned down.

As the second half wore on, England seemed to have run out of ideas and it looked like we were in for the usual cocktail of bad luck, bad refereeing decisions turning into frustration. England had eight shots on target, to Tunisia's 1 but just couldn't score. It looked like another grim start to a major competition until that man Harry Kane, again, got the winner right at the death. 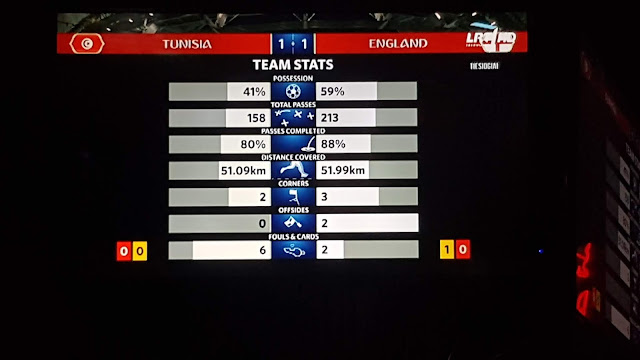 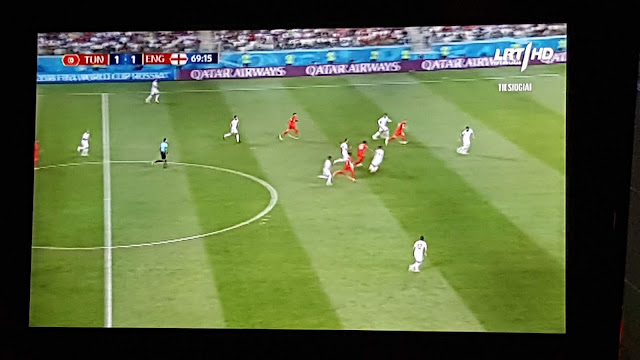 At the end I was chatting to a chap from England who was told me he also had Lithuanian ancestry. His was a bit more "royal" than mine though. He was the grandson of the late Stasys Bačkis, who had been the attache to the Lithuanian embassy as the war started. He continued in a semi-official role there for the over 50 years as the British government continued to deny de jure recognition of the Soviet occupation of the Baltic States. He died at the age of 93 in 1999.


So, as we close in on the first round of games completed, these are the two next groups where both teams have played.

Group F has a very odd look about it.

Tomorrow Group H starts and then we flip back round to Group A and Russia's second game against Egypt.
Posted by Algis Kuliukas at 12:57 AM