The one big thing I had to tick off today (other than making sure my flight to Yerevan was ok) was to visit the impressive Dinamo Tblisi stadium. It's a World Cup Blog - what did you expect?

Before that, though, I had to deal with an awkward last minute change to tomorrow's flight schedule and try to get a few other things ticked off too. It didn't help that it was a dull, rainy, dreary day. It was so cold and grim, it reminded me of England.

Breakfast was much better today despite nursing a hang over from last night thanks guys!) I say "breakfast" - more like a lunch. A very nice beef soup.


Whilst having my tea and soup and connected to the internet through their WiFi I received an alarming e-mail... 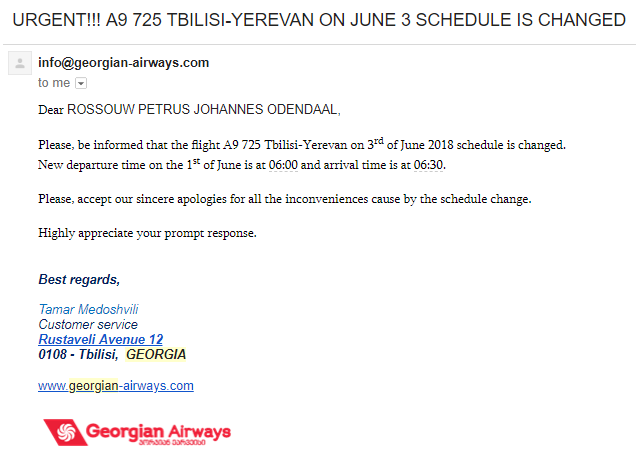 It wasn't addressed to me and it suggested that the flight had been changed to 1st June - yesterday! Eek! Within minutes I got a corrected e-mail directed to me saying that the date hadn't changed, just the departure time. This could be awkward. It was always going to be an early flight anyway but now it made me wonder what time I'd have to get to the airport and how much would a taxi charge to make a pick up in the middle of the night.

My reply to the e-mail bounced and I'd also tried to check-in on line and that failed too. Problems. Problems.

Google told me where the offices of Georgian Airlines were - just 15 minutes walk away - but that they were closed. I figured that as I was getting e-mails maybe someone was there so I set off to try to sort it out.

I got there soon enough but the security guard there told me they were closed (in Russian) and so that was that. Next idea was to go to a travel agent and see if they could call them. But Maps.Me only listed three in Tblisi and they were miles away. I asked a young group (most likely to speak English) and I was directed to a place she knew. But it turned out that place had closed or moved or something. So I decided to go back to the "hotel" and do some on-line inquiries.

When I got back I read an email from Georgian Airways telling me that I just needed to get to the airport by 4 am. Fine, so it meant that I really couldn't stay in my room for the third night but, instead, had to go to the airport in the middle of the night. Fine. Murphy's Law. Then, I got another e-mail from the company I'd booked through with the eTicket number so I could check-in on line.

Phew. At least it was just about sorted. I knew I just had to get to the airport in the middle of the night, so I could set off in the rain to do a bit more Tblisi exploring. 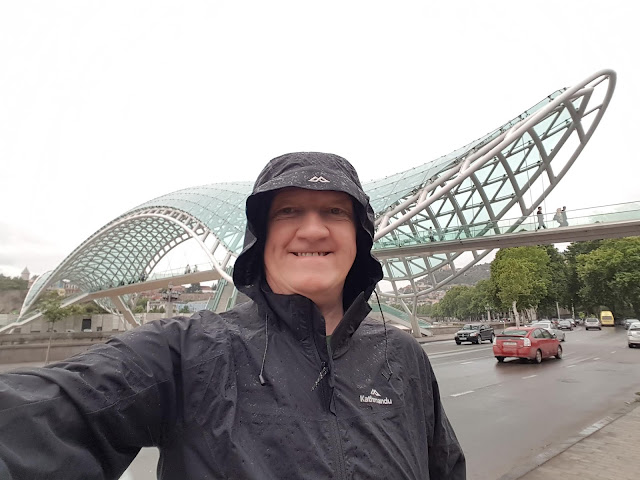 I crossed the river at the Bridge of Peace only to discover that someone had not been very peaceful with the chess pieces over there.

There's also a most unlikely monument to Ronald Reagan... 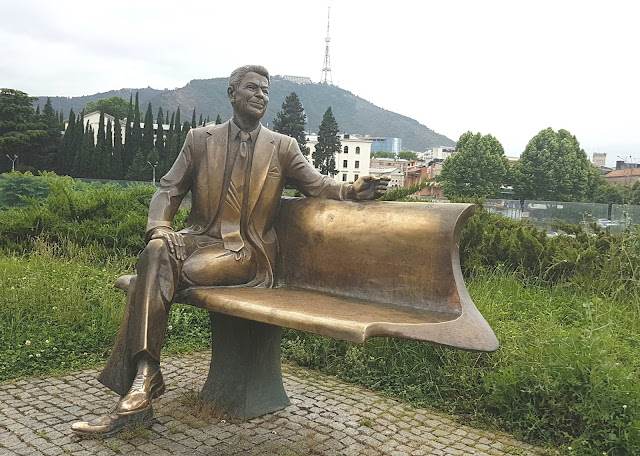 I was still hoping for a boat ride up the river to the Dinamo Tblisi ground at this stage but when I asked a boat owner he said I should get a cab, which I did.

The driver reminded me of Sepp Blatter. When I suggested the fare might be 5 Lari he laughed.

I wasn't in a position to argue and, to be fair, the traffic was bad.

Anyway, he got me there.

So what's the big deal about Dinamo Tblisi?

Well, they were always one of the iconic sides in the old Soviet league and the CCCP  team that took part in internationals seemed to always have one or two of their players. My first exposure to the fact that Georgia existed and people there had odd-sounding names was when I bought my Mexico 1970 football sticker book.

Revas Dzodzuashvili was their right back. What a name. It's one of the few I remember, even today from that World Cup. 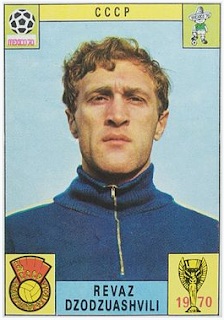 Here's a clip of that team in action.

They won the Soviet league for a second time in 1978, the same season my team Nottingham Forest won the English league for the only time in their 153 year history.

This win qualified them for the European Cup the next season, along with English champions,  Liverpool, and Forest who had won the competition the previous season.

Dinamo drew Liverpool in the first round. Liverpool won the first leg 2-1 but they were in for a shock when they came to Tblisi for the second leg. Tblisi stunned the reds with a 3-0 win.

Hamburg beat them in the next round though, ending their dream of European silverware.


These arches at the stadium must have been around in those days. 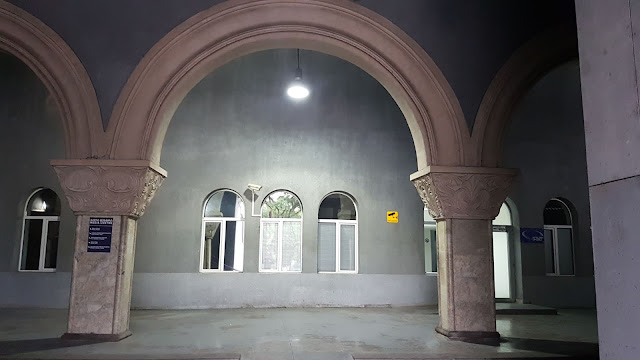 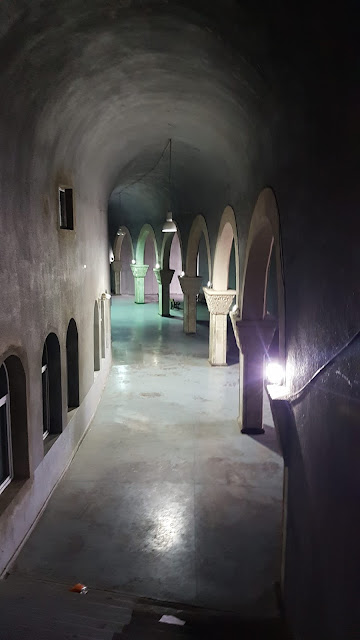 Dinamo Tblisi won the Soviet cup that same season, though, which gave them qualification again to Europe. This time is was the Cup Winners Cup and this time they went on to win it in Germany beating East German side Carl Zeiss Jena. 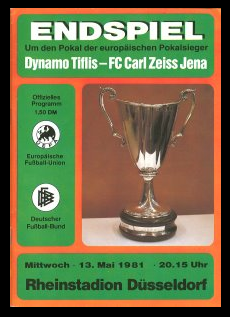 The stadium is impressive and it seems to be used for all sorts of businesses not all to do with sport. There was a fireworks shop and a T-shirt printer.


Of course, I couldn't resist having a T-shirt designed... 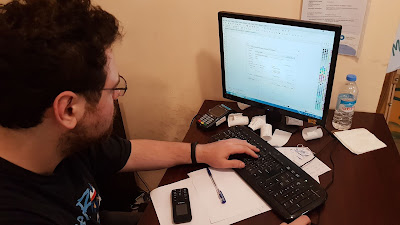 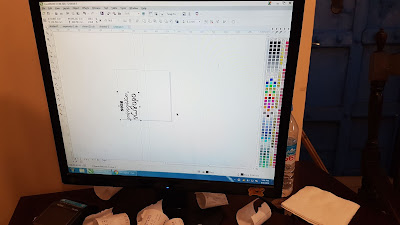 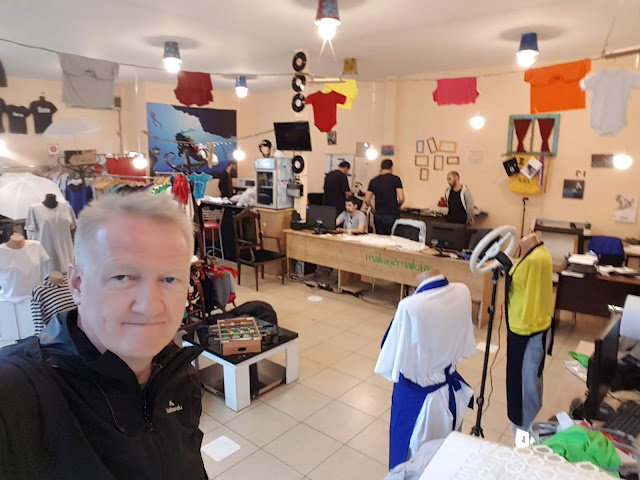 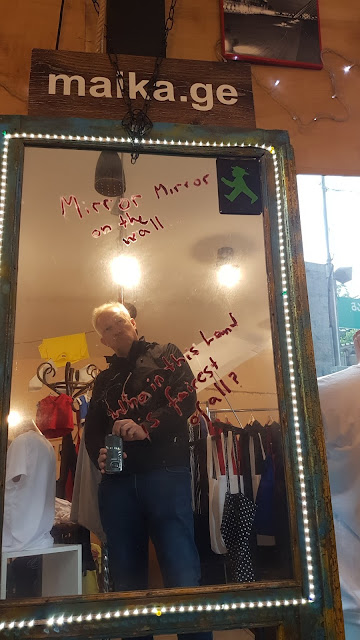 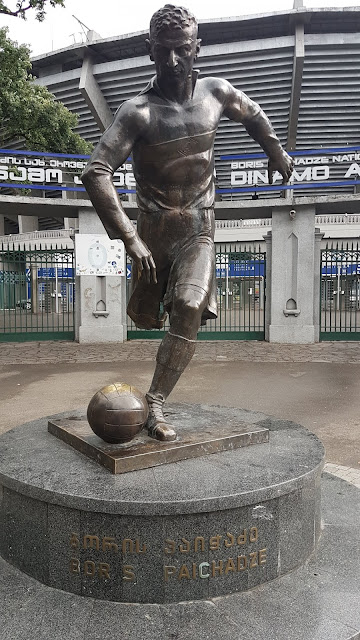 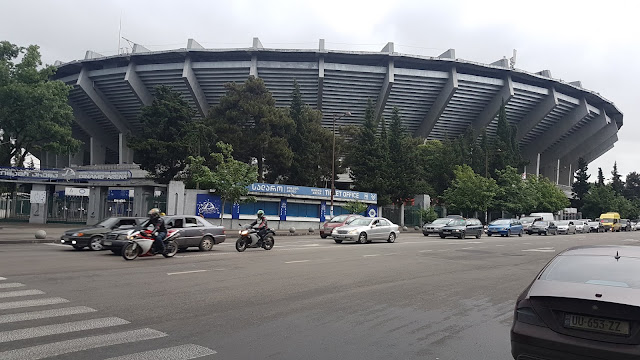 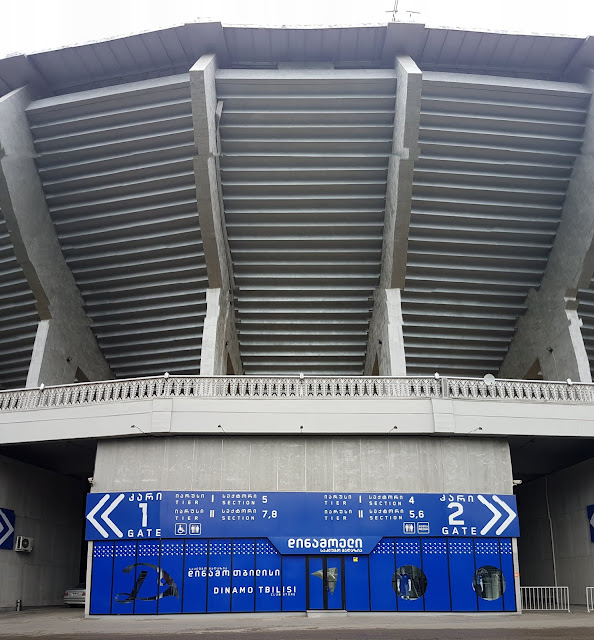 Unfortunately, like my team Forest, Georgian football has gone downhill since the heady days of the 80s. They didn't win a single game in their qualification group.

They're ranked 96th in the world which sounds bad until you realise there are over 250 teams. 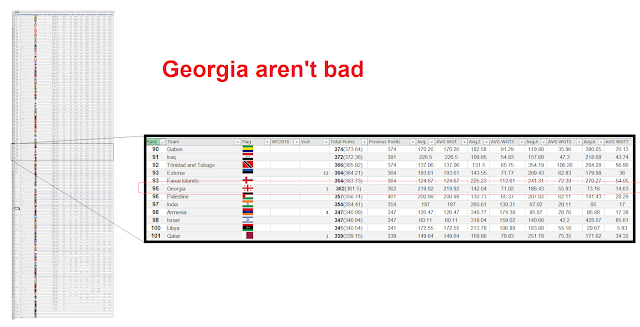 Anyway after Dinamo, I set off to find the funicular and headed up the misty hills over Tblisi. 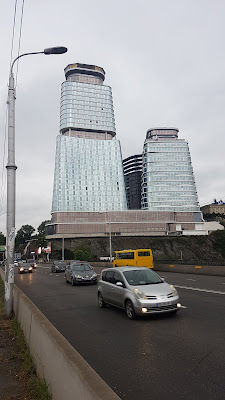 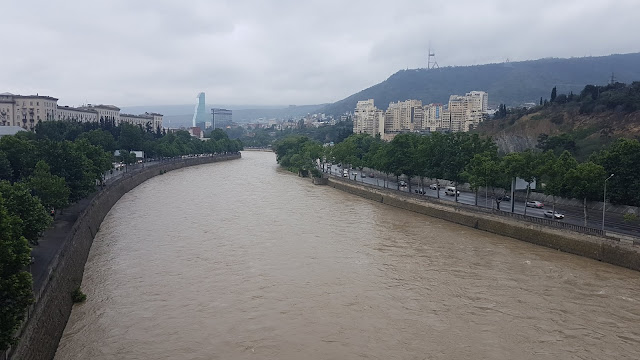 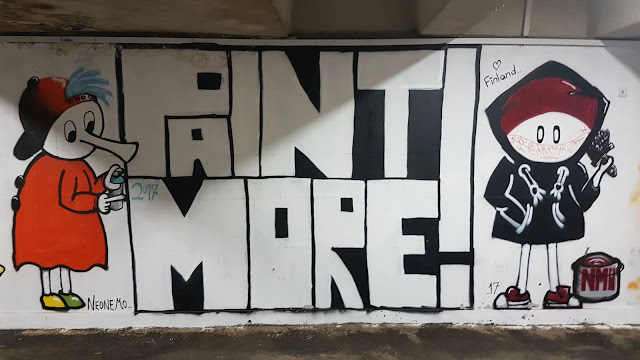 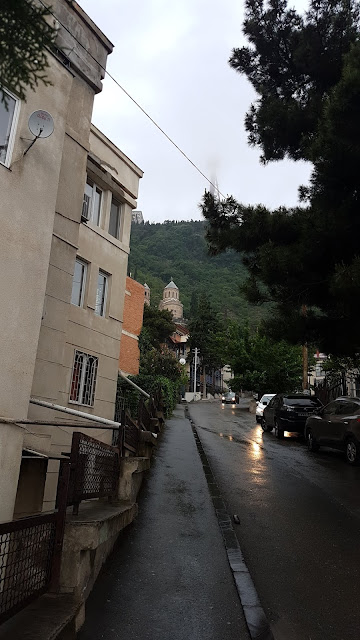 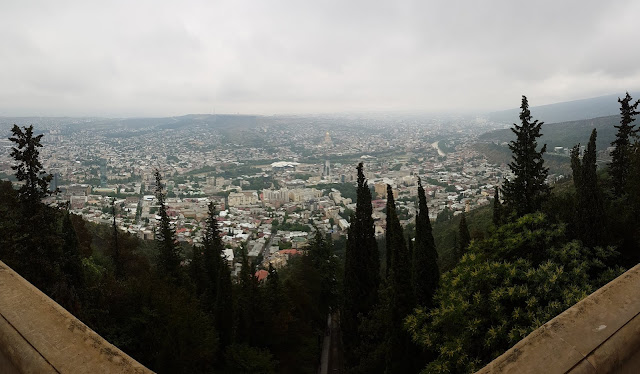 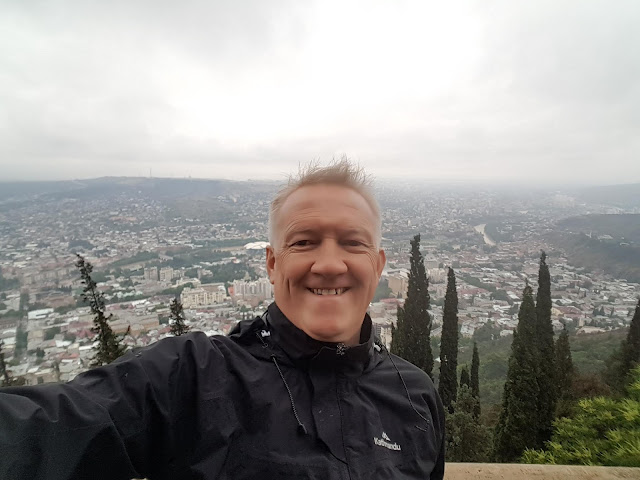 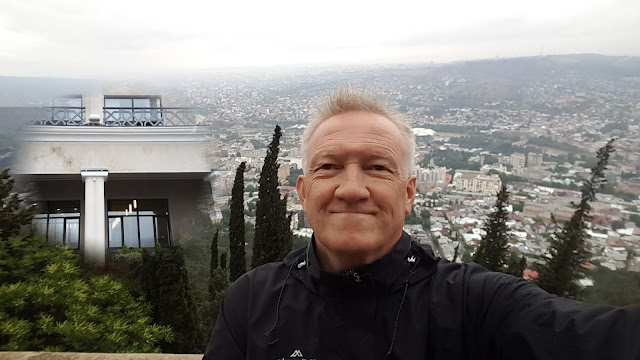 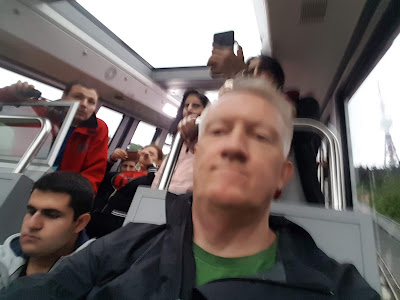 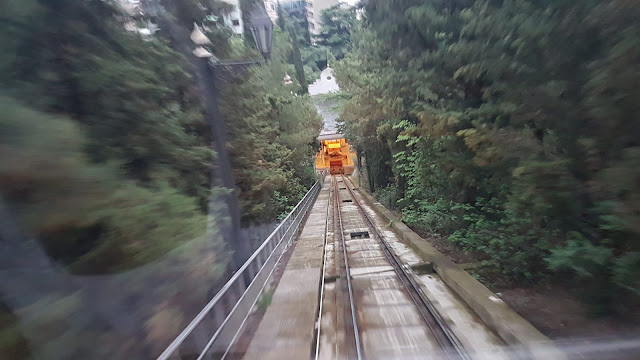 On the way back to the city I came a cross a quaint little shop with a kind of a bar at the back. It was, appropriately, called Cha Cha Corner because that was what was being sold. The English guys ha told me about this so I thought I should at least try a little, "just to taste" as Jonas, my father-in-law might have said.

The woman who runs the store was so sweet and, now I have Russian downloaded to my phone I could have a half decent, if heavily punctuated with Google Translate stops, conversation. She kindly poured out a sample for me but I really can't stand anything that strong. When I told her about Lithuanian Krupnikas (honey liqueur) she poured out another that, she said, was also made from honey. I honestly couldn't tell the difference.

I offered to pay for the drinks but she said the tasting was complimentary. Madloba!!

Tblisi's streets has lots of court yards like this which seem to be from a bygone age. 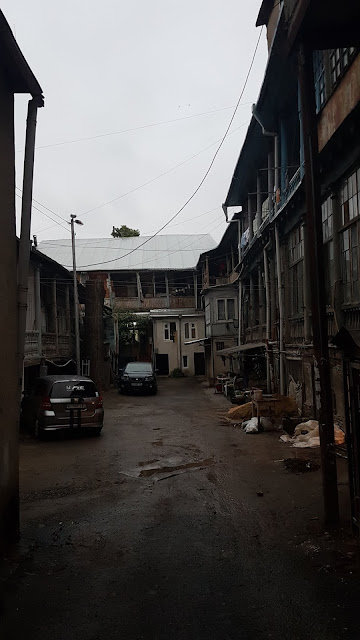 I also stopped to look at a restaurant that was recommended because of its building. Some kind of literary society, I think. 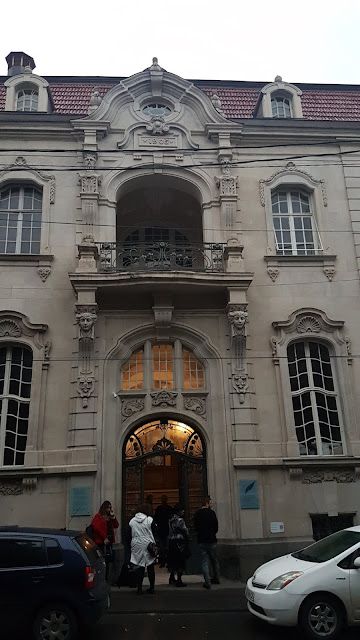 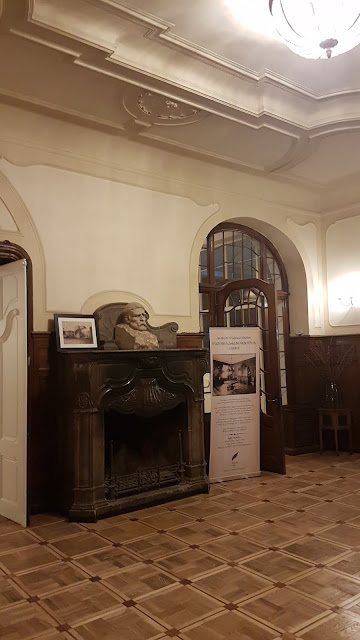 Last of all, I ended up back as Vino underground where I re-sampled exactly the same wine I had the first night. Very nice this time. 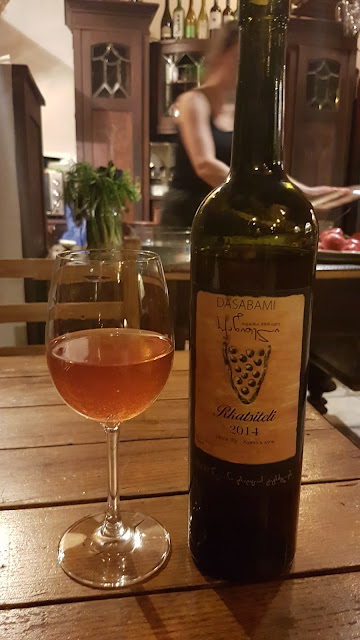 Then, I went back to my room and packed, having first checked the bus stop which went to the airport and confirmed from a couple of people that it did, indeed, run through the night.

I had even had an hour's kip before leaving Old Tblisi Gate and walking through the tiny narrow streets of the old town at 2:30 am - feeling completely safe, I have to add. The final drama in Tblisi was not being able to buy a ticket at the machine. I should have bought a travel card earlier, I think. Anyway, a very kind man tried to help me but when he realised that I didn't have card he just said...

When the bus came, he gestured for me to get on with him and then he paid for my fare with his card and gave me the ticket. When I offered to pay him for it he just shook his head and smiled.

Georgian people might not smile that much but the ones I've interacted with are all very kind and friendly.

Next stop, Yerevan!
Posted by Algis Kuliukas at 5:13 PM