It's kind of the point of this trip to watch the World Cup, but I do believe in balance. I'm not so football mad that I'm thinking about the World Cup all the time. In fact, truth be known, I still haven't really started to get my head in gear over it. I'm sure that will come as we're now in the last week before it all kicks off.

So, here in Istanbul, I wasn't sure whether today or tomorrow would be my football-focus day. Fate decreed that it would be today, though. Turns out I ended up following in the footsteps of Gordon Milne, the former Coventry City boss, who led Turkey's 3rd biggest club, Beşiktaş.


More on that later.

After my embarrassing breakfast debacle, I headed off to do a bit of sight seeing. Really. Where do you start? I have no idea. I bought an eBook on Istanbul but there's just so much to see it's ridiculous.

Professor Google recommended I go and see Hagia Sofia, which is, I am told, a former Greek Orthodox Christian patriarchal basilica, later an Ottoman imperial mosque and now a museum.
I also booked a gastronomic walking tour from Taksim Square, another famous Istanbul landmark. That would be two sights (or should it be "sites"?) ticked off straight away.

I decided to walk to the museum. It's only about a twenty minute walk from here.

On the way, I managed to do a little chore as well. I had awkwardly accumulated 105 Georgian Lari that I'd not exchanged in Tblisi. I didn't want to be stuck with those back in Perth! I passed a currency exchange place that seemed to have all sorts of currencies listed that you don't usually see in Australia, such as Syria and Egypt. And, yes, they did exchange the Lari.

As I walked up a narrow cobbled street to the square outside the museum I was greeted by a friendly young man called Evram that was very helpful. Sure, he wanted me to come back to his carpet shop and hopefully buy some, and sure he was a bit mercenary, but, still, he was helpful.

"What you gonna buy in Turkey? A rug? Some jewelry?"

I tried to explain that we only have a small flat and that both areas that might need a rug already have one. And, in any case I am travelling light. I don't want to have to spend the next six weeks lugging a carpet around on my back. I think he understood and politely retreated. 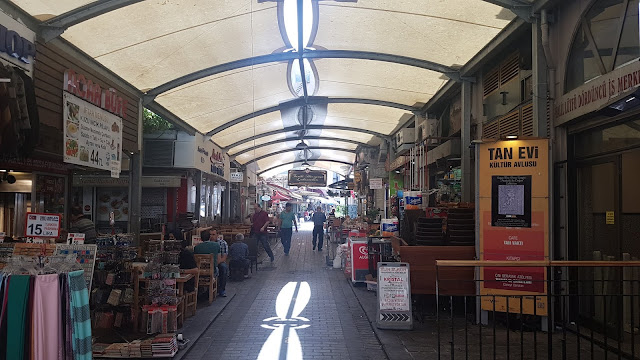 He was a bit a hoot actually. When, inevitably, the subject of football came up he was keen to tell me he supported Fenerbahçe. When I asked him what he thought of Galatasaray, this is what he said. He was keen to do so, even when I asked him if I could record it and put it on my blog - but I did edit out the more violent bits.

Anyway, I did go into the vast former basilica and it was massive and very impressive. It is literally awesome, and not in the sense a young Australian dude might say it. It really makes you wonder how on earth people built such things in the days before these massive cranes that are used in construction these days. The power of religion, eh?


Anyway, as I'm not too big on religion, and I didn't want to be late for my gastro walking tour, so I decided to set off, on the excellent tram system in Istanbul. Sensibly, I'd bought an Istanbulkart, so it was easy-peasy getting on the tram that Evram had told me to catch to get to Taksim square.

In 15 minutes or so I arrived over the bridge over the Golden Horn to Karakoy and the Karatash station. From there is was just a question of changing platform to the amazing underground funicular/metro line to take me up to Taksim square.

Now I needed WiFi to get my final instructions on the actual place to meet so I found a decent cafe and ordered a Chai Late for a change. When I opened up my email, though, I found that the tour had been cancelled due to lack of numbers - but that I would get a full refund.

Oh well. So much for that idea. Google to the rescue, yet again. I looked for local, open, highly rated, quite cheap Turkish Restaurants and it came up with one just ten minutes walk away. Who needs tour guides?

The restaurant was exactly what I was hoping for. I had "Butter Milk" which was kind of like Indian Lasi (a watery yogurt, very refreshing) and a plate of spinach (better than it sounds) followed by some meatballs all washed down by a tiny cup of tea. 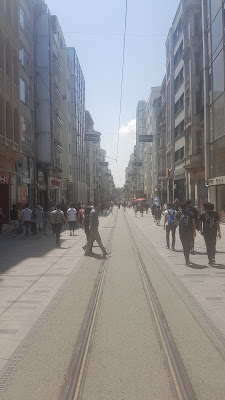 Istanbul is full of ice cream vendors who all double up as tricksters and entertainers. They have a stick to mix the fresh ice cream and use it as a kind of drum stick to get your attention. When you ask them for a cone they play tricks on you before finally giving you the stuff you're getting an increasing craving for. The ice cream is nice, but a bit... slimey?

Now. What do do next? I decided to go and see a football stadium. I had originally planned to see one of the big two Turkish teams - Galatasary (the current champions) or Fenerbahçe. But both were quite a way away. Even though the public transport is excellent and cheap, I wondered if there were any other famous clubs that were closer.

Just twenty minutes away was the stadium of Beşiktaş who had won the league themselves a few times.

I would normally provide lots of nerdy stats about the Turkish league here but, apparently, Wikipedia has been blocked by the Turkish government for some reason so I won't do that. Sorry about that.


It's a beautiful stadium. So beautiful I almost skidded down a grassy bank to my death just looking at it! 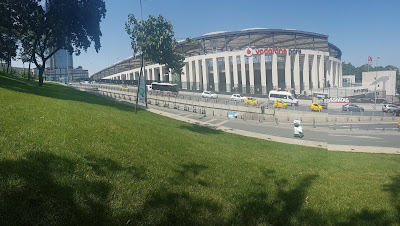 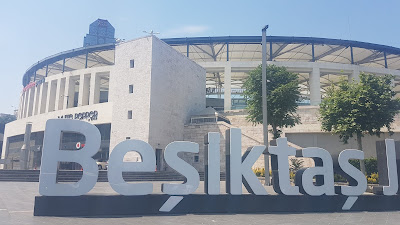 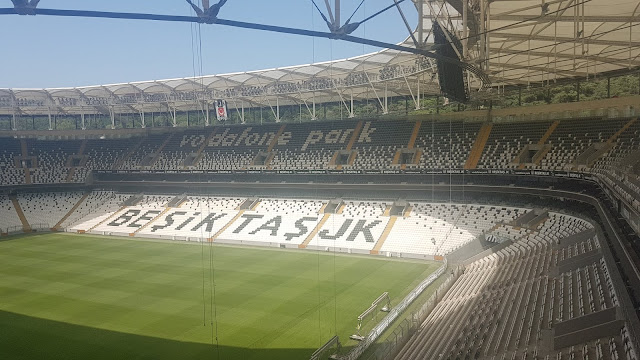 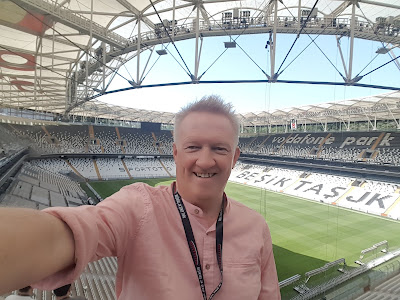 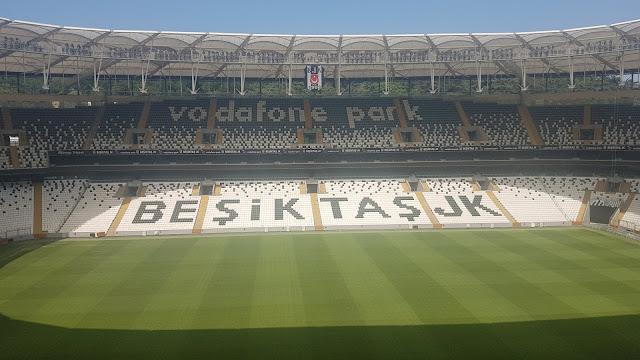 Better still, they had regular stadium tours and I joined one at 3:15 pm along with about twenty or so obviously very keen Beşiktaş fans. They including a lovely young couple that reminded me a bit of Alex & Des in Perth. They were still wincing after losing 8-0 to Liverpool a few years ago. We had a great but short conversation using Google Translate. Technology is wonderful, as Romas Juozelskis once said!

I have to say, it was the best stadium tour I've ever been on. Not that I've been to many - but it is certainly better than Wembley's or the one at the Maracana, in Rio. I was impressed with the way they take you first to the home dressing room, then to the less flash away one, and then lead you out onto the pitch accompanied by a loud cheering sound, as if we were being greeted by 30,000 fans of the black eagles.

Earlier, I talked about following in the footsteps of Gordon Milne. Until I saw his face on the wall of fame here I had no idea that the ex-Coventry City boss had gone to Beşiktaş at all, let alone that he is still loved as their best manager ever.

On the steps leading from the entrance, they pay tribute to the team he built in the 1991-92 season when they won the Turkish league unbeaten, apparently this is the only time it's happened.


But still better was the way they gave you a photo opportunity in the press room. I couldn't resist that one!

Brilliant. In terms of Turkish football, I am now a Beşiktaş fan.

After that, I got the tram back to the hotel, Skyped Lebley and planned what to do next...

As luck would have it, who are playing tonight, but En - ger - land!

It's only a friendly but it's against Costa Rica, another qualifier, and I plan to be watching it in a pub close by. I haven't had a drop of alcohol since I left Tblisi so maybe a couple wouldn't do any harm.

While I'm on the football theme, I have to report that Turkey, somewhat surprisingly, failed to qualify for the World Cup in Russia. They did have a tough group and ended up finishing fourth but for such a football mad country with such a big population (around 80 million), that must have hurt.


They're actually the 15th highest ranking team to have not qualified, behind teams such as Chile, Holland, Italy and ... Wales.


I'm hoping to go on a cruise down the Bosphorous tomorrow so I went to the harbor to check the times matched those on the interweb. It was beautiful down there.


So, after that, I was off tut pub me duck, t'watch sum footy!

Murphy's Law struck again though. The pub Professor Google recommended was closed for refurbishment so I came straight back. I noticed a pub on the way back that were showing basketball but that wasn't the one I'd been recommended anyway, so I ignored it.

Back here, time was ticking and I only found two sports bars reasonably close with ten minutes 'till kick off. I wondered if it was on the tely in my room. Switched it on. Flicked some channels and sure enough. It was.

Problem solved. So I watched the first half here. I thought England played pretty well and passed the ball around crisply. Marcus Rashford scored a cracking goal to put England 1-0 up.

As the half ended it was prayer time again. I do find the chants that emanate from the mosques five times a day rather enchanting to listen to. But I expect, like Mozart Requiem, the words do not quite match the music.

At half time I figured if I can watch the match on a tely in my room, so could any bar with a TV. So I selected to No 2 on the list, the Red River Pub, and marched there as quick as I could. Turned out it was the pub I'd walked past about an hour earlier with the basketball on. But now, they were about to watch the second half from Elland Road, Leeds.

The reason they'd changed the channel, it turns out, was because a chap at the bar, called Daniel, from Leeds, asked them to. England didn't play so well in the second half but they still scored a second to make it a comfortable 2-0 win.

I had a nice chat with Daniel. (Thanks for paying for me tea!) He does an incredible amount of travelling for his job and was going to leave Istanbul to go back to blighty in the morning.

So, then, it was off to bed for me after a bit of an average kebab.

Posted by Algis Kuliukas at 3:35 PM