I had a relatively quiet, sedentary, day in Klaipėda. Since I left Perth this was the day I certainly did the least travelling. The furthest I traveled from the bed slept in last night (the same one I'm typing this now) was 550 m. It's nice to slob out sometimes and that's what I did today. The only important thing on my "to do" list was to find a decent bar to watch England's second group match against the lowest ranked team in the tournament, Panama, who qualified, let's not forget, at the expense of the good old U S A. 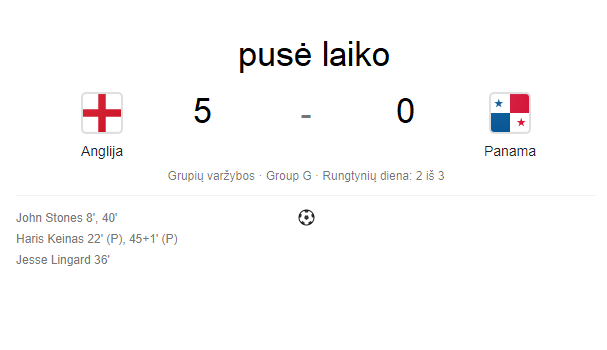 Day 27, specifically noon on this day, marked the half-way mark of my tour. It's a thought that always leaves me sad because I know it's kind of down hill from here. I love travelling but I know I can't do it forever. I have to earn the money to pay for such trips and the half way mark is a reminder of that salient point.


Having only arrived at the hotel at 1:30 am I was hoping for a bit of a lie in but my circadian clock still woke me up at 7 am. So I finished off yesterdays blog.

Up for breakfast then, and what a nice brekkie it was too.

After that I had couple of "chores" to do - to make sure I was booked in somewhere  nearby tomorrow night and that I had a way to get from there to Riga the next day.

As with the booking last night, it seems something went wrong with my Booking.com reservation for tomorrow, which I'd planned to spend in the Latvian coastal port of Liepaja. But after the trauma last night I decided to opt for a simpler option and stay in much closer Palanga instead. I will then fly to Riga the day after.

Having got that all sorted, I did a bit of an explore of Klaipėda city center to try to find the optimal bar to watch England's match against Panama. The receptionist seemed pretty confident the bar here was the best and after a bit of walking around, I concluded she was probably right. 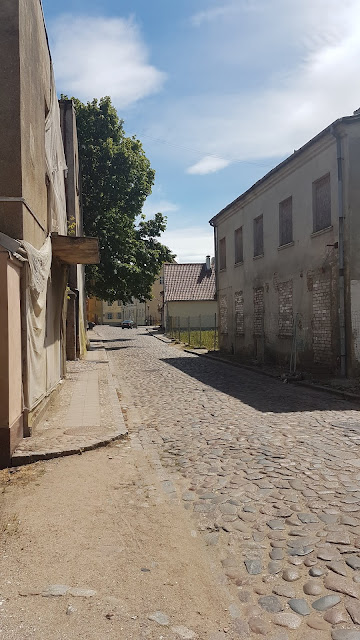 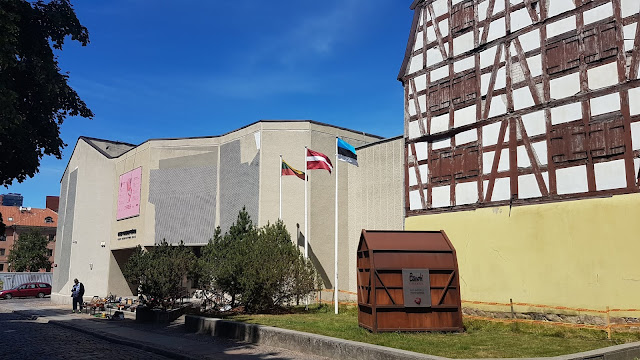 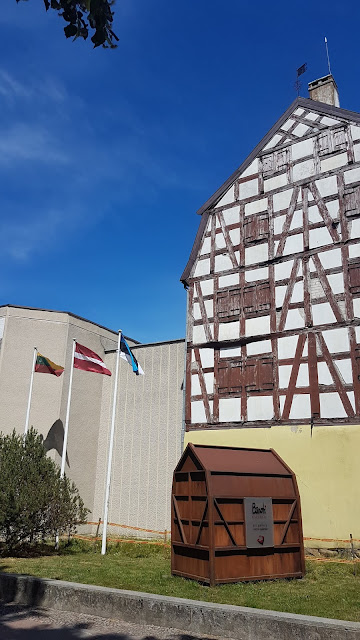 I settled down in a bar in which I thought I was alone until I realised that behind me was Stan, Stan the Sunderland fan who was doing a World Cup related tour of the Baltic States.

Stan does contracting work all over the world so loves travel too.

"Wouldn't it be great if England really stuffed them today, something like 7-0" I offered

He laughed but suggested

"In an hour we'll probably be happy if England scored"

For once, I didn't jinx them and after a bit of a dodgy start, England took the league on 11 minutes with a John Stones header as he arrived unmarked in the box from a corner. Relief quickly turned into joy when they scored a second on 22 minutes with a rocket of a penalty from Harry Kane after, I must say, an innocuous looking challenge in the box


Then 14 minutes later Jesse Lingard scored a beauty to make it 3-0.


I was feeling a little bit self conscious as we might have been annoying other people in the bar some of whom were probably not watching the game.

Stan and my shouts of "Yes!" and "Get in!" every ten minutes or so would have sounded strange if you were a family out for a Sunday lunch.

Even though they were already 3-0 up, England's goals/per minute rate actually accelerated as the first half closed as they got two more - a scrambled effort from Stones and another penalty from Kane. No doubt about that one as he was practically rugby tackled to the ground.

If it carried on like this England might get the highest ever score in a World Cup match - which was Hungary's 10-1 win over El Salvador in the 1982 World Cup.


Amazingly, despite that win, Hungary still failed to qualify from the group stages... 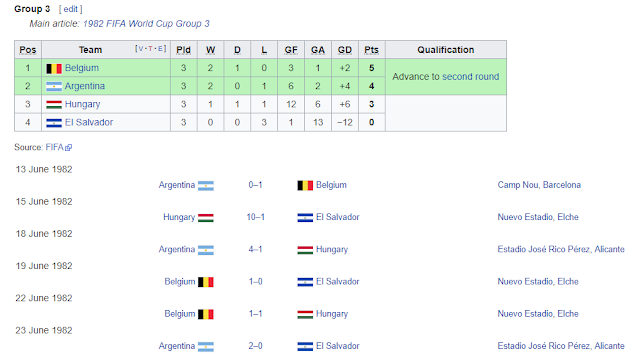 Anyway, the second half was a bit of an anticlimax, as is often the case when there's a big half time lead.

England got a 6th on 62 minutes - a lucky deflection off Harry Kane's heel when he looked off side to me, after which he was taken off for a rest. The substitution seemed to signal the end of England's intent though and it was a bit disappointing that they took the foot off the peddle and allowed Panama to score their first ever World Cup goal in only their second match in the finals.

Their fans celebrated as if they'd won the cup.

Anyway, the win was still England's biggest ever at a World Cup and big enough for them to match Belgium's goal difference and goals scored so, apparently, as they have picked up fewer yellow cards, England now top the group and have definitely qualified for the knock out phase.

After this I went upstairs and had a bit of a kip before returning to the same bar for the next match.

This was a great match with Senegal twice taking the lead and Japan twice equalising.

I had a lovely bowl of fish soup as I watched the game on my own.

Here are the goals...


After this I did a bit more site seeing in the cold and quite miserable weather. 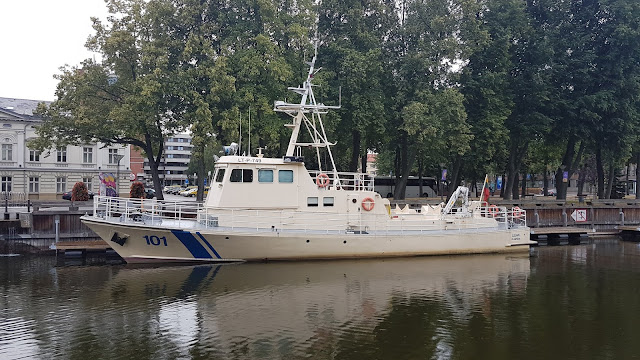 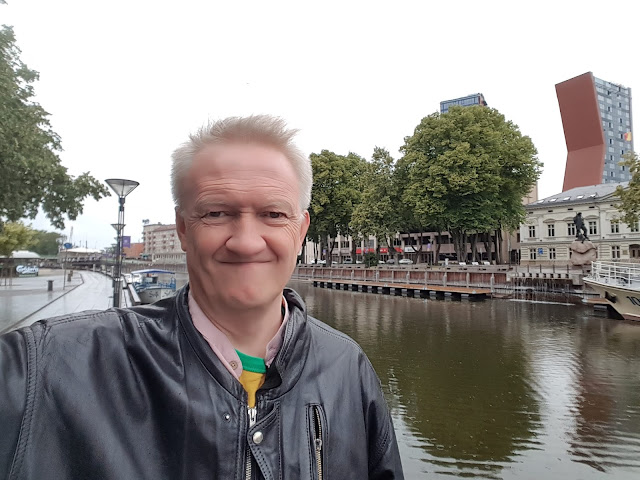 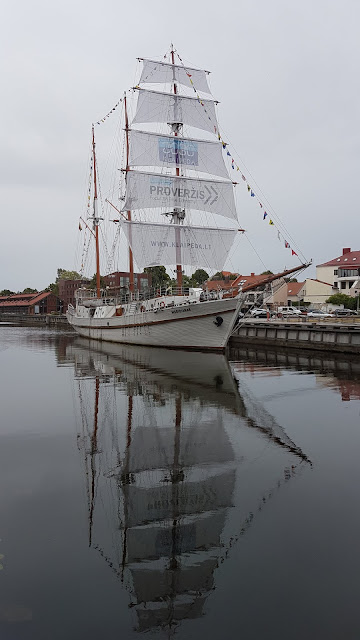 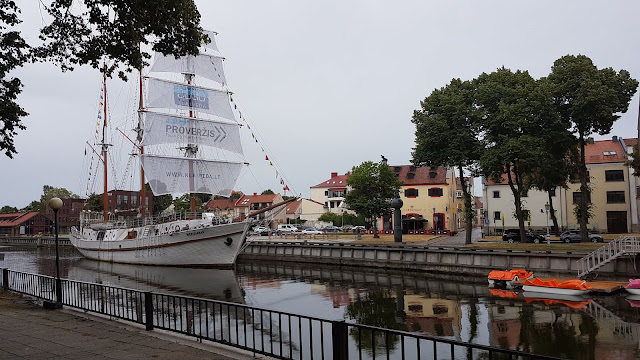 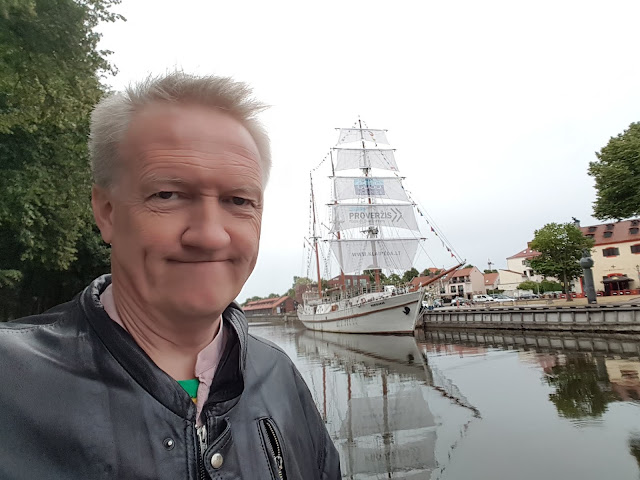 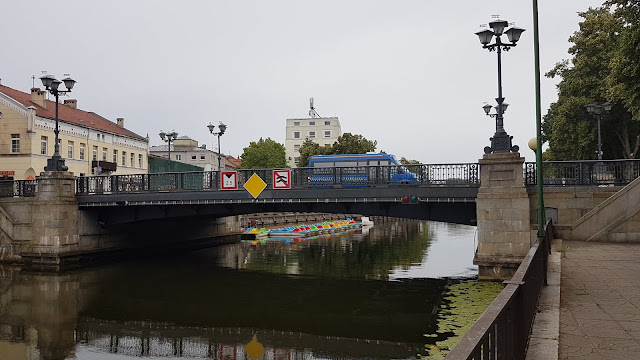 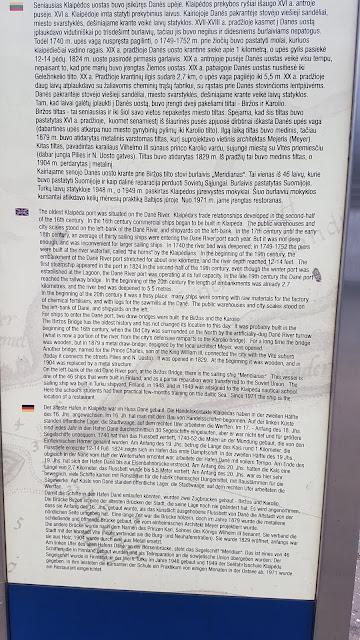 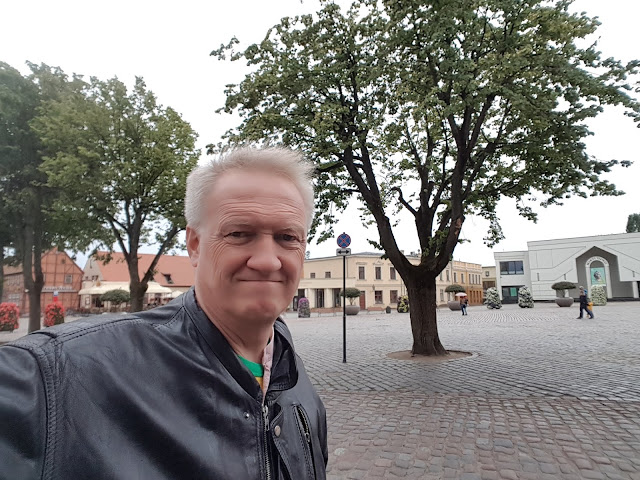 Just like in Vilnius, there is a Forto Dvaras restaurant that specialises in Lithuanian cuisine. There had been some bad reviews on Google but I noticed the restaurant was full so I went in anyway.

I had koldunai, ticking off another box on my culinary "to do" list. 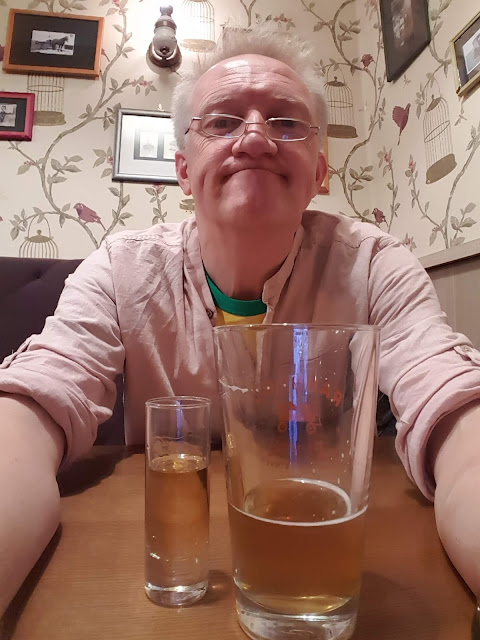 So, across the square to the "Irish" pub for the last second round match. Match 32..

The bar was positively buzzing for this one.

I sat at the bar and chatted to a couple from Leeds who were also touring around. I had the American IPA. Very nice.

Poland have been awful in this World Cup and were easily brushed aside by a reinvigorated Columbia side that must fancy qualifying now, despite their surprising defeat to Japan in the opening match.

By the time the third goal went in a large group of fans next to me started cheering. After the match, as I left, I asked them "are you from Colombia?" as some of them had dark, Latino style beards.

"No we are Polish. But we are sh&%t so we are supporting Columbia."

I offered my condolences as Poland cannot proceed now.

"As an England fan, I know how you feel. Sorry!"

But at this World Cup, although it's still early days and England's opponents have not been the best teams in the world, they have a record that is only bettered by hosts Russia, who have conceded one goal less.


There's been a spate of goals the last two days taking the overall average up to a more respectable 2.66 goals per game.

So, we're getting to the "pointy end" of the World Cup now. Every team has played two games and we now get to the final games in each group which are played simultaneously so as not to give the team that would play last and advantage knowing how many they'd have to win by. 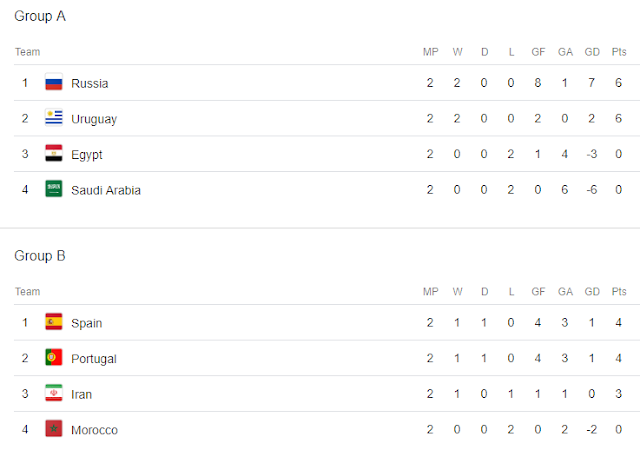 Russia and Uruguay have already qualified from Group A and each team will play a qualifier from Group B. I think there is a good chance that Iran might beat Portugal which would mean that winning Group A would give you a better match. So I'm predicting Russia and Uruguay to play out the tournament's first 0-0 draw making Russia the group winners and pairing them with Iran in the knock out round. Uruguay to play Spain. 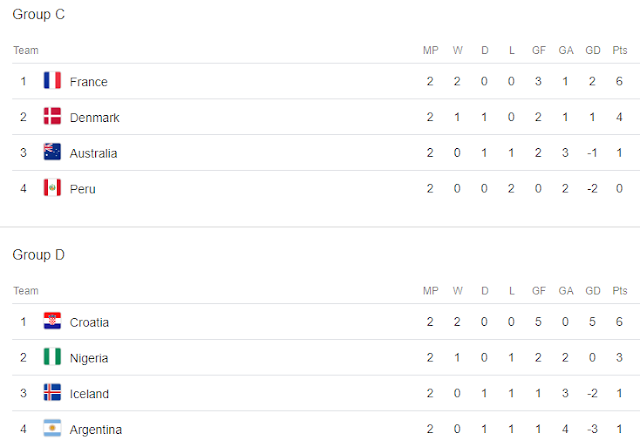 France and Denmark will surely play out a draw (maybe another 0-0) to push Australia out, even if they were to beat Peru, which I don't think they will anyway. You have to fancy Argentina to hit some form and beat Nigeria to qualify in second spot, though, so I'm predicting France v Argentina and Croatia v Denmark in the next round. 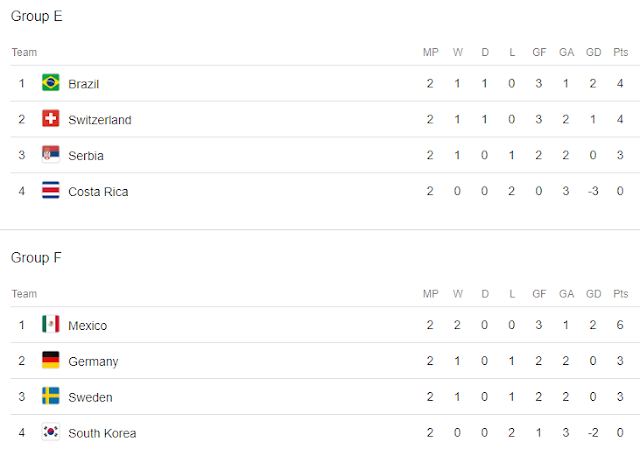 Brazil should beat Serbia to win the group and Switzerland should therefore qualify in second place no matter how they get on with Costa Rica. I can't see Sweden beating Mexico so we should the intriguing prospect of a repeat of the last World Cup semi-final between Germany and Brazil in the round of 16. To me that's a good thing. One of the heavyweights will have to go out even before the quarter finals. This should give Mexico an attractive looking match (meaning one they could win) against Switzerland and so a possible place in the quarter finals. 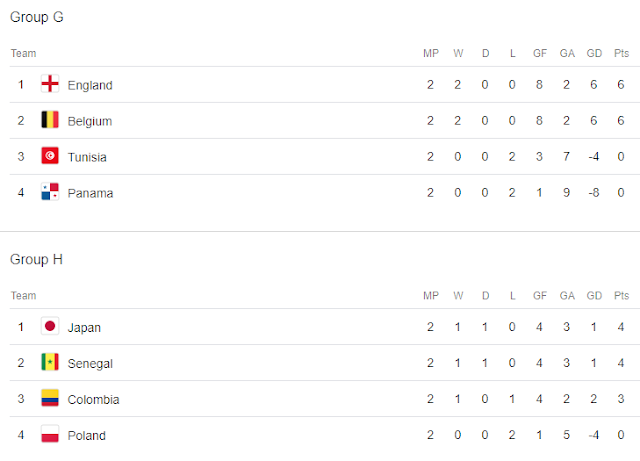 Finally, as England and Belgium have both already qualified and there doesn't appear to be much incentive to win the group - the opposite actually as it looks likely to provide a path to play Brazil or Germany in the quarter finals, their game will be interesting to watch from that point of view. Will the teams be queuing up to score own goals so that they do lose?

In Group H the key match will be Senegal v Columbia, with Columbia needing to win to qualify and Senegal happy with the draw. Japan are almost certain qualify unless they lose to Poland more heavily than Columbia beat Senegal or if that game is drawn and they lose.

Who knows what will happen but perhaps the best outcome would be Belgium to win the group and play Columbia (if Japan won their group) with England finishing second and playing Japan.

If, on the other hand, the round of 16 looks like the matches below, England could end up playing Brazil in the quarter finals. Not an especially attractive prospect but you never know. Maybe this is England's turn for success.

Today, I'm catching a bus to the nearby seaside resort of Palanga but it doesn't look like beach weather. Grim and overcast and cold.