So, it was France that won the 2018 World Cup, as many had predicted. We were privileged to watch it in the country playing in their first ever final, Croatia. I was Split right down the middle on this one. I would normally back France against most teams in the world simply because I have several family members who are French and, of course, I love France. But I always like to see success being spread around and in terms of World Cup wins France had won it once and Croatia never. Also, one must remember Croatia is a country of just 4.2 million people, compared to France's 66.9 million. That's about 16 x bigger. Then there's the fact Croatia beat England. Most of all, of course, here we were in Croatia to watch the match.

I had to wear a red and white chequered shirt today. 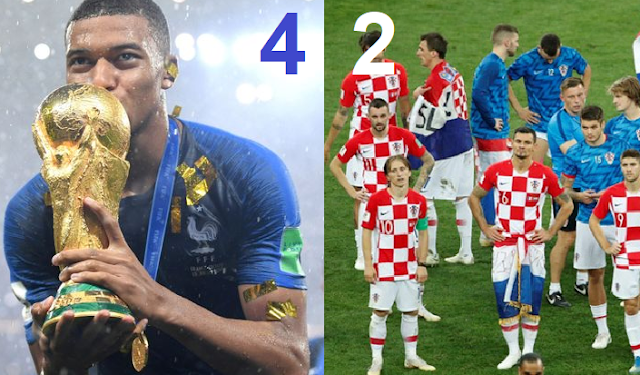 After breakfast I caught up with my blogging while Leb did a bit of shopping on her own, then it was time to focus on the World Cup Final. I needed to buy a shirt. 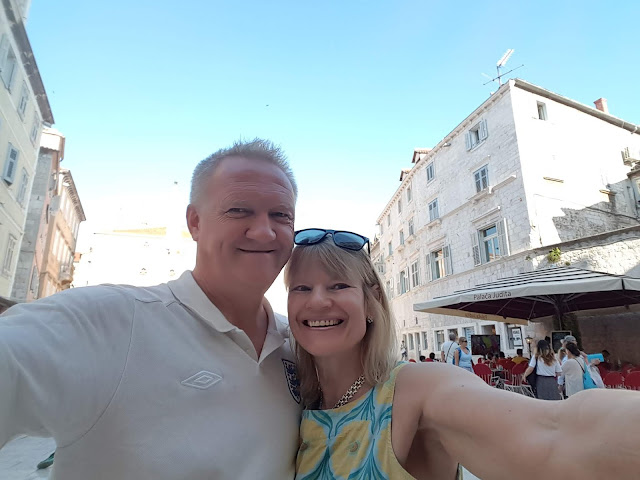 We grabbed a pizza roll to eat before I found a market stall selling exactly the shirt I was after - obviously for Croatia but with no badges or adverts on it so you can wear it anywhere. 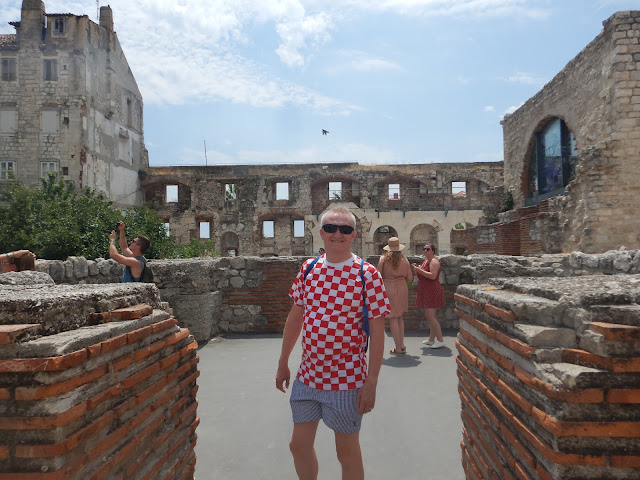 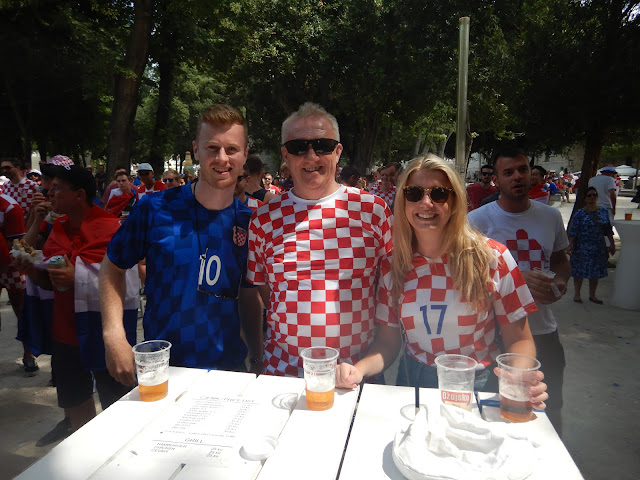 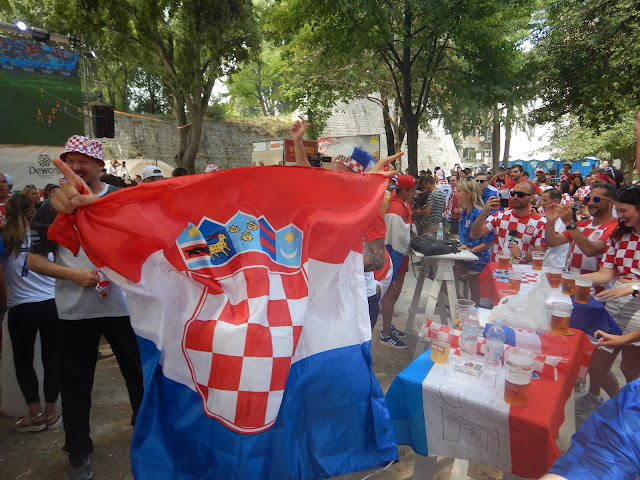 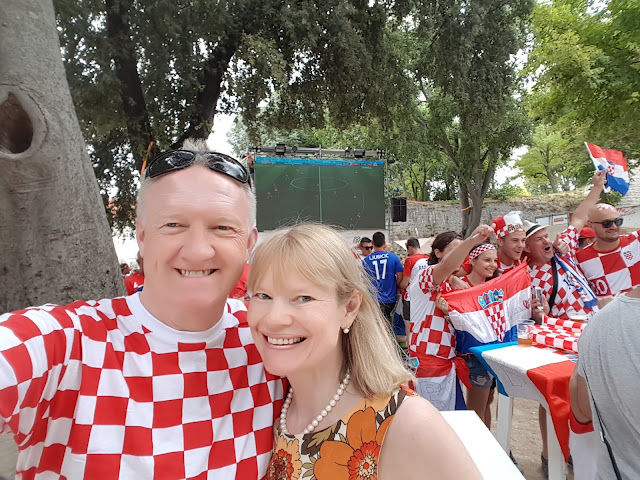 There were two open air options in Split today, one in a park next to the town gate and one on the promenade. We visited both before deciding on the former and, with three and a half hours till kick off took up a nice place under the shade of a big tree with a good view of the screen.

The atmosphere soon started to build up with hundreds of Croats and many wannabes including Leb and me and a couple of scousers - a Liverpool fan and Everton fan - childhood sweethearts still together. 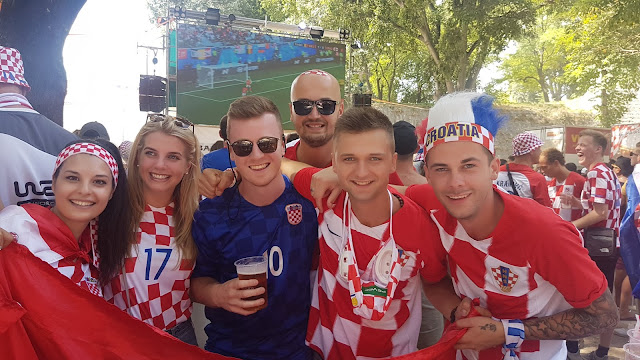 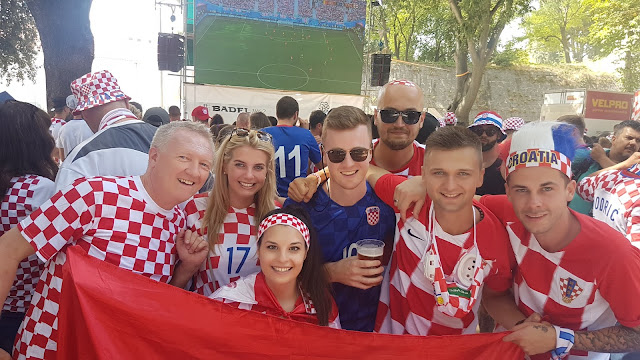 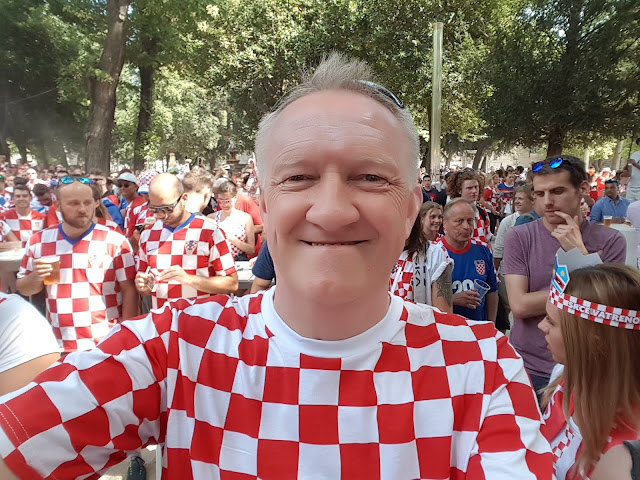 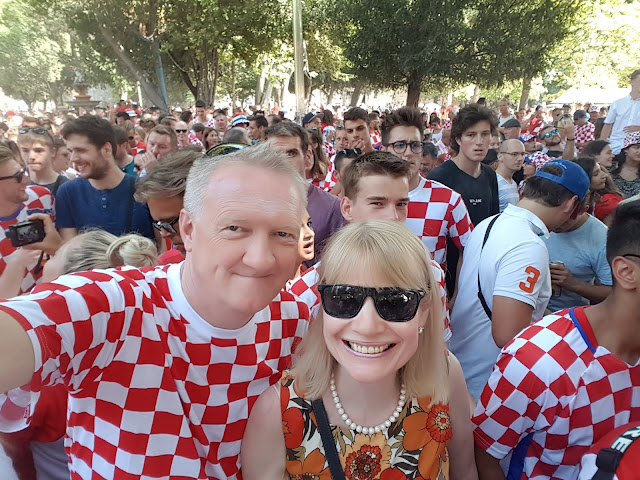 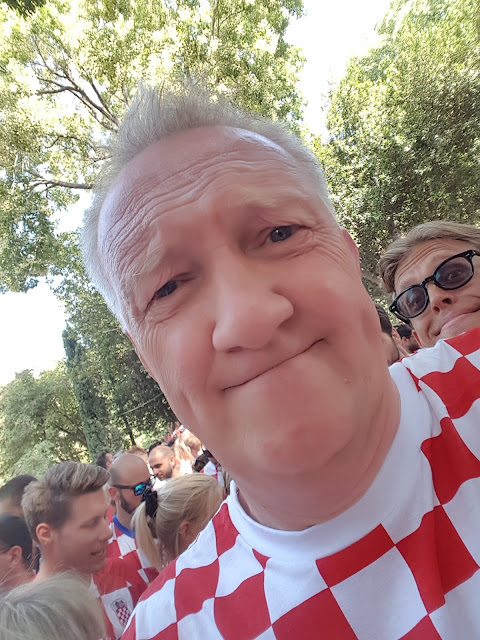 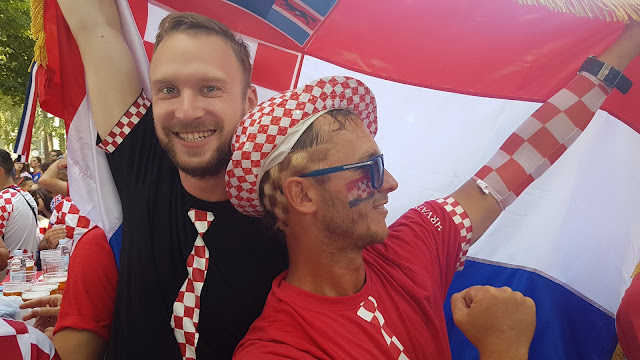 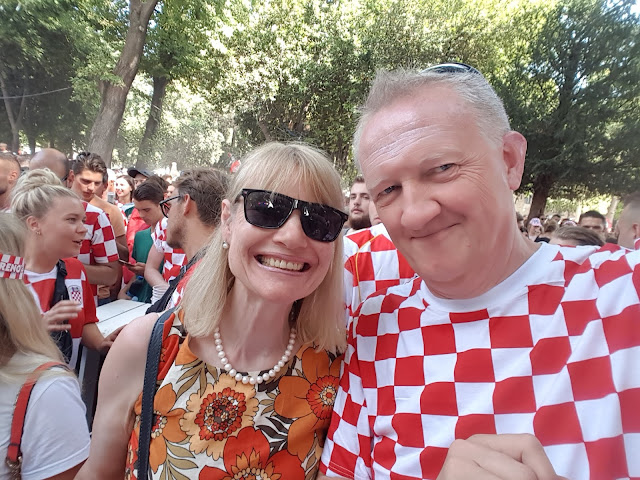 The Croatia fans were all great and friendly and the mood was really happy in those hours before the World Cup final. 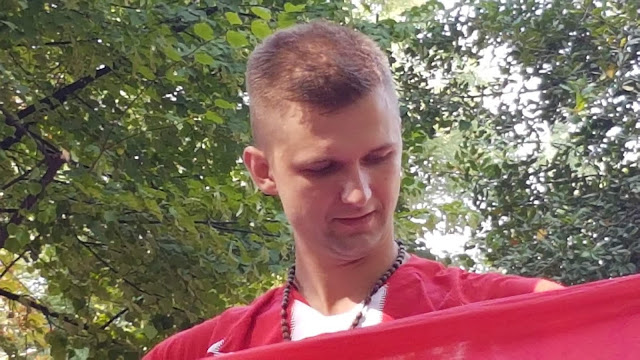 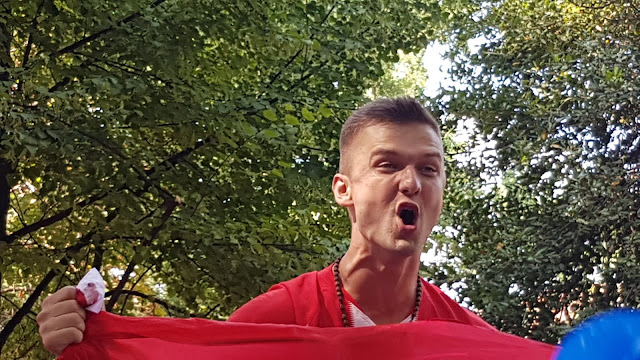 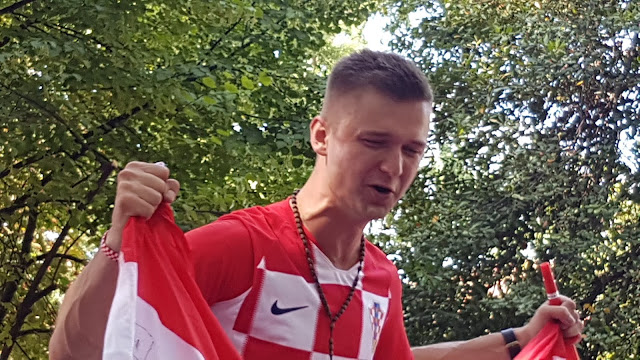 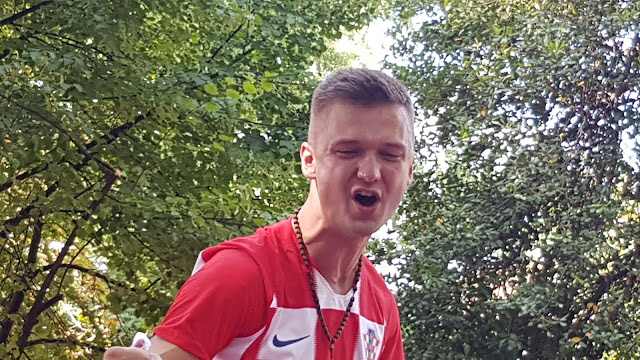 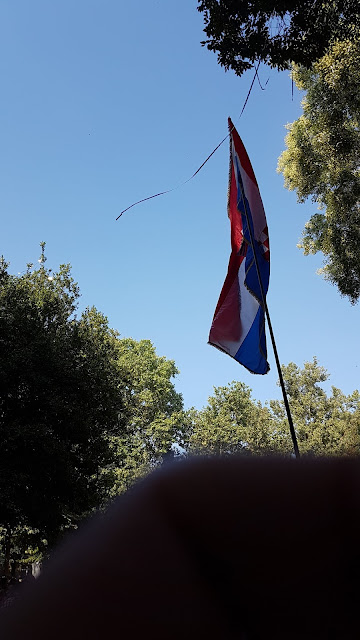 They tried to teach me a couple of songs...

The atmosphere was building up nicely...


...but as the enclosed area got more and more packed we began to realise a major flaw in the organisation of the event. The toilets were on the outside of the secured area. So, if you needed a pee (and everyone was drinking gallons) you had to leave the area and queue to get back in - assuming you would get back in. One can only imagine that many young men peed into plastic cups and placed them under tables. Hopefully, there wouldn't be a goal while they were holding one.

That problem began to niggle me as my bladder started to fill too. Also, it started to really irritate me that here we were, a captive audience, waiting for the World Cup final to start but rather than watch the end of tournament ceremony, which might have been cheesy but is always a "must see" in my book, we were played a never ending stream of adverts and patriotic Croatian songs.

Clearly the latter made the former more palatable for the majority of fans - but not me.


Eventually, with about 14 minutes till kick off, they did start streaming the coverage from Moscow so we did, at least, see the national anthems.

Croatia started by far the strongest team and dominated the first twenty or so minutes. I don't think France had the ball in the Croatia penalty area before they scored a lucky own goal off the head of Mandukic. I must say I was pleased that it was him as he'd put England out.


Croatia are nothing if not resilient though, and soon they came back with a great goal from Perisic.


But, as luck would have it (and the French did) they fell behind again, another ten minutes later. This was a somewhat controversial penalty. I must admit as soon as I saw the replay I knew it would be given if the ref was compelled to go to VAR and that's what happened. The ref could have refused to look, I suppose, and perhaps that would have been better justice for poor old Croatia who really deserved to be winning, not losing.

As the half wore on and the crowd packed ever closer to us, Leb and me got increasingly frustrated with the number of (young) people smoking around us, I swapped places with Leb so that it would be me who'd get the brunt of the cigarette smoke streaming from the endless fags of the little, weedy bloke to our left.

What is it with these people? Why is it so cool to smoke in Croatia? Do they not know or care about the health risks here?

To be fair, the last time I felt this way I was in Paris before the Euro 2016 cup final when it was the young French people who were the culprits. I remember sitting at a table outside a bar and every one of about 16 young people all had a fag on.


So, desperate for the toilet we decided to leave the smokers to it and nip back to our hotel for a pee to watch the second half, albeit on a smaller screen with much better atmosphere, literally, if not metaphorically.

So we split the cup final into two halves in two venues.

It's great staying in places in the town center as you can nip back there from anywhere.

I couldn't help feeling sorry for the staff who were on duty during the match. How frustrating would that be? Having to serve foreign tourists watching your country played in the World Cup final. One waiter we met told us he would resign before the match so that he could watch it. I think he had his priorities right. 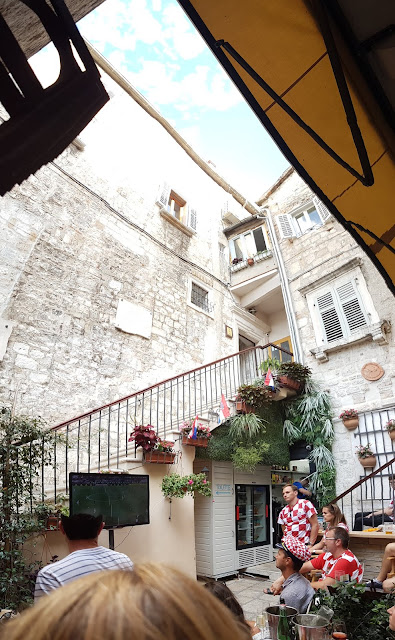 The second half was a bit of an anti-climax as Croatia continued to throw men forward looking for the equaliser their first half play had deserved.

Unfortunately for them, France have a very solid defence and, like with the Belgian semi final, they withstood anything Croatia threw at them and then grabbed two killer goals to break four million Croatian hearts.

Hugo Lloris gifted Croatia with a consolation goal but it was too little too late.


Didier Deschamps should be congratulated on winning the World Cup for France both as player and manager but I must say I am not a fan of his defensive tactics. With players like Mbappe and Griezmann they surely should be lighting up the play not dulling it down.

Ah well. I'm only jealous, of course. How I wished that had been England. Never mind. There's always next time. 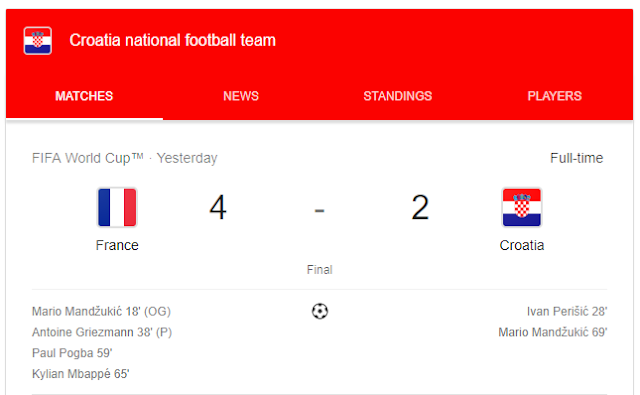 After the match we strolled around a slightly deflated, but still remarkably jubilant Split city center. 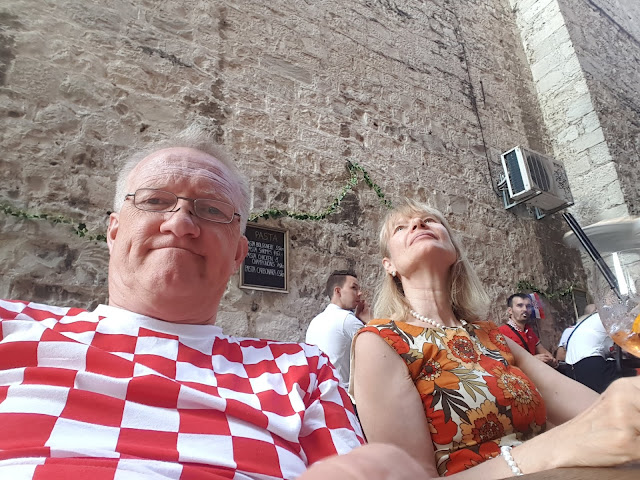 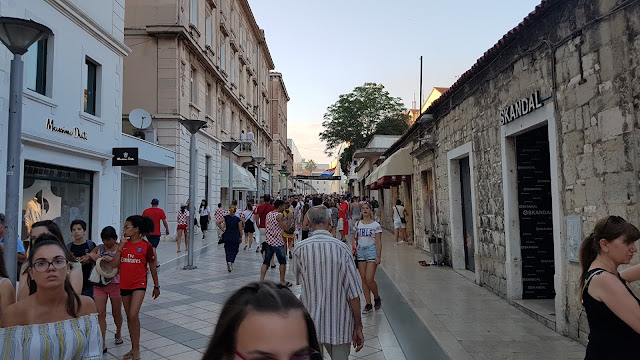 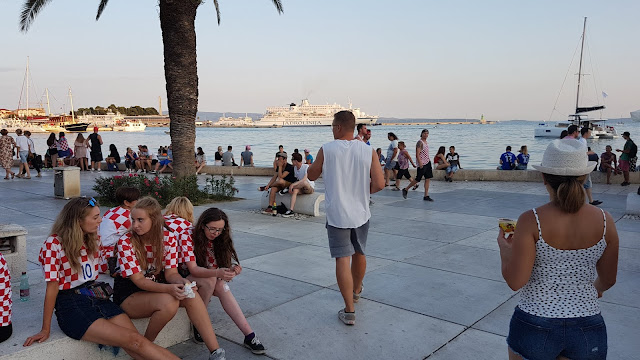 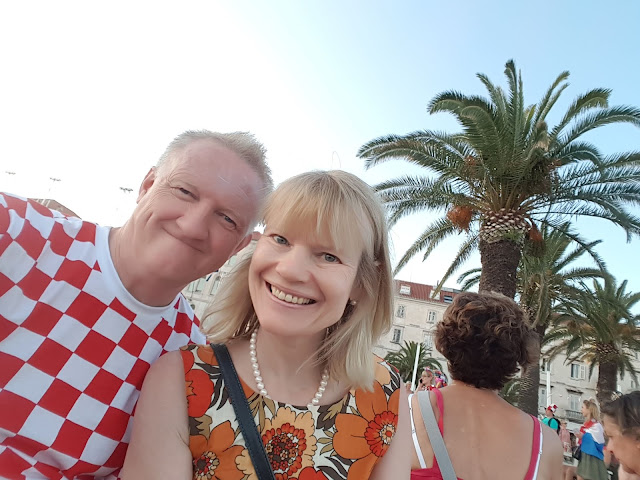 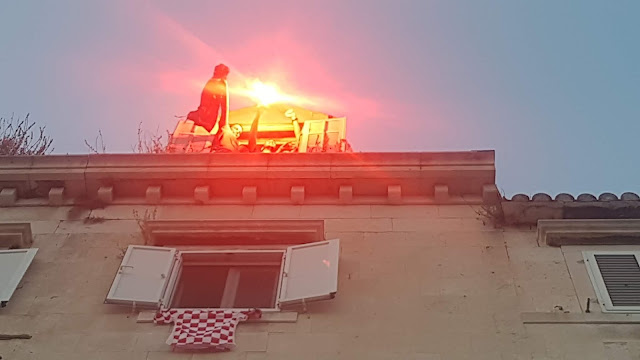 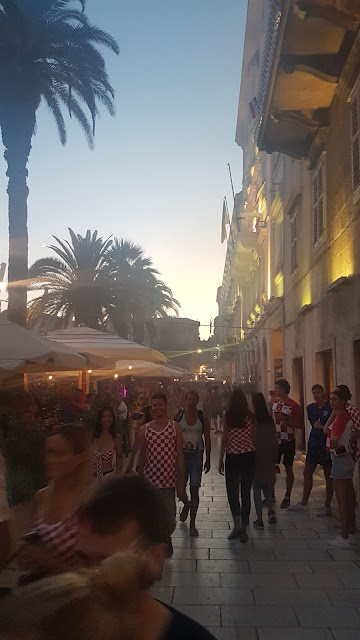 So ends the World Cup for another two years before qualification starts all over again.

Posted by Algis Kuliukas at 3:29 AM