I think a bit of jet lag caught up with me today. I had plans. Oh yes, lots of plans. I was going to seek out Garry Kasparov's first chess school, visit a few museums and get a tour around the old town and ascent the Maiden's Tower.

This was the one full day I spent in Azerbaijan so I wanted to make it a good 'un. 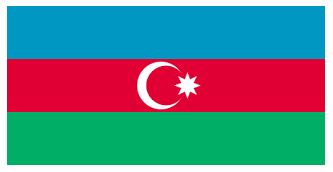 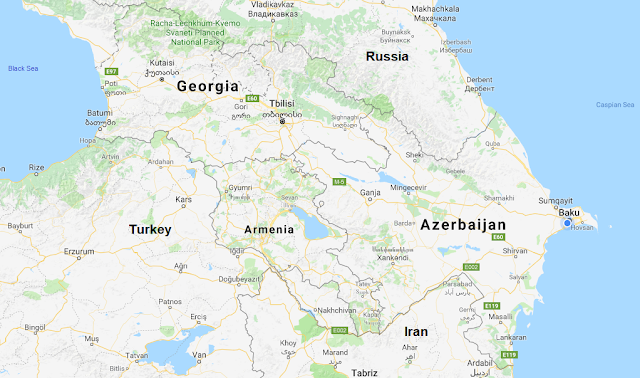 I woke up early enough and did yesterday's blog and then went down for a very nice breakfast - the kind with lots of choices. I had boiled eggs, sausage, ham, cheese, some noodly stuff, another unknown dish which seemed to be little parcels of cheese in spinach, some yoghurt and some tea and coffee. After being told that "Teshekur ederim" although not bad as Turkish and Azerbaijani are pretty much the same language, it's not what the locals would say for thanks. So, from now on it's "Çox sağ ol" pronounced "choc sagol".

Azeri's script appears to be like Turkish too, and very similar to Latin.

There's a great guy called Paul in cyberspace who does a series of information packed programmes on languages. If you want to know more about Turkish (and Azerbaijani) watch this...


Then I had one of those panic moments as I realised I hadn't printed off the ticket for my next flight to Tblisi. But a but of digging and I found the email and then I was able to check in on line. So all good there. I've organised a taxi for the morning so hopefully no dramas.

Then, it was off to explore Baku with lots on my "to do list". I set off to the coast to walk along to a museum that caught my fancy.... the carpet museum.

On the way, I saw some interesting things for sure...

Fountain Park has some interesting fountains...

And there's an iconic statue of a girl standing outside MacDonaald's talking on a mobile phone.


Baku has lots of buildings with wooden balconies that seem to be precariously positioned.

Near the sea front there's a lovely park with a grand old carousel for the kids.

Over the bay is Crystal Hall where Baku held its first major international event - the Eurovision song contest. It doesn't look much during the day but, apparently, it projects a magical laser show into the sky at night.

There are some nice old gardens too...


And, of course, a massive Azerbaijani flag...

Baku has many building projects going on. It's definitely a city on the move. I'm not sure what this building will be but it looks impressive. 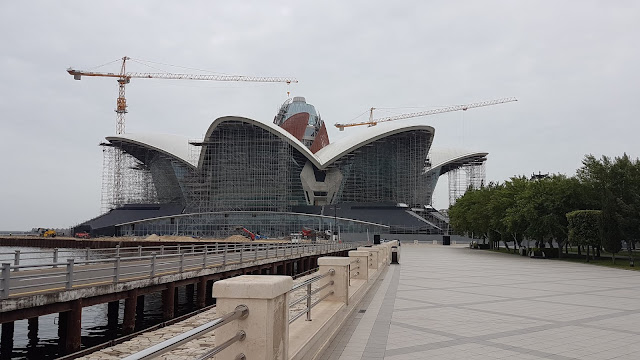 ... but nothing would prepare me for what came next.

It is a truly amazing structure: A museum about carpets in the shape... of a carpet.

Inside there is a celebration of the art of carpet making, specifically the Persian rug type. Apparently Azerbaijan has a long history of the craft evidenced by many artifacts that have been found dated to before the bronze age.

The museum is on four levels, the bottom one has a few exhibits and the shop, the middle two show the history of the art and the top level showcases some modern designs.

After spending an hour looking at rugs, I was in need of a bit of fun so I went to go on the funicular. Unfortunately the man who ran it was on a break and so I had to go elsewhere. 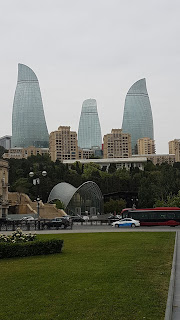 I thought I'd go on the Baku 'eye' but as I approached it became clear that it wasn't moving. So much for that idea.


Also on my list of things to do was to find Garry Kasparov's chess school but Google didn't help me find that either. Apparently the "young pioneers" soviet school he was at has now gone.

I queued for ten minutes to buy a ticket to go to the top of Maiden's tower but the guy at the kiosk couldn't break a 50.

I was getting a bit hot (and a little sun burnt) so I tried to find a bath house that had good reviews but when I turned up there is was a seedy looking massage parlour. "Ve hif no pools here" I was told.

So, after a long walk around the narrow streets of the old town I finally stopped for a cup of tea and a bite to eat. I tried to Skype Leb but there was too much noise and the Wifi wasn't great. 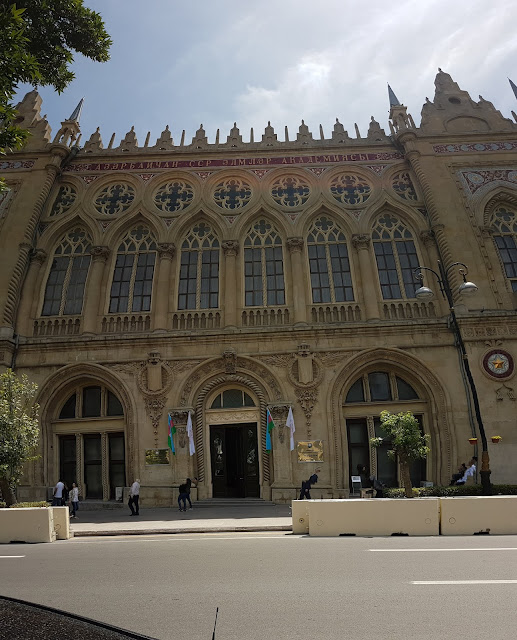 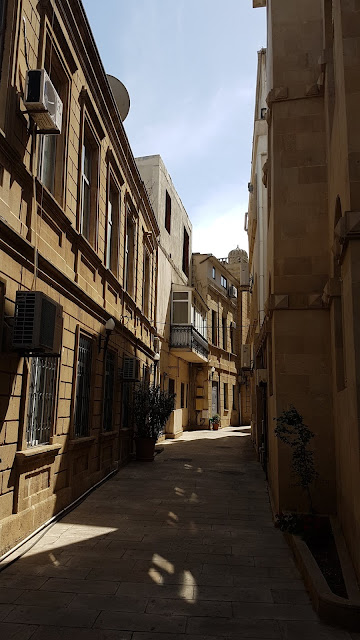 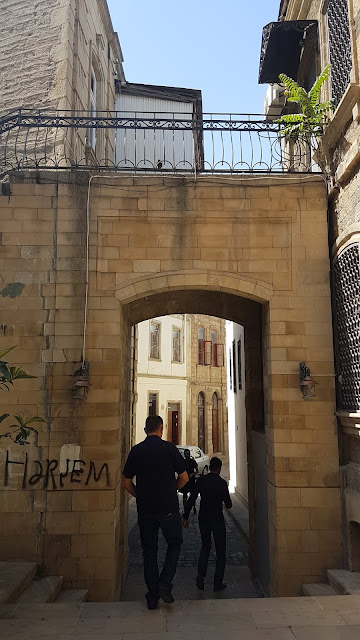 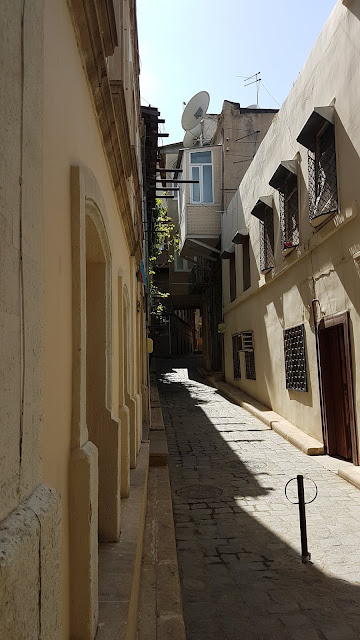 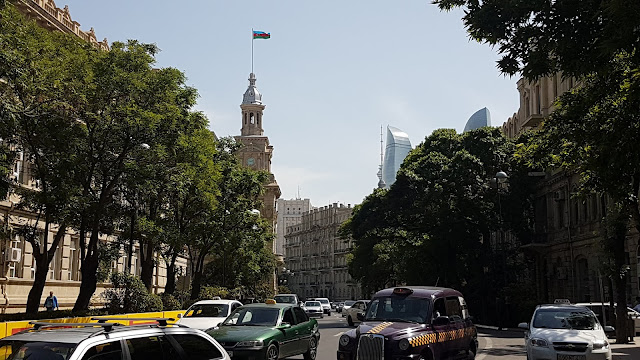 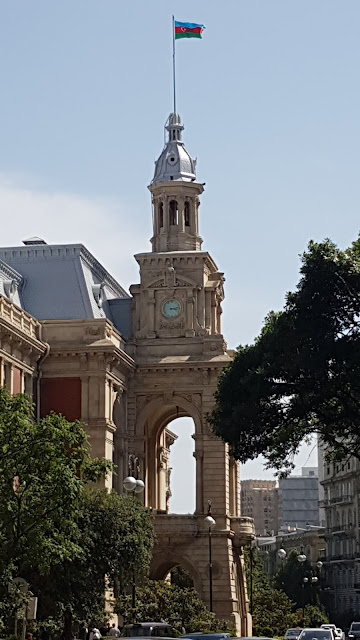 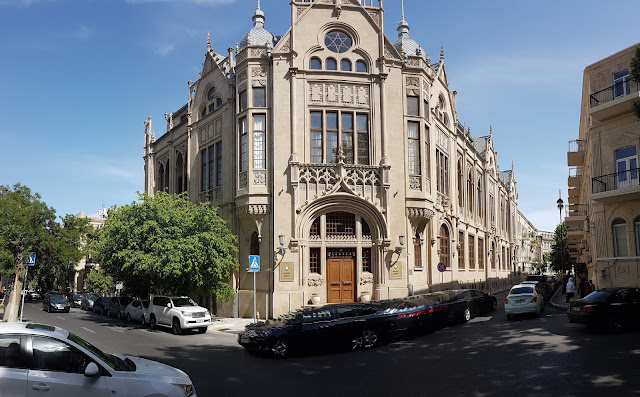 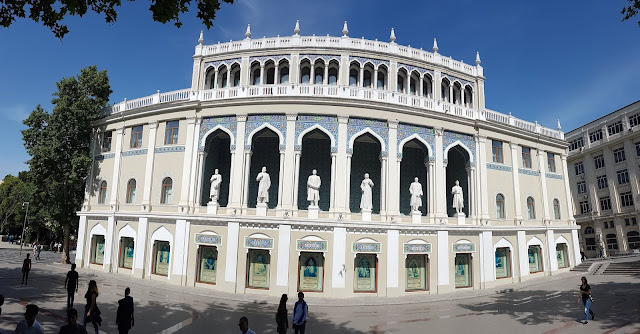 So, all in all, a bit of a frustrating day really.

Never mind, I had made an appointment to meet up with the English chaps again and that was good. We had a few beers and then went to a lovely Azerbaijani restaurant where I had some delicious dishes. 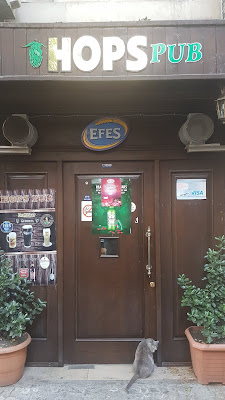 After a few more bevies I hit the sack having got packed and set my alarm for an early wake up.

All good there. The hotel drove me to the airport and I chatted a little to the taxi driver in my very poor Russian.
Posted by Algis Kuliukas at 6:40 AM